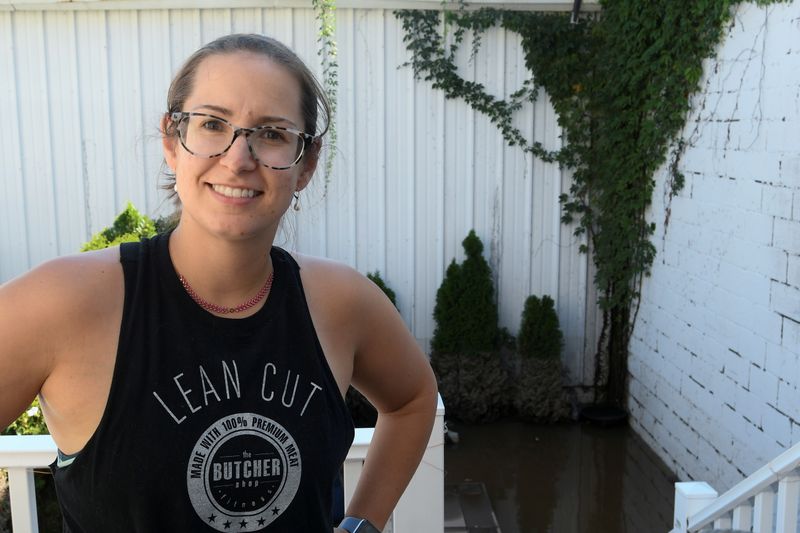 © Reuters. FILE PHOTO: Molly Clarke poses on the deck as the mark left by the water level line is seen on trees in the backyard of a home after Hurricane Ida passed through in Conshohocken, Pennsylvania, U.S., September 2, 2021. REUTERS/Bastiaan Slabbers

CONSHOHOCKEN, Pa. (Reuters) – Molly Clarke went to bed early Wednesday, unconcerned that the remnants of Hurricane Ida barreling through the Philadelphia region would deal more than a glancing blow to her row home.

She woke up Thursday to a shocking scene.

“There was water up to my shoulders in the basement,” said Clarke, 32, who lives in Conshohocken. “The river was in my backyard, and there were cops everywhere.”

That river – the Schuylkill – rose on Thursday to levels not seen since 1869, the National Weather Service said, overpowering the Pennsylvania towns and cities that line its banks. The deluge from Ida trapped residents in their homes and damaged property, forcing water rescues.

Four residents of Montgomery County, where Conshohocken is located, died as a result of the storm, said county spokesperson Kelly Cofrancisco. The toll was part of a bigger path of death and destruction that started in Louisiana and then roared across the U.S. Northeast https://www.reuters.com/world/us/new-york-city-mayor-declares-state-emergency-after-record-breaking-rain-2021-09-02.

The flooding river forced Conshohocken, a community of about 8,000 people, to shut the main highway that connects Philadelphia to its western suburbs. The region’s main rail line was submerged under several feet of water.

Conshohocken had redeveloped its waterfront to attract young working professionals who want to live close to the rail line. On Thursday, many of those residential buildings were inundated.

Local emergency squads waited at the floodline in Conshohocken on Thursday for the waters to recede before starting evacuations of the people living in the apartments between the river and the rail line.

John Porrecca, 71, was one of hundreds of people officials believed to be stuck in their apartments. He said his and his son’s cars were destroyed after being submerged in the water.

On Thursday evening, he said he was planning to stay put and let the water recede rather than get rescued.

“It’s already come down four feet or so, so we are just going to wait,” Porrecca said.