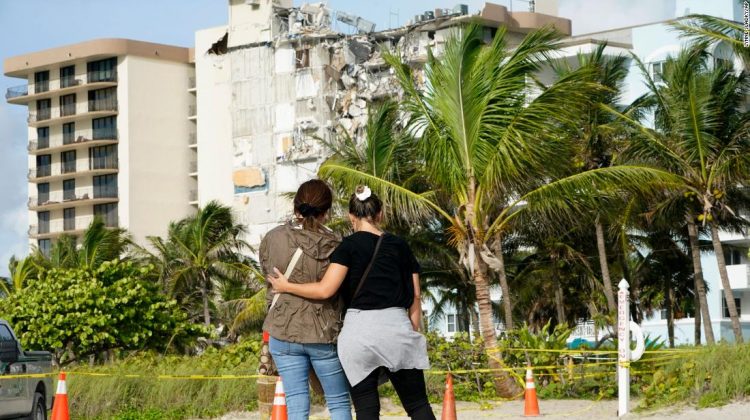 Experts are still looking to determine the exact contributing factors that led to the catastrophe. But from what investigators know, the building appears to have fallen in a “pancake collapse,” Miami-Dade Fire Rescue District Chief Jason Richard told CNN, though evidence of other types of collapses are present, too.

Pancake collapses are dangerous and severe, and their damage can complicate search-and-rescue efforts. Here’s how they happen.

“Pancake collapses tend to ‘stack’ floors on themselves, bringing all their weight down nearly square on the floor below,” Favre told CNN. “This continues down, accumulating more weight and stress as the structure falls.”

A pancake collapse is a “progressive failure” that often begins at the bottom: A load-bearing element is damaged, usually in a building’s lower floors or foundation, which triggers the top floors to collapse vertically into the floors below, said Necati Catbas, a professor in the Department of Civil, Environmental, and Construction Engineering at the University of Central Florida.

“Once there is ‘no’ support at the bottom floors or foundation, the top floors start pounding on the from top to bottom in progressive manner,” Catbas said in an email to CNN.

Pancake collapses occur frequently after major earthquakes, when tremors damage the load-bearing structures in a building or bridge. These kinds of collapses aren’t common in Florida, where buildings are much more vulnerable to wind damage than an earthquake, said Jeffrey Lindsey, a fire and emergency services coordinator and lecturer at the University of Florida.
Lindsey pointed to a notable example of a pancake collapse in Oakland, California: A 1989 earthquake caused the upper deck of a freeway to collapse onto the lower level, raining debris onto cars traveling below it, the Los Angeles Times reported at the time.
But the fall of the World Trade Center’s Twin Towers in the 9/11 attacks is likely the most notable (and dramatic) example. When the hijacked planes struck the side of the towers, they damaged the towers’ vertical bearing capacity, which eventually sent the top floors careening down into the rest of the building, Lindsey said.

Any kind of damage to a building’s foundation or critical support structures can trigger a pancake failure, Catbas said.

A pancake collapse is more dangerous than other collapses, Favre said, because there are often few voids, or pockets of space and air, in the rubble.

“The sheer tonnage of materials … makes it very difficult for void spaces to exist,” Favre said.

Pancake collapses also complicate search-and-rescue missions, he said, because the structures that remain near the collapse site are unstable and could fall as rescuers move through the rubble.

Voids can still be present, though, particularly when multiple kinds of collapses are present, as in the incident in Surfside, said urban search and rescue expert Scott Goldstein.