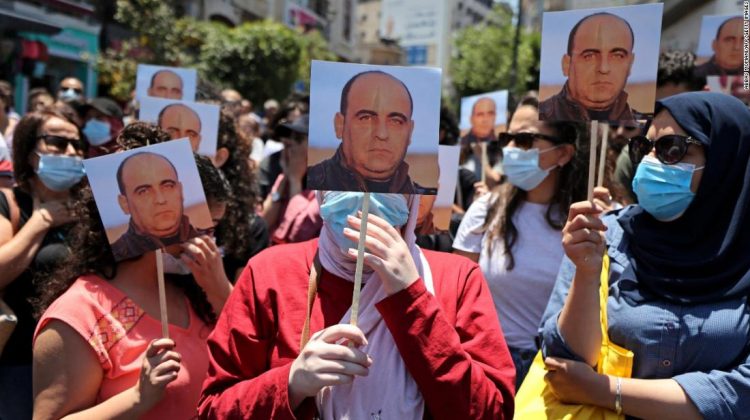 The body of Banat, 45, was borne aloft through the streets of Hebron where he lived, following a funeral ceremony at the mosque. Crowds, estimated by CNN at 15,000 in number, walked behind the body waving Palestinian flags, proclaiming him a martyr.

People chanted, “Abu Mazen is a traitor” — referring to Abbas by the common Arabic kunya “Abu” meaning “father of” — and “The people say, ‘Down with the Authority!'”

Many of the mourners also carried the green flag of Hamas, the Islamist group that runs Gaza, and one of Abbas’s main political rivals.

Anti-PA protests have also been held in Ramallah and in Jerusalem’s Old City outside the al Aqsa mosque.

Banat was a well-known and outspoken critic of Abbas and the PA, using social media to denounce PA leaders for alleged corruption and incompetence.

One of his last posts on Facebook slammed the PA over its botched swap deal with Israel for 1 million doses of the Pfizer vaccine for coronavirus.

He was arrested in the early hours of Thursday in an operation involving about 20 armed officers, his family told CNN, during which he was brutally beaten, the family said.

A preliminary autopsy report released by the Ramallah-based Independent Commission for Human Rights with the blessing of Banat’s family, described injuries “in the form of bruises and abrasions in many areas of the body, including the head, neck, shoulders, chest, back, upper and lower limbs, with cuffing marks on the wrists and rib fractures.”

The report said initial autopsy results indicated an “abnormal” death but said determining the main cause of death would need the results of laboratory tissue tests.

Hebron Governor Jibreen Al Bakri said Banat had died after “his health deteriorated” during the arrest, which he said had been ordered by the PA’s Attorney General.

The PA has said it will launch an inquiry into what happened.

Standing with his grandfather outside the mosque Friday before the funeral ceremony, Nizar’s 6-year-old son, Kifah, told CNN, “I heard from my mother that they assassinated my father. They attacked and killed him, and I don’t know why.”

Jihad Al Khatib, an older resident of the city, told CNN there was no doubt why Banat had been targeted by the PA. “He is the one that speaks against the oppressor, and for the oppressed … They killed the hope in us. They killed him after he exposed their corruption,” he said.

Banat’s death has drawn responses from across the international community.

The US State department said in a statement it was “deeply disturbed” by the death and urged the PA “to conduct a thorough and transparent investigation and to ensure full accountability in this case.”

The statement went on: “We have serious concerns about Palestinian Authority restrictions on the exercise of freedom of expression by Palestinians and harassment of civil society activists and organizations.”

Human rights groups have been concerned for years about what they say is the growing authoritarianism of the PA under President Abbas.

In particular, they are concerned by the 2017 “Law on Electronic Crimes” which allows “arbitrary restrictions on the rights to freedom of expression, privacy and protection of data,” according to Human Rights Watch.

Banat himself was arrested under that law last November and spent several days in detention after posting a video on social media sharply criticizing the PA leadership for the resumption of its policy of security coordination with Israeli forces.

That policy, which sees PA security forces often working closely with Israeli security in the West Bank, had been suspended by Abbas over the threat of annexation by Israel’s government led by then-Prime Minister Benjamin Netanyahu.

Over the years, though, Abbas has generally stuck hard to the policy, under pressure from key international supporters like the United States, the United Kingdom and others, which have been heavily involved in training PA security forces.

Palestinians often see security coordination as assisting Israel in its military occupation of their land, and people in Hebron expressed anger at what they said must have been cooperation with Israel in the operation which resulted in Banat’s death.

“This is a crime in all aspects,” Mazeed Saqf Al-Hait from Nablus told CNN. “The PA is the main suspect in this crime. Israel is a suspect as a partner in this crime because [the PA arrest operation] requires security coordination. Also, the US and the EU are partners in the crime through their financial support to the security forces. It is the system that is criminal and is responsible for the killing and should be held accountable.”

The death comes less than two months after President Abbas canceled elections for the Palestinian Legislative Council, which have not been held since 2006, in a move which drew widespread criticism from many Palestinians.

“It proves that we cannot go on without democratic elections, without legislative authority, without independent judiciary and without separation of powers. Palestine needs more than a security system that is unable to protect its people from Israeli attacks. Palestine needs democracy and elections immediately,” he said.