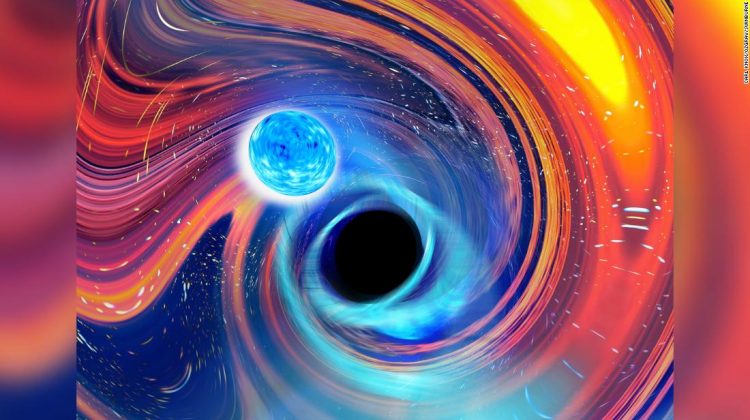 For the first time ever, astronomers have detected two separate instances of black holes swallowing dense neutron stars — and it played out like Pac-Man in space.

The gravitational waves caused by these two events reached Earth in January 2020, allowing astronomers to retrace the ripples in space-time back to when they occurred in distant galaxies 900 million light-years and a billion light-years away.

The study, involving more than a thousand scientists in these detections, published Tuesday in The Astrophysical Journal Letters.

The findings could help scientists unlock secrets of the universe and the diverse origins of gravitational waves.

Gravitational waves are created when massive objects in space move and collide, like a pair of black holes or a pair of neutron stars. While scientists believed that such collisions were possible between black holes and neutron stars, they didn’t have the evidence of such an event — until now.

Black holes and neutron stars are both the result of star death. When stars die, they can collapse into ravenous black holes that consume all of the matter around them. Or they can form a neutron star, an incredibly dense remnant that remains after a star explodes.

The two collision events occurred just 10 days apart, with one detected on January 5, 2020 and the second on January 15. They were detected by the Laser Interferometer Gravitational-Wave Observatory (LIGO) in the US and the Virgo gravitational-wave observatory in Italy.

“These collisions have shaken the Universe to its core and we’ve detected the ripples they have sent hurtling through the cosmos,” said Susan Scott, study coauthor and distinguished professor at the Australian National University’s Research School of Physics in the Centre for Gravitational Astrophysics, in a statement.

“Each collision isn’t just the coming together of two massive and dense objects. It’s really like Pac-Man, with a black hole swallowing its companion neutron star whole. These are remarkable events and we have waited a very long time to witness them. So it’s incredible to finally capture them.”

Evidence of this rare event happening not once, but twice, is like the final piece of the puzzle of astronomers trying to investigate if such collisions between two massive, extreme objects occur.

“With this new discovery of neutron star-black hole mergers outside our galaxy, we have found the missing type of binary. We can finally begin to understand how many of these systems exist, how often they merge, and why we have not yet seen examples in the Milky Way,” said Astrid Lamberts, study coauthor and a Centre national de la recherche scientifique researcher at Observatoire de la Côte d’Azur, in Nice, France, in a statement.

No light was detected from either event, but this didn’t surprise the researchers given the great distance and the fact that the black holes were massive enough to completely swallow the neutron stars.

“These were not events where the black holes munched on the neutron stars like the cookie monster and flung bits and pieces about. That ‘flinging about’ is what would produce light, and we don’t think that happened in these cases,” said Patrick Brady, spokesperson of the LIGO Scientific Collaboration and professor at University of Wisconsin-Milwaukee, in a statement.

Previously, astronomers using the gravitational wave detectors have found candidates for possible neutron star-black hole collisions, both of which occurred in 2019, but they did not have enough evidence to confirm them.

Based on the findings from these latest detections, the researchers believe that one of these violent mergers occurs about once a month within a billion light-years of Earth.

The detectors will be switched on for their fourth observation campaign in the summer of 2022 and will be used to search for more of these rare mergers so they can understand where and how often they occur.

“We’ve now seen the first examples of black holes merging with neutron stars, so we know that they’re out there,” said Maya Fishbach, a NASA Einstein Postdoctoral Fellow and LIGO Scientific Collaboration member.

“But there’s still so much we don’t know about neutron stars and black holes — how small or big they can get, how fast they can spin, how they pair off into merger partners. With future gravitational wave data, we will have the statistics to answer these questions, and ultimately learn how the most extreme objects in our universe are made.”