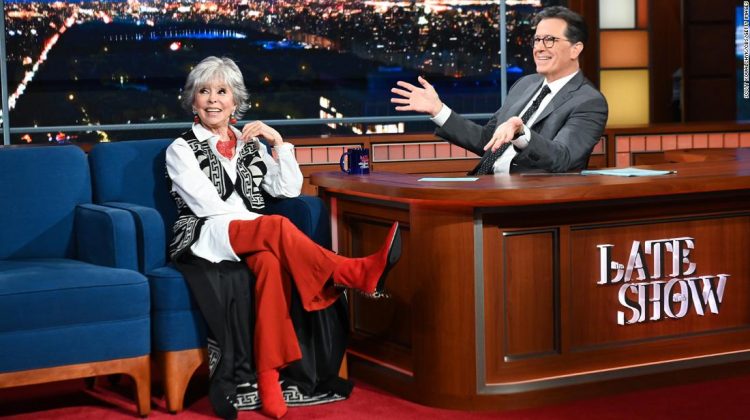 “I’m simply saying, can’t you just wait awhile and leave it alone?” Moreno told CBS host Stephen Colbert in an interview Wednesday night. “It would be so nice if they hadn’t come up with that and left it alone, just for now. I mean, they’re really attacking the wrong person.”
After facing backlash of her own for those comments, Moreno, who once had to darken her own skin for roles, apologized, saying “I’m incredibly disappointed with myself. While making a statement in defense of Lin-Manuel Miranda on the Colbert Show last night, I was clearly dismissive of Black lives that matter in our Latin community.”
Moreno’s apology doesn’t erase the problematic tensions over Latinidad, or “Latino-ness.” What’s notable is that her initial response never declared that Afro-Latinos didn’t have a legitimate complaint — but that when it came to this larger project of Latinidad, they should nonetheless take a metaphorical seat at the back of the bus. Hold off on disrupting the joy of this beautifully produced musical’s moment and fall in line with celebrating the version of Latinx representation that supposedly should be enough. Apparently, displeased Afro-Latinos were, in this formulation, just part of a larger cancel and complaint culture.

Moreno’s take not only seemed to dismiss the legitimate critique of Black Latinos and the large population of Afro-Dominicans in Washington Heights, but also echoed a sentiment that is firmly entrenched in many Latinx communities when it comes to any discussion of race: Don’t touch it. In listening to Moreno, many of us saw and heard some version of our own family members.

In places like Puerto Rico, the same island where Moreno is from and my grandmother was born before departing for New York City in the 1950s, there is a great cultural pride and a strong sense of national identity that many expect to supersede issues of race, which are often seen as divisive and counterproductive.

Many Puerto Ricans are told specifically from the day we are born that we are a proud mix of African, indigenous Taino and Spaniard ancestors. As Latinos, we are one big family, and mixture, or mestizaje, is evidence of equal acceptance of all parts of the mix. There is no problem with racism because we are a melting pot. As argued in “Skin-Color Prejudice and Within-Group Racial Discrimination” in the Hispanic Journal of Behavioral Sciences, “Mestizaje, an ideology whereby everyone was deemed to be of mixed descent, was one of the main strategies the Spaniards used to deemphasize privileges associated with phenotypically White characteristics.”
But statistics and the lived experiences of Afro-Latinos tell a different story about the so-called melting pot. Just like its colonizing owner, the United States, places like Puerto Rico still wrestle with social caste systems that relegate Black Latinos to the bottom and place the lightest and whitest Latinos at the top of the hierarchy. Phrases like pelo malo (bad hair) and “mejorar la raza” (improve the race by marrying a White partner) are still used.
Historically, colonizing forces used racial mixing explicitly to try to whiten and eliminate certain Black and indigenous communities, with European immigration to the island encouraged for this specific purpose. Even in the aftermath of slavery, free Black Latinos were denied the opportunity to have certain jobs and education, confined to the poorest neighborhoods, and had their movement around the island limited.
For my recent documentary “Afro-Latinx Revolution: Puerto Rico,” I interviewed numerous Black Latinx professionals who endure indignities and microaggressions, such as the professor whose students always asked where the teacher was upon meeting her, or a young woman represented by Puerto Rico’s ACLU who got kicked out of a store for simply standing there and being Black.
There is an emerging body of research that suggests darker-skinned Latinos are more likely to have poorer health outcomes than lighter-skinned Latinos. They often are erased from mainstream media representation, and when they appear in television and movies they are typically cast as maids, servants or criminals — if they are cast at all. Afro-Latina beauty queens, such as the Dominican Republic’s Clauvid Daly, are subject to racist abuse. Puerto Rican Blackface characters such as Chianita Gobernadora and Pirulo have been applauded on TV by giddy audience members who still find the caricatures of their darker-skinned Afro-Latinos to be comical. Last year in Colombia, five Afro-Colombian teens were tortured and killed after going to fly kites, leading to a national outcry.
Afro-Latinos may suffer mental health issues related to their ostracization in society. And some may distance themselves from even identifying as Black, out of shame, avoidance of social stigma or outright denial. Organizations like Afro-Latino Festival NYC, Black Latinas Know Collective, and The Afro Latino Forum work tirelessly to foster positive, celebratory spaces for Afro-Latinos and contribute to the public body of knowledge about Black Latinos.

All of this is why it’s crucial to understand that the swelling tide of Afro-Latinx voices who are calling out racism and celebrating Black Latino contributions now are part of a larger movement and a continuum that has always existed.

So when a legendary figure like Rita Moreno tells Afro-Latinos to “wait” on calling out their erasure, that a high-profile Hollywood moment for Latinos shouldn’t be a moment for them too — the message to an entire generation is that their fight doesn’t matter and that non-Black Latinos must be first to advance for all to advance. Sound familiar? It also implies that Afro-Latinos’ desire for representation is trivial, when being visible is part of a larger project of racial justice.

Like critics who didn’t want Colin Kaepernick to protest racial injustice during the national anthem but instead in a more “appropriate” venue, proponents of the “wait, this isn’t the right moment” approach are telling Afro-Latinos not to interrupt the harmonious idea of community and just let the music play.

But the truth is there can be no Latino representation without Afro-Latinos. There is no story of Washington Heights without Black people and Afro-Dominicans of all shades.

To “bring Latino-ness” anywhere as Moreno suggested, Afro-Latinos must be included and welcomed on center stage.