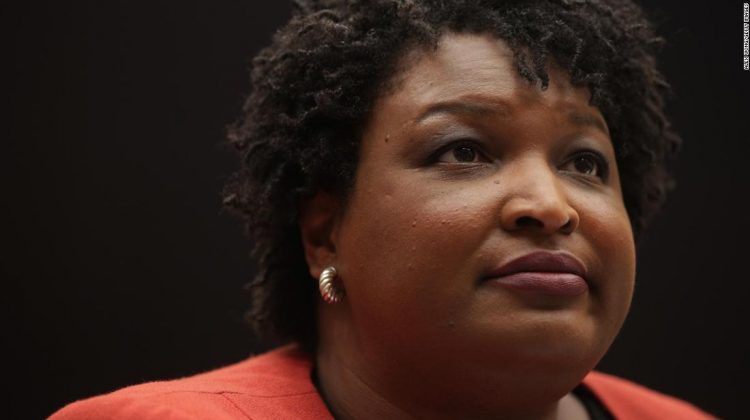 The bill, known as the For the People Act, is sure to fail without the necessary 50th vote from conservative Democratic Sen. Joe Manchin of West Virginia. Last week, Manchin introduced a scaled-down version that would still include provisions to make Election Day a holiday, ban gerrymandering, and require at least 15 consecutive days of early voting. But Manchin’s compromise added what some pundits considered a poison pill — demanding some form of voter identification.
Then came Stacey Abrams. The rising Democratic star and progressive favorite ran for governor of Georgia in 2018, delivered the party’s response to former President Donald Trump’s State of the Union address in 2019, and emerged as a potential vice presidential candidate for Joe Biden’s presidential campaign in 2020. And, last week, she embraced Manchin’s “strong” provisions as “basic building blocks” to “create a level playing field” and “create standards that do not vary from state to state.”

Abrams appears sincere in her desire to make some incremental voting reform in lieu of nothing at all, but she’s also one of the smartest strategists in America, and she likely understands how her support for Manchin’s compromise could help her own political ambitions.

After watching Trump win the presidency in 2016 because of fewer than 80,000 votes in three states and watching her own campaign barely fall short in another heated election two years later, Abrams knows that even the smallest step that Democrats take to make democracy more accessible could still make a significant difference in a close race.
Unfortunately, without filibuster reform, even the limited Manchin compromise has no chance of passage in the Senate. But by supporting a compromise with him, Abrams demonstrates that Democrats have exhausted all options to find common ground on voting rights, and this may finally give the West Virginia senator a nudge to reconsider his emphasis on bipartisanship. Perhaps this explains Manchin’s reported willingness to consider lowering the filibuster threshold.
Still, Abrams’s unexpected openness for the Manchin compromise exposed both politicians to criticism from the right and left. Despite Manchin’s bewildering fantasy of bipartisanship, Republicans quickly began to attack his plan as hers. “When Stacey Abrams immediately endorsed Senator Manchin’s proposal,” Sen. Roy Blunt of Missouri said, “it became the Stacey Abrams substitute, not the Joe Manchin substitute.”
This was no surprise. It is easier for Republicans to vilify a 47-year-old Black woman from Atlanta than a 73-year-old White man from West Virginia. Senate Republican Leader Mitch McConnell, Sen. Lindsey Graham of South Carolina and other Republicans followed suit in attacking the Manchin compromise, as well.
But progressives had their own concerns about Manchin’s compromise. Rep Alexandria Ocasio-Cortez of New York was quick to oppose Manchin’s voter ID proposal. “I’m not supportive of voter ID, especially nationally, and to impose that, I know New Yorkers don’t want that either,” she said.
Ocasio-Cortez is right. Voter ID laws are a solution in search of a problem. Voter fraud is extremely rare in America. Hardly anybody seriously thinks they’re going to be able to change the outcome of a federal election by standing in a long line just so they can cast an illegal vote. If we want to require voter ID, then it should be free and universal, and governments should be required to mail out identification cards to every citizen in their state.
But beyond the question of voter ID, there is concern that another provision in Manchin’s proposed compromise would weaken the John Lewis Voting Rights Act by decreasing the attorney general’s authority to designate a voting rights violation without a judicial finding. It would also prevent the Justice Department from using a consent decree — an agreement between the department and a local government to stop using discriminatory voting practices — as proof that a state had violated the Voting Rights Act.

So, why is Abrams aligning with Manchin’s flawed proposal?

First, her support of the Manchin plan positions Abrams as a consensus builder and makes it harder for Republicans to paint her as a dangerous radical, which some will likely try to do anyway. Abrams ran as a progressive in 2018, and it doesn’t appear that’s likely to change in 2022. But her willingness to compromise could still inoculate her from inevitable GOP attacks.

Second, the Manchin compromise, although woefully inadequate for the national voting rights crisis, may be just enough to meet the statewide challenge in Georgia. And even though it would set a new federal mandate for voter ID, the plan would expand the definition of identification to include utility bills and other forms of ID that are more accessible than state driver’s licenses or official state IDs.
This is part of the reason why even some Democrats who disagree with voter ID are willing to cut Abrams some slack. Abrams is the Democratic Party’s leading national advocate on voting rights. After helping to deliver Georgia’s 16 electoral votes and two US Senate seats to the Democratic Party in the past year, she has unparalleled credibility to negotiate a voting rights compromise. She also won nearly 2 million votes in her 2018 gubernatorial bid and is expected to mount an aggressive challenge to Republican incumbent Brian Kemp in 2022.

So, this is the truth. Even if Manchin’s watered-down compromise becomes law, it still makes it slightly easier for Abrams to win in Georgia by registering potentially thousands of new voters and eliminating just a few of the many unfair barriers to the franchise.

Georgia is ground zero of the nation’s voting rights battle. Abrams lost her 2018 race by nearly 55,000 votes after Kemp, then-Georgia Secretary of State, had purged hundreds of thousands of people from the voting rolls. (Kemp’s office argued that it was normal “voter roll maintenance” to prevent voter fraud, but low-income and minority voters — traditionally blue voters — were more likely to have their registrations canceled, according to the Atlanta Journal-Constitution.) On top of all that, Republicans in Georgia have enacted new voter restrictions this year to make it even harder to vote.

That’s a lot of headwind to overcome for a statewide Black Democratic candidate in the South. Surely, Abrams knows better than anyone that Manchin’s proposal won’t get us to the finish line of racial justice for national voting rights. But it may be just enough to help her become America’s first Black woman governor.