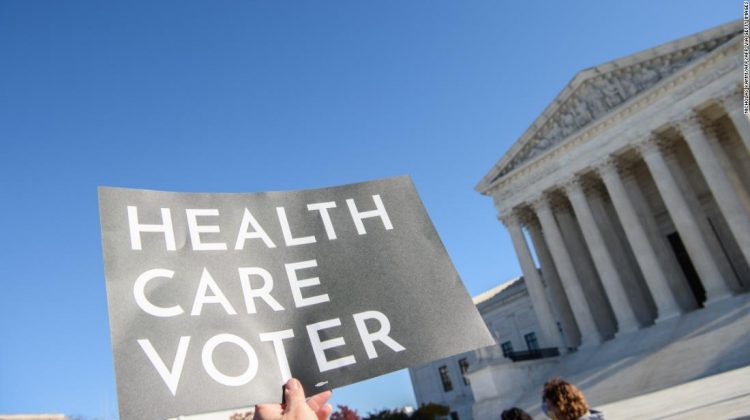 “I didn’t feel well for a while but didn’t have insurance, so I didn’t go to the doctor,” he told me. “I got coverage through Obamacare and finally went. Turns out, I had non-Hodgkin’s Lymphoma, but they caught it in time. I feel like that law saved my life.”

Having grappled myself with an unnavigable health care insurance system as the young father of a child with a chronic illness, I have been overcome thinking about this young man and others who have escaped my nightmare as a result of the ACA.
So, on Thursday, I breathed a sigh of relief when the US Supreme Court dismissed a lawsuit filed by Republican-led states and backed by the former Trump administration asking the court to invalidate the ACA. Even on procedural grounds, the 7-2 majority included two Trump appointees to the high court, Justices Brett Kavanaugh and Amy Coney Barrett, which made it all the more impactful.

After all, destroying the law became an obsession for former President Donald Trump and the right — principally, I suspect, because “Obamacare,” as the ACA became known, was considered a signature accomplishment of his predecessor and my old boss, former President Barack Obama.

From the beginning, opponents of the ACA peddled false narratives about “death panels” and socialized medicine to try and stop it. Trump branded it a “total disaster,” pressuring Congress to dismantle it without offering any plausible substitute.

Yet the law not only has survived serial court challenges and a relentless disinformation campaign, but a full legislative assault from Trump and the Republicans in Congress and numerous administrative decisions aimed at weakening it.

As Obama predicted when it passed, the ACA has become more popular over time, despite the relentless hammering of Trump and right-wing media.

Why? Because it has made Americans more secure.

Today, more than 20 million Americans who would not have had coverage now are insured thanks to the ACA.

More than that, all Americans with a pre-existing condition — like my daughter Lauren, who suffers from epilepsy — no longer can be denied coverage by insurance companies.

All Americans under 26 are eligible to be covered by their parent’s insurance.

Women and older Americans no longer suffer the grotesque cost disparities that existed before the ACA.

Under Obamacare, treatment for mental illness and substance abuse must be covered.

And the list of its insurance reforms goes on.

To be sure, the ACA is not perfect and was damaged by four years of willful subversion by Trump, whose administration’s actions and inaction led to higher deductibles and out-of-pocket costs for policies sold in ACA markets. And millions of Americans live in 12 states that have yet to, or have refused to, expand Medicaid under the ACA, depriving their eligible constituents of coverage.

But I’ve also met countless Americans, like the young man in Chicago, in the years since the ACA passed who have approached me with tears of their own, sharing stories about what it has meant to them and their families.

A woman and her husband chased me down in a parking lot after a speech I made to, of all things, an insurance industry convention out West. She had coverage but also a serious cancer, from which she, too, was recovering.

“The ACA came just in time. We would have hit our lifetime cap for coverage,” she told me, her husband beaming at her side. “We just wanted to say thanks.”

A young father in Peoria, about the same age I was when Lauren began having seizures, told me his 5-year-old son, who was battling a complex medical condition, had coverage due to the ACA. “You can’t imagine our relief,” he told me.

For the life of me, I don’t understand why anyone would want to take that security and peace of mind away from these Americans or any others.

With majority support in the country for the ACA, and a majority of this conservative Supreme Court handing Obamacare opponents yet another defeat, perhaps we will look back at Thursday’s ruling as a watershed moment in this decade-long battle.

It’s a lot to hope for in these fractious times, but maybe, just maybe, the politicians who would drag us back will finally drop their swords and acknowledge that the Affordable Care Act is here to stay.