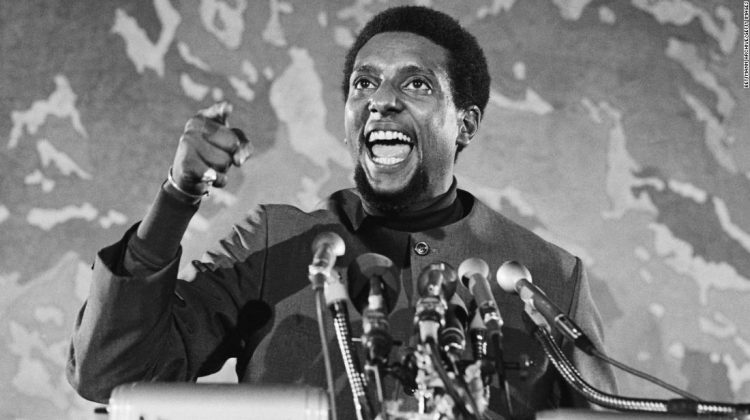 Stokely Carmichael answered the phone this way to acknowledge his role in sacred efforts to build a new society in America and around the world. He defined revolution as transforming the status quo relationship between world systems and societies, institutions and citizens.

Carmichael, who replaced John Lewis as head of the Student Non-Violent Coordinating Committee in 1966, led the largest anti-war demonstration of the 1960s and marched alongside of Martin Luther King Jr. He died of cancer at 57 in 1998 but would have turned 80 on June 29; his legacy casts an enormous shadow (no less than Malcolm X and Martin Luther King Jr.) over 21st century Black politics.

This milestone birthday of Carmichael’s is a moment to observe how today’s Black politics still bears the imprint of an icon who remains underappreciated and misunderstood to this day.

For many, Carmichael will always remain the 24-year-old firebrand who sparked a global political revolution by shouting “Black power!” to exhort a crowd while marching down Mississippi’s Highway 51 arm in arm with Dr. Martin Luther King in the late spring humidity of June 1966. Carmichael had been jailed with future Congressman John Lewis, parried verbally with writer James Baldwin in 1963 as a student at Howard University when Baldwin was invited to campus, listened to Malcolm X speak as a college freshman and served as a bodyguard and driver for King, whom he considered a beloved friend and mentor, in the Mississippi Delta.
“In order for America to really live on a basic principle of human relationships, a new society must be born,” observed Carmichael during a 1966 speech at the University of California at Berkeley. “Racism must die,” he continued. “The economic exploitation of this country of non-white peoples around the world must also die — must also die.”

The parts of Carmichael’s activism that focused on economic justice — he became a socialist during the second half of his life — remain more important now than ever. Carmichael’s legacy spans the movement for Black power, the push for voting rights in the 21st century and the recent political campaigns that have given voice to those seeking more radical change — including socialists, community organizers and Black Lives Matter activists.

There would be no Black Lives Matter movement without Carmichael’s political activism, which spanned the sit-in movement, the freedom rides, Mississippi freedom summer, Selma and beyond. The movement for Black lives owes much of its radical political edge to Carmichael’s organizing, activism and political and cultural rhetoric. He argued that Black lives mattered against the backdrop of the Vietnam War, White backlash and urban rebellions against police violence, structural poverty and systemic racism in the late 1960s.

His 1967 book “Black Power,” co-authored with scholar Charles Hamilton, introduced the term “institutional racism” into the nation’s vocabulary. Carmichael’s activism inspired the Black Panthers (a group he briefly joined as honorary prime minister in 1968), galvanized Black students and ignited a cultural revolution that spanned the world, attracting a rainbow coalition of Black and indigenous activists across the globe.

The election of Black activists to high public office in our own time — from Rep. Cori Bush in Missouri to Rep. Lucy McBath in Georgia — marks a 21st-century translation of this kind of organizing energy into political power. The protests following the murder of George Floyd have made “institutional racism” a part of America’s social lexicon in ways that Carmichael may never even have imagined.

But the current environment of backlash against anti-racist efforts would surely not have surprised him. In his own era, Carmichael combated FBI surveillance, police violence against civil rights demonstrators and racial terror from the Mississippi Delta and the Alabama Black Belt to the gritty urban streets of Harlem, Oakland and Los Angeles.

Over time he came to define the obstacles against Black citizenship as global in scope and systemic in nature, which pushed him to embrace a brand of socialism that found hope for eradicating racism and economic injustice in a society that privileged Black and poor people over profits and invested in systems of justice rather than punishment.

Carmichael’s efforts to forge what he called “a new society” free of White supremacy and systemic racism is flowering in new ways in the age of Black Lives Matter. We can see it especially in the election of progressive Black candidates such as India Walton, the first Black woman to be elected mayor of Buffalo.
Walton, a 38-year-old community organizer and nurse is a self-described socialist whose victory reflects the fact that another world is possible. Portions of Carmichael’s critique of capitalism and racism can be found in her call to reimagine public safety, invest resources in ending poverty instead of punishment, and utilizing local elections in the service of community empowerment.

After his Black power heyday, Carmichael relocated in 1969 to Conakry, Guinea, and changed his name to Kwame Ture in honor of his political mentors (former Ghanaian prime minister Kwame Nkrumah and Guniean President Sekou Toure). For the rest of his life he advocated a form of African socialism rooted in global Black solidarity and defined Black power as an internationally based movement against imperialism, racism and capitalism. He organized the All African People’s Revolutionary Party in hopes of forging a global movement against the triple evils of militarism, racism and materialism that Dr. King also outlined near the end of his own life.

Ture would not be surprised by America’s latest cultural wars: assaults against “critical race theory,” a rhetorical sleight of hand designed to halt efforts at teaching about racial slavery, Jim Crow, Tulsa — in other words, the full depth and breadth of American history. Before the phrase “Black Lives Matter” convulsed the nation, “Black power” produced a similar effect, leading to a national movement for Black Studies programs, expanding Negro History Week into Black History Month, and producing new intellectual, literary and popular depictions of Black American History that continue to reverberate in our own time.

He continued to answer the phone “ready for revolution” even during the lean political years of the 1980s, a decade that represented a reversal of course from the hopeful optimism that guided much of the ambitious Great Society agenda of the 1960s. Ronald Reagan’s presidency successfully reinterpreted the 1960s as a time of liberal political excess and racial overreach, making the freedom dreams of Ture seem anachronistic against the “greed is good” ethos of the period.

Amid that Reagan Revolution a young college student named Barack Obama sat in a Columbia University audience during the early 1980s as Ture talked of organizing a political revolution against racial and economic oppression that seemed as distant as the moon. “His eyes glowed inward,” Obama wrote in his memoir, “Dreams from My Father,” — “the eyes of a madman or a saint.”

The young Carmichael’s call for Black power in 1966 proved remarkably prescient and enduring, evolving from an anti-racist call to resistance into an effort to organize a socialist revolution that could eradicate racism, economic injustice and other forms of oppression. In our own time both aspects of his legacy appear to be flourishing, with efforts to achieve Black liberation through political self-determination and systemic change that would have made the young Stokely Carmichael proud and made Kwame Ture smile.