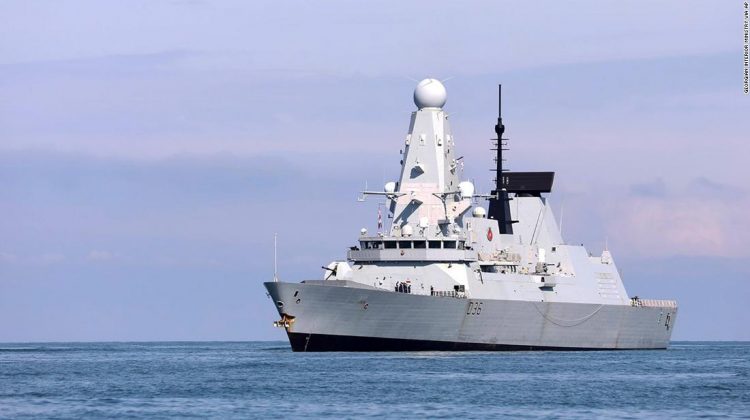 Matters got a bit sticky when the Defender crossed into Crimea’s territorial waters. The Russian military says it fired warning shots across the bow, and then 11 minutes later, two Su-24M bombers dropped bombs in the path of the ship. No damage was done. But the signal was sent.
And if there was any doubt at all, the Russian state news agency TASS and Russian television proclaimed it as part of a Western plot to encircle and undermine Russia, describing the action in vivid detail — part of the Kremlin line suggesting Russia’s most aggressive actions are simply defensive maneuvers to safeguard its interests.
Vivid but wrong, according to the British navy, which claimed no shots were fired at the ship, and no bombs were dropped in its path — although more than 20 Russian planes indeed buzzed overhead. As it happens, there were previously announced Russian gunnery exercises taking place some distance away.
If there had been shots fired in the direction of the British warship in the Black Sea, they would have been the first since the Crimean War in 1854 — the very moment that the term “red lines” was coined by renowned British war correspondent William Howell Russell in his dispatch for The Times of London, referring to lines of red-coated British troops confronting Russian Hussar cavalry. Years later, Russia is looking to draw a new set of lines.
Britain was demonstrating that most of the world still considers Ukraine the rightful owners of Crimea, no matter the territory Russian armed forces may have seized seven years ago and continue to hold. Indeed, the British defense ministry said its warship’s path was part of a “routine transit” from the Ukrainian port of Odessa to Georgia through Ukrainian waters. There even happens to be a ferry route from Odessa to Georgia, though it steers well clear of the southern tip of the Crimean peninsula.
Back in April, the United States disclosed it was even considering sending its own warships into the Black Sea, just to prove that it would in no sense consider ceding that entire waterway to Russia as its own backyard.
For years, China has been doing its best to claim its own mare nostrum (“our sea”), status for the South China Sea by taking over and fortifying scores of islands there. In fact, to prove that’s not acceptable, the British sent its newest aircraft carrier, the HMS Queen Elizabeth, and its entire carrier strike group through the South China Sea in April, just to show that its waters are open to all military as well as commercial shipping. As British Defense Secretary Ben Wallace observed, it’s exercising its right to freedom of navigation.
So, why all this sturm und drang if it might easily get quite nasty? Much of it would appear due precisely to the red lines that are very much in dispute and that Putin, as well as China in its own maritime disputes, seem quite clear in setting and maintaining. Weeks before this month’s G7 summit with US President Joe Biden in Switzerland, Putin was already telling the Russian Federal Assembly, “I hope that no one will think about crossing the ‘red line’ with regard to Russia. We ourselves will determine in each specific case where it will be drawn.”

So, is Putin on edge? Or does he just want to show Biden and the West who’s really in charge post-summit, and establish who is indeed the master of all red lines encircling Russian interests? Or is this all simply Putin’s post-summit posturing? Most likely, all of the above.

It’s certainly not a very good position for the world as we wait to see how Russia plans to react with regards to Ukraine, Syria, Turkey, Iran and the nuclear agreement now under intensive negotiation in Vienna, Austria. The West, and especially the United States, still needs Putin to behave. Fortunately, Biden has the NATO allies, especially the British, very much behind him. Britain, at a most opportune moment, seems to have embarked on a new, aggressive military policy. The Royal Navy says the dispatch of its Queen Elizabeth carrier strike force is the nation’s most powerful naval deployment in a generation.
And none of this is being discouraged by the Biden administration. Ukraine is also flexing its muscles — hosting a joint naval exercise with NATO forces in the Black Sea from June 28 to July 10. Of course, any senses that the country could be moving toward NATO membership, joining the three Baltic Republics of the Soviet Union and most of the old Warsaw Pact military alliance, is calculated to send shivers up Putin’s spine.
And that’s not necessarily such a bad message. Indeed, Putin’s own spokesman, Dmitri Peskov, said the day after the Biden-Putin summit that this would be a “red line” for Moscow, as well as even an action plan for first steps towards joining the alliance. Putin needs to see that the Atlantic alliance is standing together and standing firm in the face of any intimidation he can gin up. Secretary of State Antony Blinken is making the rounds of NATO allies, most recently Germany, then France, to demonstrate America’s spine. Blinken observed that the United States needed its allies to support a “rules-based international order.”

The problem, of course, is that Putin — not to mention China’s Xi Jinping — are doing their best to establish their own international order based on their rules. If it’s simply a test of who’s side is bigger and stronger, then the United States and its allies must simply stand together with even greater determination.