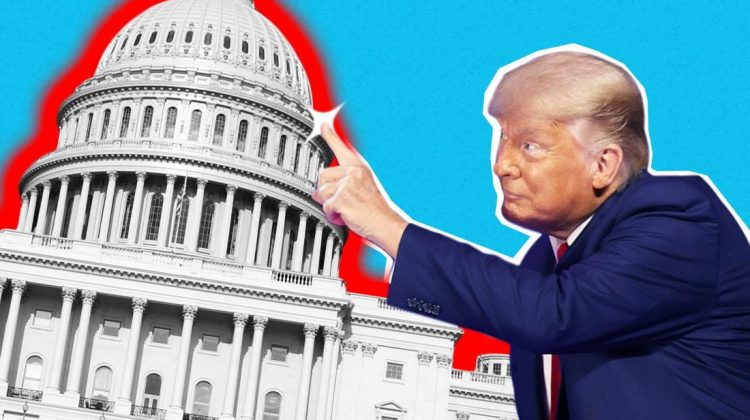 If you are like most Americans, the thought of Trump — the man who incited an act of “domestic terrorism,” as FBI Director Christopher Wray has defined the Jan. 6 attack on the Capitol — as speaker is both appalling and alarming.
Yet it appears some Trump backers are on board — or are at least telling Trump supporters that if the GOP wins the House back in the 2022 midterm election, they may choose Trump as speaker, presumably in the hope it will increase the turnout of their base. (The speaker doesn’t have to be a member of Congress so this scenario is possible.)
First, this again confirms how dangerously out of touch some in Trump World are if they think it’s a winning strategy to elevate a man who incited an attack on that very chamber to become its leader. Second, I can’t think of any other development that could inspire the record number of voters who opposed Trump in 2020 to come out again in 2022 to vote Democratic and prevent Trump from becoming speaker — a position that would put him third in line to be President, according to the rules of presidential succession.
Trump as speaker can’t be dismissed as simply Washington beltway talk. The idea was first raised by Trump’s former campaign manager Steve Bannon in late February, but Trump gave the idea oxygen himself last week on conservative radio when he told the host that idea was “very interesting.”
From there the idea has seen more traction in Trump world. On Thursday, Trump supporter Matt Schlapp, the chair of a prominent conservative organization, told the pro-Trump media outlet Newsmax, “There’s a lot of buzz out there that Donald Trump would even be potentially someone they’d crown as Speaker of the House if the Republicans get the majority back.” Schlapp, whose wife Mercedes worked in the Trump administration and on Trump’s 2020 campaign, added, “It’s an interesting conversation about Trump inserting himself in the fight for the Republicans to get back the majority.”
Then on Friday, House GOP leader Kevin McCarthy was on Fox News, where anchor Brian Kilmeade noted that there was “some talk out there” about Trump being appointed speaker if the GOP won the House back in 2022 “and evidently at Mar-a-Lago he’s considering it.” Kilmeade then asked McCarthy, “Would you be for President Trump becoming Speaker?” McCarthy responded, “You know, I’ve talked to President Trump many times. He tells me he wants to be speaker.” But McCarthy added, “I think he should be President.”
After McCarthy’s words sparked media headlines, his press spokesperson — not McCarthy himself — told a reporter that McCarthy misspoke, in that he meant to say it was him Trump wants to be speaker.

So far, Trump has not said whether he would serve as speaker if asked. But he might find appealing the idea of being the chosen one if the Republicans win the House next year — all without having to face the possibility of another humiliating defeat because his name wouldn’t actually be on the ballot.

It’s true that the position of House speaker doesn’t have anything resembling the power of the presidency — especially if the Democrats retain control of the Senate. But as speaker, Trump could again attract the media attention he so desperately craves. He could also undermine the Biden administration’s agenda by taking up time leading non-stop (baseless) impeachment inquiries into both President Joe Biden and Vice President Kamala Harris — something a GOP-controlled House might be only too happy to support.

There are many issues Democrats in 2022 want to run on, first and foremost Biden’s remarkable handling of the Covid-19 crisis, which even a Fox News poll in late May showed had a 64% approval rating. But I can’t think of a greater motivator for Democrats than turning the 2022 election into a referendum on Trump’s return to national office.
As a reminder, by the time Trump left office in January, he had the lowest approval rating of any President “since scientific polling began,” at 34%, with a 61% disapproval. Plus, a Quinnipiac poll released after the Jan. 6 attack on the Capitol found that 59% of Americans believe Trump should not be allowed to hold office ever again.
The 2022 Democratic campaign ads slamming Trump as possible speaker write themselves. For example, a commercial with clips of Trump speaking at the Jan. 6 rally before the attack, telling the audience, “We are stuck with a President who lost the election by a lot…We’re just not going to let that happen.” And Trump bellowing, “The Democrats are trying to steal the White House. You cannot let them.”
Then we hear Trump tell the agitated audience, “We’re going to walk down to the Capitol,” followed by clips of Trump supporters storming the Capitol, assaulting police offices, chanting “Hang Mike Pence” and declaring during the attack, “Our President wants us here!” The ad could conclude with images of Trump supporters storming the Capitol, as we hear, “Now the Republican Party wants Trump as speaker of the very chamber he incited his supporters to attack.”
Trump World’s new strategy of floating Trump as Speaker of the House is not only an insult to our Republic given Trump’s role in the Jan. 6 insurrection, it is exactly what the Democrats need to animate voters who reject Trumpism to come out to the polls.

If the GOP goes this route it will make the 2022 election a referendum on American democracy — and I’m confident more Americans will choose our democracy over Trumpism.