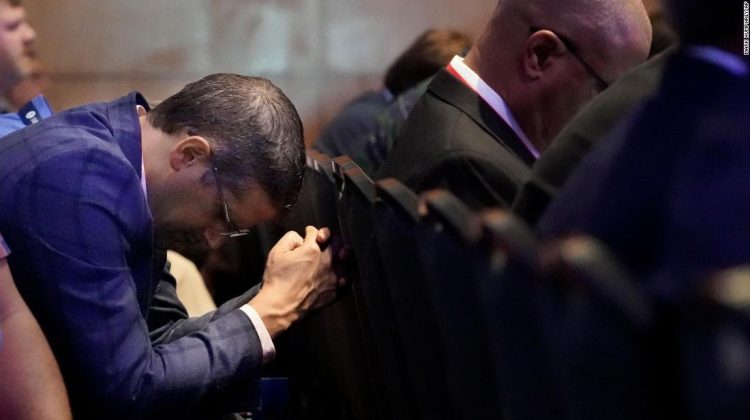 At this year’s SBC, not a single candidate or leader questioned conservative orthodoxy. Instead, outgoing president J.D. Greear praised the previous generation for their victory over theological liberalism. He did, however, criticize how political the denomination had become in recent years, stressing that older battles had calcified into a form of self-righteousness. In effect, he applauded the core message while questioning the attitudes of some of its adherents.
With 14 million members, the SBC is the world’s largest global body of Baptists and the biggest Protestant association in the United States. Their annual meeting, which often reflects larger trends in Republican politics and social issues, always makes news.
Last year’s convention was postponed due to Covid-19, and, in the intervening months, internal tensions swelled over racism, sexism and the handling of accusations of sexual abuse. Of particular focus has been critical race theory (CRT), which the 2019 gathering had approved for use in SBC institutions as an “analytical” tool “subordinate to Scripture.” Their carefully worded and conditional approval was seen by many in the denomination as evidence of a leftward drift, and resurgent conservatives organized in advance of the 2021 meeting to stop further spread of what they believe to be anti-biblical ideas.
For weeks, as internal pre-convention fights spilled into public view — most notably a letter from Dr. Russell Moore detailing his reasoning for departing the SBC — mainstream news and social media were alight with talk of a possible schism, a potential split between a hyper-conservative group with Trump-influenced politics (who backed Georgia pastor Mike Stone’s candidacy to lead SBC) and a more moderate-conservative group willing to address some concerns of racial injustice and sexual misconduct in their ranks (who supported Litton, an Alabama pastor).
In a surprise move Tuesday, delegates rejected the far-right, anti-CRT candidate for the lesser-known pastor with a history of working toward racial reconciliation. The vote was close, the new president winning by a small 2% margin revealing a sizable division in the denomination. The losing candidate was gracious, but his supporters were quick to say that they would continue their fight. The convention, meanwhile, seems to have continued in a status quo direction by voting down some of the most draconian resolutions proposed by the radical conservatives (such as a harsh condemnation of women who had abortions), and referring action on more controversial issues (such as handling charges of sexual abuse) to committees.
Those who anticipated — or even hoped for — a schism in the SBC will go away from this meeting disappointed, and there will be more than one opinion piece written about how the moderating outcome of the SBC might quietly signal the end of extreme Trumpism in White evangelicalism. But the truth of the matter is that there are no clear winners. This week was just another skirmish in a very long history of what sociologist Nancy Ammerman called the “Baptist battles.”
Watching this week’s meeting unfold took me back to an autumn day in 1987 in Durham, North Carolina. I was grading papers from my Duke Divinity School students; in the background, the television was tuned to afternoon soap operas. The program abruptly stopped, the local news anchor appeared on screen and announced a breaking news story: “Fundamentalists take over Southeastern Seminary in Wake Forest. News at 6.” Southeastern, known for academic excellence and theological inclusion (having educated the first woman to be ordained as a Southern Baptist pastor), was the latest seminary to succumb to a then-raging conservative crusade against liberalism in the denomination.

Southern Baptists had been fighting since the late 1970s over a so-called leftward drift in the denomination. The seventies were the high-water mark of progressive evangelicalism, a social activist brand of conservative Protestantism (represented by figures like Jim Wallis and Sojourners magazine) that was widely popular, especially among younger evangelical Christians who opposed to the Vietnam War, embraced feminism and civil rights and sought to address economic injustice. In 1976, they had coalesced around the election of Jimmy Carter, a Southern Baptist evangelical, whose concerns largely reflected their own.

But conservative evangelicals never liked or trusted their more progressive kin, accusing them of embracing liberal culture more than following the dictates of Scripture. In the same year that Jimmy Carter was elected, they launched a counterattack in the form of a book entitled “The Battle for the Bible.” Its author, Harold Lindsell, a seminary professor and the powerful editor of Christianity Today magazine, warned that evangelical progressives no longer believed that the Bible was the inerrant word of God. Feminism, social justice, racial equality — all these things resulted from liberal biblical criticism and liberation theology.
He called for a crusade to purify the ranks. In 1981, Lindsell addressed the Southern Baptist Convention, saying:

“The only Jesus I know is the Jesus of the Bible. There is no other Jesus. If the liberal critics are right and Jesus didn’t say half of the things that are attributed to him, then I’ve got some real problems, because I can’t be sure that even the things they attribute to him (are things) he really said.”

The battle for the Bible raged in evangelical institutions, especially in colleges and seminaries, but nowhere did it have a greater impact than in the Southern Baptist Convention. Conservatives took up Lindsell’s call and turned the fight over biblical inerrancy into a battle to save the denomination and American society from the evils of liberalism.
As Baptist fundamentalists gained power, they fired seminary faculty, kicked out pastors and congregations and manipulated the church’s governing structures to serve conservative political ends. They played a key role in the emergence of Moral Majority and the religious right, recruiting a majority of Southern Baptists as a voting bloc for the Republican Party.
In the 1980s, fearing the possibility of regional isolation and cultural death, many SBC leaders believed that they could attract new members by spreading the Good News of God’s hierarchy by political means through the Republican Party. It seemed to work at first, but ultimately, it didn’t. Many Baptists left and formed alternative denominational fellowships. Growth slowed, plateaued and began a dramatic decline. The SBC is now smaller than it was in 1987, the year of the fundamentalist takeover of the seminary in Wake Forest.

Defeating liberalism has not grown the church. The political message of a godly hierarchy of White men isn’t good news to most Americans — especially younger ones, even today’s leaders’ own children, many of whom have embraced equality and pluralism. Now what? Ed Litton and SBC leadership are left with a nearly impossible task — maintain a conservative and traditionalist reading of the Bible while embracing race and gender equality in hopes of tempering what many younger Americans see as the political hypocrisy and sin embedded in the Trump-aligned wing of the SBC. At best, at least right now, this will likely result in tinkering around institutional edges in an effort to soften their image — without any theological change — hoping to keep more people of color, women, and young adults from leaving the church.

Meanwhile, the anti-CRT ultraconservatives haven’t given up just because their candidate didn’t take the SBC presidency. They want to maintain both the political and purity tests of the SBC. “If we do not prevail today, we will come back next year and the next year and the next year,” hard-line conservative leader Rod Martin told a group of supporters this week. Most of Jesus’s apostles, he pointed out, were eventually martyred. “We are here to the death! We will not stop.”
George Marsden, the noted historian of American fundamentalism, often quipped that a fundamentalist is an evangelical who is mad about something. Once again, the Southern Baptist Convention has shown that America has no shortage of fundamentalists. And right now, in this first year post-Trump, they seem to be mostly mad at their own family.