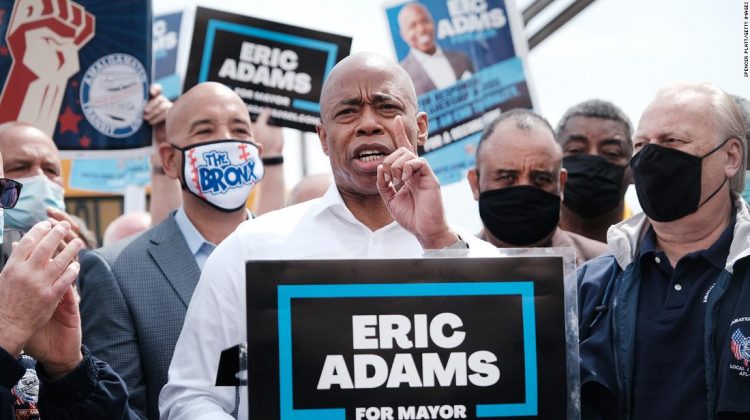 The race offers a window into issues of crime, race, social justice and economic inequality that will resonate well beyond the confines of the city and could end up setting the agenda of a Democratic Party seeking to satisfy and expand its restive, politically potent urban base. Furthermore, winning the Democratic primary normally spells victory in November given the city’s political makeup.

Here are seven important things to know about the contest.

1. Crime is the number one issue voters are concerned about

New York is in the middle of a crime spike, with homicides up 53% over the last two years and shootings up by more than 100%. Democrats have told pollsters that crime and public safety are their top concerns by a wide margin — giving a huge boost to candidate Eric Adams, a former state senator who spent 22 years in the New York Police Department before going into politics.
Adams, the Brooklyn borough president since 2014, has vowed to create a specialized unit to tackle gun violence and would reassign detectives from lower-crime districts into areas where violence is surging. His rivals have tried to change the subject from public safety, with some claiming his proposed crackdown on gun violence would bring back controversial stop-and-frisk tactics that a federal court ruled unconstitutional in 2013.
“The worst idea I’ve ever heard is bringing back stop and frisk and the anti-crime unit from Eric Adams,” candidate Maya Wiley said in the final televised debate last week. “Which, one, is racist, two, is unconstitutional, and three, didn’t stop any crime, and four, it will not happen in a Maya Wiley administration.”
Wiley, a progressive civil rights attorney endorsed by US Rep. Alexandria Ocasio-Cortez and US Sen. Elizabeth Warren, is calling for sharp cuts to the NYPD budget and the creation of an all-civilian board to oversee the department. The high-profile battle between Wiley and Adams is a microcosm of a national debate over whether it’s best to quell street violence through targeted policing or by investing in jobs, education, mental health treatment and other services that erode the causes of violent crime.

2. The winner will almost certainly be a woman or person of color

All but one of the city’s 109 mayors — dating back to 1665 — have been white men, and none have been women. The sole Black mayor, David Dinkins, was voted out of office in 1993 after serving a single term. This year, the top four contenders, according to the polls, include two Black candidates, two women and one Asian-American.

New York isn’t as progressive as many outsiders think: from 1994 to 2002, across five consecutive terms, the city elected Republicans to City Hall. This year, contenders running from the left included city comptroller Scott Stringer, a political veteran running as a progressive with solid knowledge of how to get things done, and Dianne Morales, a former teacher and social services executive.
Both candidates ran into serious problems. Stringer was accused of harassing behavior by two different women and saw endorsements rescinded by key political supporters, including the left-leaning Working Families Party. Stringer saw his fund raising dry up: in the final period before the primary, he raised less than $50,000. The city comptroller has categorically denied the accusations. Morales suffered a staff revolt that included resignations by key aides, a strike by campaign staffers demanding to form a union and ultimately the summary firing of dozens of workers by Morales to get the effort back on track.

Wiley has tried to assemble the broken pieces of both candidacies, touting herself as the most progressive contender who can actually win. The outcome on primary day will tell whether she succeeded.

As a former presidential candidate, Yang started the race with high name recognition and was initially leading in opinion polls, but that advantage has evaporated in recent weeks. Yang’s problems stemmed from a lack of political experience: not only has he never run for public office other than the presidency, records show he never voted in municipal elections during the 20-plus years he has lived in the city, and was attacked by his rivals for leaving the city during the pandemic to stay with his family in a vacation home.

But Yang is still very much in the hunt. With many of the city’s powerful officials and unions already committed to other candidates, Yang has built an unusual coalition that includes young voters — an extension of his presidential policies like lowering the voting age to 16. Yang has also made inroads with Orthodox Jews and has stirred excitement in Chinatown and other neighborhoods with the prospect of becoming the city’s first-ever Asian-American mayor. “He’s our Shirley Chisholm” is how one Taiwanese-born state senator, John Liu, put it — a reference to Chisholm’s history-making feat of becoming the first Black woman elected to Congress.
The last census showed Asian-Americans to be the fastest-growing ethnic group in New York — one that has been mobilized in reaction to an alarming wave of anti-Asian hate crimes in the last year. Yang is banking on converting that growth and energy into votes.

5. Several heavy-hitters in the race have never run for office before

Some of the best-funded candidates, with unusually impressive management credentials, are new to politics. Ray McGuire, a former ex-head of investment banking at Citigroup, has raised more than $10 million for the race and is asking voters to think outside the box when picking a mayor. “We need leadership that meets the moment. And today we don’t have that leadership,” McGuire told me. “It is very clear that this city has been ineptly managed.”
Shaun Donovan served as secretary of Housing and Urban Development and director of the Office of Management and Budget under President Barack Obama; before that, he was New York’s housing commissioner under Mayor Mike Bloomberg. Those sterling credentials — plus a multi-million-dollar donation by his father to a political organization that supports Donovan — have not lifted him out of the single digits in polling, where he remains with McGuire.

6. New York’s primary is happening at an unusual time of year, under brand new rules

New York is, for the first time, using ranked-choice voting (RCV) for citywide races. Under ranked choice, voters will select their top five candidates in order of preference. If no candidate wins 50% or more of the vote, the lowest vote-getter is eliminated and their votes are reallocated to whoever his or her supporters ranked second. The numbers then get recalculated, and the process repeats until a candidate gets more than 50%.

RCV has been used in Oakland, San Francisco and the state of Maine, but never in a jurisdiction even half the size of New York City. We’ve already encountered bureaucratic delays and conflicting laws that raise fears a winner won’t be declared for weeks after the primary.

7. The logic of ranked choice voting has led rival candidates to team up

Katherine Garcia, a former sanitation commissioner who ran New York’s emergency food program during the pandemic, has been critical of Yang, and he has returned the attacks. But in the final days, the two have teamed up, campaigning together before the primary in the hope that core supporters will rank the aligned candidate as No. 2 on the ballot — a strategy that occasionally helps second-place finishers gather enough votes to move up in subsequent rounds and win ranked-choice elections.

Adams heads into the primary with a firm but not commanding lead. Wiley and Garcia have been rising in recent polls, raising the possibility of New York electing its first woman mayor. Yang may end up re-writing the script of how mayors get elected. And the overall uncertainty of ranked choice voting makes it hard to predict the political direction of post-pandemic New York.