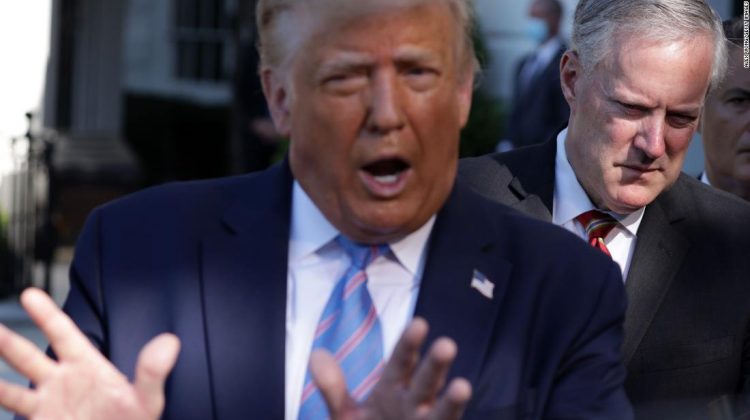 The emails themselves look like the stuff that normally gets routed to your spam folder: wild conspiracy theories about election fraud, absurd suggestions on strategy to overturn the already-completed and certified election, desperate entreaties from unhinged fantasists dreaming of flipping the election’s outcome. But these were not junk emails from some trolls — they were sent from the top echelons of power in the White House to the Justice Department, in a genuine effort to overturn an American election.

In a sense, none of this is surprising. The emails, sent in December 2020 and January 2021 — well after it was clear to any reasonable person that the election was over and Joe Biden had defeated Trump — are the inevitable end result of four years of Trump using the Justice Department as a political tool, with US Attorneys General Jeff Sessions and William Barr largely playing right along.
At times, Trump and his largely compliant attorneys general used the Justice Department to shield politically-connected people from consequences for their conduct. Barr protected Trump when he infamously misled Congress and the American public about the findings of special counsel Robert Mueller’s report. Later, after public entreaties by Trump, Barr intervened in an unprecedented manner to undermine his own department’s prosecutions of Michael Flynn and Roger Stone (both of whom later received full pardons from Trump).
Even more disturbing, new evidence has emerged suggesting that Trump’s Justice Department served not only as a shield for the powerful but also as a weapon to pursue his perceived political opponents. The Justice Department secretly obtained private phone records from media outlets (including CNN), which had been the subject of public attacks by Trump, Democratic members of Congress, their families and staff, and even Trump’s own White House counsel, Don McGahn. Congress and the Justice Department now must investigate disturbing questions about how and why these investigations were initiated and carried out in secret.
The newly-disclosed emails from then-White House chief of staff Mark Meadows and other officials to top Justice Department brass reveal yet another dangerous abuse of power to benefit Trump. This time, Trump’s advisers, in a desperate quest to lend institutional heft to their manic ravings about election fraud, tried to enlist perhaps the most powerful ally of all: the Justice Department.

Thankfully, the Justice Department declined to act upon the ravings of Trump’s advisers, to the credit of then-acting Attorney General Jeffrey Rosen (who had taken over after Barr’s departure in December 2020) and other top brass.

The emailed reactions of officials within the department appropriately reflect a sense of incredulity and dismay at the efforts of Trump’s staffers to get them on board with trying to overturn a democratic election. In one internal Justice Department email, Rosen asks “Can you believe this?” and in another, a top department adviser characterized the White House’s outreach as “pure insanity.”

“Pure insanity,” indeed. But it’s worse than that, really. In one respect, the White House acted from a sense of delusion, both about the actual outcome of the 2020 election and about its chances to reverse it.

But in a more sinister sense, Trump and his top advisers acted purposefully and deliberately. Their efforts to steal an election and undercut democracy are as clear as the words on the page. And as the efforts of Trump and his followers to continue spreading the Big Lie continue and intensify, we need to remember just how close Trump and his enablers came to succeeding the first time.

Robert (Arizona): Has the new Justice Department shown any willingness to revisit the policy against formally charging a sitting president with a crime?

No. The Justice Department’s policy against indicting a sitting president was adopted in 1973 and updated and reaffirmed in 2000. More recently, in 2019, special counsel Robert Mueller cited the policy as a primary reason for his decision to neither charge Trump with any crime nor state clearly whether he found that Trump had in fact committed a crime.

The policy at issue is strictly of the Justice Department’s own making; it is not encoded in any statute or Supreme Court decision. Therefore, the Justice Department is free to revisit and perhaps revise the policy, if it so chooses. To date, however, neither Attorney General Merrick Garland nor any of his top brass have given any public indication that they intend to reexamine the no-indictment policy.

Greg (Canada): If Congress doesn’t act, does the attorney general have the authority to set up a commission to investigate the January 6 Capitol insurrection?

The attorney general certainly does have the authority to investigate the Capitol insurrection for potential criminality. Indeed, the Justice Department already has charged more than 400 people with crimes relating to the January 6 attack on the Capitol, including the recent indictment of several members of the Oath Keepers.

A commission, however, would likely be tasked with a broader mission to investigate and report on the Capitol insurrection, beyond criminal charges. While the attorney general theoretically could appoint a team to conduct such an investigation, that would not fall comfortably within the Justice Department’s typical function of investigating and bringing criminal charges (and civil lawsuits).