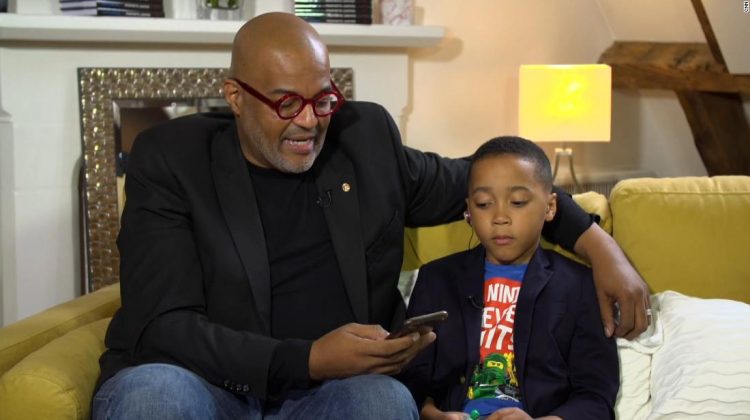 “Who’s that for?” I asked. My son explained that it was for twins, one of whom had announced that they didn’t want to sit next to him because they “don’t like boys with brown skin.” (The other thought it was rubbish.) At near 7 years old, he had just met racism for the first time.

Over the days and weeks that followed this revelation, I would find myself buffeted by a whirlwind of emotions, one after the other; an experience much akin, I now realize, to going through the seven stages of grief …

The shock smashes through the scene of relaxed domestic contentment like an emotional wrecking ball. My heart plummets into my feet. And while my son is merely baffled — “I don’t know what’s wrong with my skin, Papa” — I am utterly horrified. “Lord!” I plead silently, “Surely not my gentle boy, not so soon?” It takes all my strength to keep my expression calm and my voice steady, but I can’t stop wringing my hands.

As soon as I’m alone the tears come. And they keep on coming, for days. Mine is the anguish of many Black parents who grapple with this lived experience and who would give anything not to be able to envision the future so clearly. I know that my child will probably one day look back on this incident as the first of many. He will recognize it as marking the beginning of a lifetime of being the target of some people’s hate because of the color of his skin. I know that his bafflement will turn to hurt and his hurt will turn to fear. I know he’ll gradually lose his easily trusting nature and his expectation that he will be universally appreciated for being caring and funny and enthusiastic — just for being him. And I can’t bear it.

When the anger hits me, it takes over. I’m furious, outraged, incandescent. I’ve worked so hard to protect my son — I’ve tried to surround him with loving, inclusive people; we even moved from the US to the UK because I believed he would be safer on this side of the Atlantic (where most police officers don’t carry guns). For what? To find racism right here, in his face, inescapable? It hits me that I might hope to keep his body safe from bullets, but I can’t prevent his heart from being pierced by hate.

I’m angry — not at any children, all of whom are innocent — but at the reciprocal adult conversations that fail to take place in the days and weeks that follow, the lack of an explanation that would in some way heal the hurt and the myriad missed opportunities for learning. I’m angry at the sorry state of the world, that we should still be dealing with the false construct of race and its consequences when there is so much else that we should be focusing on.

Most of all, though, I’m angry at myself …

I become convinced that I have made my son uniquely vulnerable; this terrifies me. Maybe my academic work of deconstructing race shouldn’t have found its way into our home? Was I wrong to have taught him to always react with compassion and empathy, but how will these qualities keep him from being damaged? When he’s older, how will reasoning with the perpetrators of hate help him if he’s in a potentially dangerous situation? Now I want him to get mad, to stick up for himself. I tell myself it’s my fault that he didn’t yell in disdain, “There’s nothing wrong with brown skin!” I feel sullied by my own reaction — what kind of father wishes his child would lash out? I don’t want all this negativity to become seeded in my heart, but I am lost.

As ever, it is prayer that finally lifts me out of my despondency. God invariably provides an answer; this time is no different. Out of nowhere one day I find myself singing a hymn by Margaret Pleasant Douroux: “Give me a clean heart, so I may serve Thee. Lord, fix my heart, so that I may be used by Thee. For I’m not worthy of all these blessings. Give me a clean heart, and I’ll follow Thee.” Gradually, as I sing, I find a path back to my usual self, and I feel capable of forgiveness. I’m able to own my emotions — my simple humanity — and start to set them aside. And as the fog in my mind dissipates, I recognize the way in which my son handled his first racist incident for what it is: miraculous.

Silence may have descended around this particular story in our little corner of the planet, but it strikes me that, next time, maybe we can all do better. Ruby Bridges, who was the first African American child to integrate the all-White William Frantz Elementary School in New Orleans in 1960, once said to me, “Racism has no place in the hearts and minds of our children. It’s a grown-up disease.” Sadly, schools can’t request that students be inoculated against racism before they are enrolled. Parents and teachers must be brave and have the courage to explain to children, in an age-appropriate way, that racist language is wrong, and why. When something hurtful is said about a child’s skin color, culture or heritage, it’s the adults’ job to initiate brave conversations that lead to learning and healing, not turn a blind eye. We can’t wish racism away by pretending it doesn’t exist, but we can seek to counter it with courage and honesty.

If we all work together with the common goal of eradicating racism, I truly believe we can create a better society for all our children, whatever the color of their skin. I hope that my son’s children, and their children, will never come across race-based hate, but if they do, I pray I will have passed down effective coping mechanisms rather than trauma. But I suspect my son already has this completely right. How did he react to his first experience of racism? With a level of empathy, compassion and love that fills me with both optimism and admiration. Here is the message he painstakingly wrote in rainbow colors in his card: “You may not like me, but I love you. Because I love all people.”

As for me, I will keep on singing …