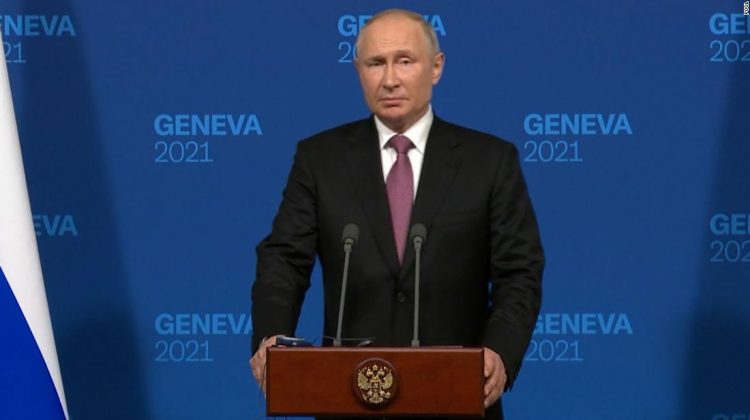 Any of these incidents would have been good reason for Biden to call off a summit that never should have existed. Now that it’s over, I’m even more mystified as to why it happened at all.

I can answer for Putin, of course. Dictators love events that put them on an equal footing with democratic leaders and sitting one-on-one with the president of the United States is the most coveted prize of all. Putin already scored a major victory the moment the summit was announced, especially since Biden himself proposed the meeting. For Putin, it wasn’t just a meeting between heads of government — for him, it was literally the highest point, the top of the world.
Putin, who has been legitimized on the world stage and enabled by trade and economic relations with the West, has constructed a massive, well-funded police state in Russia in the 21 years since he came to power. The only real threat to Putin is losing the support of his billionaire cronies, the mafia that runs Russia and spreads its corruption around the world. As long as he guarantees their assets abroad—the cash and real estate and firms they have established so they and their families don’t have to live in Russia—Putin is safe.
It doesn’t matter how many sanctions the US and Europe apply on Russia, even the more effective ones under the Magnitsky Act. If Putin is still recognized as the big boss by both his oligarchs and leaders around the world, he won’t see any reason to change his aggressive behavior. Why should he? For Putin, a summit that elevates him to the standing of the American President will only embolden him. His thinking likely goes something like this: “Biden called me a killer, but he’s still shaking my hand and smiling. I’m not going anywhere.”
As for the Biden administration, National Security Adviser Jake Sullivan acknowledged there were no “deliverables” ahead of the Geneva summit and explained that the meeting was “an opportunity to communicate from our president to their president what American intentions and capabilities are and to [hear] the same from their side.” But why not leverage what Putin wants most — power and status on the world stage — and use it to demand an end to his aggression, from murder campaigns and election interference abroad to his ongoing invasion of Ukraine? Even if the US doesn’t care about the demise of Russian civil society—and it’s become clear over the last two decades that the West doesn’t—Putin’s war against the international order demands a response.

Instead, all we heard was that it was important for the two leaders to meet. Why? Because it is important for them to meet! For the leader of the democratic free world, a summit isn’t supposed to be a goal unto itself. Talking just to talk isn’t a goal. American national security is. As is recognizing Ukrainian sovereignty, maintaining the international order and putting a stop to cyberattacks, assassination plots and attacks on dissidents. Ultimately, Biden cannot advance those objectives by normalizing Putin and dictatorships in general.

While the summit itself never should have taken place, it wasn’t nearly as bad as it could have been. It’s a blessing when bad food comes in small portions — and the meeting between Biden and Putin was shorter than expected. Biden’s supporters came out to tout their man’s performance, contrasting his wise words and serious mien with Donald Trump’s confused and obsequious mewling when he met Putin three years ago in Helsinki.
Boasting about a better performance than Trump is to damn with faint praise, especially where Putin is concerned. It’s the results that matter. Putin doesn’t care if Biden sounds strong. He doesn’t care if some American journalists ask him tough questions to flaunt the fact that he cannot have them beaten or jailed the way he does their Russian counterparts. (Those tough questions, by the way, were far tamer when the translator presented them to Putin in Russian during the press conference.)
Of course, those are all good developments. I don’t wish to appear unappreciative that Biden highlighted human rights in a way his predecessor never would, or that reporters brought up Navalny’s plight. But these things aren’t going to change Putin’s behavior, whereas the summit elevates and emboldens him.
I watched Putin’s press conference after the summit meeting, but since Russians have heard most of his lies and evasions for years, there wasn’t much new for me. The foreign audience seemed shocked when Putin said Navalny had only himself to blame for consciously breaking parole by leaving the country — even though Navalny was evacuated to Germany in a poison-induced coma. He also tried to justify the Russian invasion of Crimea in 2014 (which he used to deny) by arguing that it had introduced “stability” after the independent nation struggled to free itself from Putin’s grip. Putin also denied responsibility for cyberattacks and blamed the US for being the biggest offender.
These are examples of the absurd, reality-twisting nonsense Russians are fed 24-7 by the state-controlled media, and Putin was delighted to have the chance to spread it around the world. Had Biden wanted to send a real message to Putin, he would have met instead with Volodymyr Zelensky, the president of Ukraine. Or with Sviatlana Tsikhanouskaya, the leading opposition candidate in Belarus’ sham elections last year, who is now living in exile after fleeing persecution by Putin’s loyal servant Belarusian despot Alexander Lukashenko. Or Biden could have extended a White House invitation to the families of Putin’s many victims.
Before leaving for Geneva to meet Mikhail Gorbachev in 1985, Ronald Reagan said in his address to the nation, “People don’t start wars, governments do.” But Putin is the only government in Russia, and he started a war on the free world. He will keep fighting it — and winning — until his targets fight back.
The summit was a mistake, but Biden is no fool. He can rectify the error and take measures to contain and deter Putin by targeting his oligarchs and thugs and their dirty money, as recommended by Navalny’s organization. Biden can also support Ukraine and Putin’s other targets, and work to remove Russia from the international organizations it manipulates and corrupts.

Biden had better start now because Putin’s next attack is imminent. The glow he acquired in Geneva will begin to wane and he will need another show of strength. The Biden administration may be embarrassed to react after making an effort to woo Putin in Geneva. But if the US fails to respond, Putin will be convinced that Biden is another American paper tiger. Words are easy, action is hard.