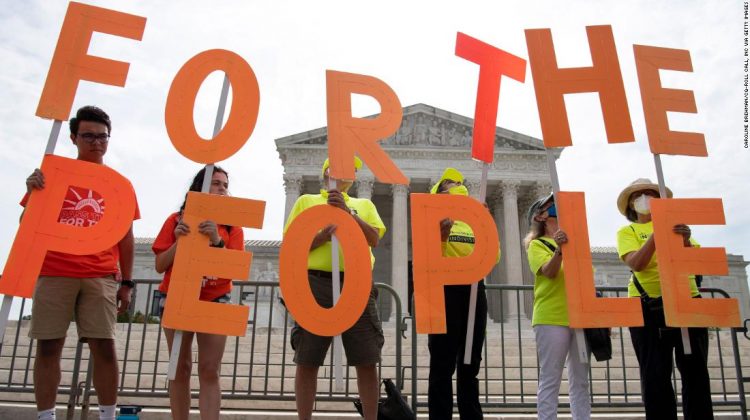 This year began with an assault on the US Capitol, carried out by people seeking to violently overturn the outcome of the 2020 election because their candidate — former President Donald Trump — lost. Fortunately, their efforts failed.

But now GOP-controlled state legislatures across the country have begun taking steps to curtail voting rights, many of which will adversely impact Democratic voters of color. According to the Brennan Center for Justice at New York University, as of May this year, legislators in 48 states have introduced 389 bills with restrictive voting provisions — placing new limits on absentee ballots, early voting days, and ballot drop-off boxes, among others.

In short, the anti-democracy haze that hung over the Capitol on January 6 clouds our state legislatures. But we cannot allow it to cloud our vision or dilute our principled commitment to a free and fair American democracy.

Politics may be the art of compromise, but leadership is always about knowing what is non-negotiable. Because people in high office are distanced from the harsh realities everyday people face, it can be easy for political leaders to lose perspective. The job of civil rights movements is to make clear what cannot be negotiated on the backs of everyday people. As people who’ve committed our whole lives to movements for justice and a multiracial democracy, we know that immediate federal protection against current assaults on voting rights is non-negotiable.

In the name of compromise, Sen. Joe Manchin of West Virginia recently suggested that the US Senate could pass scaled-back versions of the For the People Act and the John Lewis Voting Rights Act. Even so, he could not find a single Republican colleague to support his proposal. Instead, Republicans circled their wagons to use the filibuster Manchin has defended as a mechanism to block progress.
While many have noted how Manchin’s efforts expose Republican recalcitrance, we must also note how the details of his proposal revealed how dangerous compromise is when it comes to fundamental constitutional rights. For example, Manchin’s proposal would have required some form of voter ID nationwide, expanding to all states a suppression measure that proliferated after the election of our first Black president. His proposal also did not address several reforms included in pending legislation to guard against discrimination in our voting system and modernize our elections.
One centerpiece expansion omitted in Manchin’s proposal was the federal re-enfranchisement of formerly incarcerated people, a cornerstone equality provision of the For the People Act and a moral touchstone of democratic inclusion. Indeed, it appears that several of his modifications to the democracy protection voting bills could have had negative impact, particularly on African Americans and other people of color.
Capitulation to those who are willing to abandon democratic elections as long as it keeps them in power is an insult to the legacy of the late Rep. John Lewis. His blood was spilled on the Edmund Pettus Bridge to help people see the need for the Voting Rights Act in 1965. Now, more than half a century later, Manchin suggests this Congress should use his name to pass a version of the VRA with weaker pre-clearance standards that are, in fact, a step backward.
Lewis fought his whole political career against the political forces that tried to counter the gains of the civil rights movement. He was a primary shaper of the voting rights and democracy protections that have been consolidated in the For the People Act, and he fought for every one of those provisions because he knew — even before the newest surge of assaults on the foundations of our democracy — they were needed to protect our democracy.
We make a mistake when we reduce our history to sound bites or allow others to define the long civil rights movement that ushered in America’s Second Reconstruction as solely about the fundamental fight for Black people’s right to equal protection under the law. The struggle for voting rights and equal citizenship has never been a fight for the rights of Black people alone. The same people who don’t want Black people to vote also don’t want women, young people, poor and low-income people and other non-White people to vote.
They stay in power by targeting those who would vote against them, weakening our country by promoting racial and ethnic division — and then use their legislative power in state and federal legislatures to block living wages, healthcare and infrastructure investments that have the support of a majority of Americans. By compromising with their tactics, our political leaders forfeit their basic duty to serve the good of the whole.

This is a moment when We the People must draw a line in the sand. The right of every citizen over 18 years of age to participate in America’s democracy is non-negotiable. Democrats who may be inclined to rally behind a “compromise” should remember the bedrocks of the US Constitution they have sworn to uphold. They must rise to meet the moral crises of our time, forgo the filibuster and pass generationally significant protections to rescue the promise of democracy.