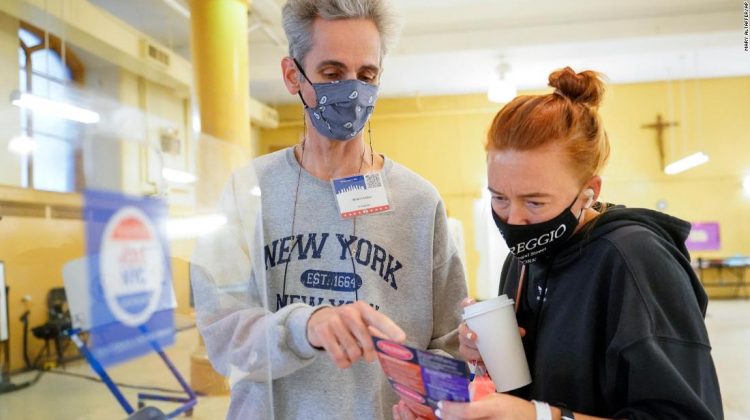 There’s no question that it’s a Democratic city — with a six-to-one Democratic registration advantage over Republicans, who are also outnumbered by independent voters. But that deep blue hue conceals a real diversity of opinion. And that’s what Tuesday’s Democratic primary for mayor showed.
It was a crowded field to succeed the unpopular incumbent Bill de Blasio, but first-round results showed that center-left candidates captured more than 67% of the Democratic primary vote — while candidates in the far-left lane attracted only about 30%. And this broadly parallels national splits within the Democratic Party.

But as former House Speaker Tip O’Neill famously said, “all politics is local.” So let’s dig a little deeper. The clear leader at this point, Eric Adams, is a former police officer and current Brooklyn Borough President, who promised to be tough on crime, rejecting calls to “defund the police.”

That message resonated because violent crime is on the rise in New York City as it is in many cities across the country. Last year, the city saw a 97% increase in shootings and a 45% rise in murder, and crime has continued to spike in 2021.

That’s much higher than when de Blasio took office — though well below the city’s murder peak in the early 1990s during the administration of Mayor David Dinkins.

And that may account for why Dinkins’ successor — Rudy Giuliani — had an approval rating of 55%, nearly 20 points above where de Blasio’s approval rating is today — 37%. And that was before the attacks of 9/11 put the spotlight on Giuliani. Giuliani was succeeded by Republican-turned-independent Mayor Mike Bloomberg, who served three terms and, after leaving office, enrolled as a Democrat and ran a brief, losing campaign for his party’s nomination for president.
Now de Blasio defenders will point to the fact that he was elected by landslides twice. But those were general elections with record low turnout — and that goes to the heart of how elections get skewed when the race is effectively decided in closed partisan primaries.
It’s no secret that the Trump years decimated Republicans as a political force in big cities — and they’re not coming back any time soon. The result is that cities like New York have gone from having competitive general elections to being one-party towns.
Consider the fact that de Blasio won the 2013 Democratic nomination with 40% of the vote. But only 22% of Democrats participated in that primary — and so, as the New York Times’ Sam Roberts pointed out — it meant that only 3% of all New Yorkers voted for de Blasio at that point.

Since then, 600,000 more New Yorkers have joined the Democratic Party And while turnout is up, still only roughly a quarter of Democrats participated in this week’s primary, with Adams currently having, in incomplete returns, fewer total votes than de Blasio did in his primary eight years ago.

Thankfully, this year, New York City embarked on an experiment with Ranked Choice Voting — a system used in cities like London — where voters ranked their top five choices. All we know now is who won the first round — and over the next few days or perhaps even weeks, thanks to the sclerotic Board of Elections, we’ll see who gets pushed past 50% as a result of the second choices of voters who backed losing candidates.

This at least ensures a more representative outcome. It’s a step in the right direction. But it’s not enough. In the general election, the odds are against Republican Curtis Sliwa because Democrats have such an overwhelming advantage in the city. It’s likely we’ll see a far smaller number of voters choosing the next mayor of America’s largest city than when we had a competitive open general election in 2001.

And here’s where America’s current debate about strengthening democracy through election reforms could come into play. To ensure a more robust and representative general election, New York City should embrace open primaries allowing all registered voters to vote — including the city’s 1 million independent voters, who are effectively disenfranchised in closed partisan primaries.

Ranked-choice voting could then allow the top three candidates to compete in a general election run-off, ensuring a real choice for all voters to focus on for the next five months, instead of having a mayor-elect selected by a quarter of the voters in one political party in a city of 8 million people.

If this sounds radical, it might surprise you that over 80% of America’s mayors are elected in non-partisan elections — including in the vast majority of the nation’s 30 biggest cities.

All this is a reminder that democracy is always a work in process, and we should not be afraid to experiment with ways to ensure that more voters can meaningfully participate in the process — because representative electorates lead to representative results.