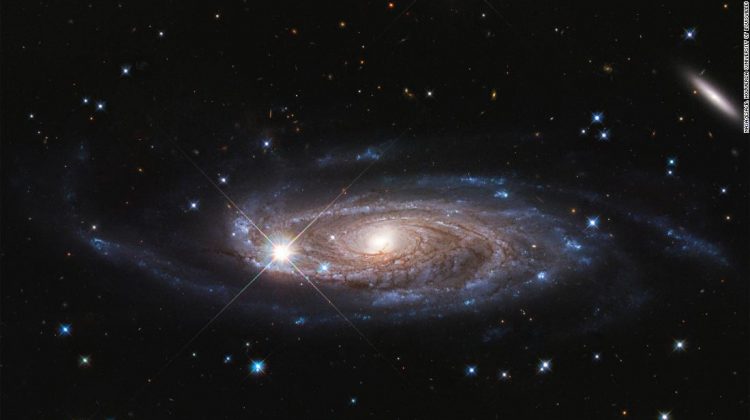 As an astronomer specializing in exoplanets (planets around other suns than ours), this is the question I spend my days exploring at the Carl Sagan Institute at Cornell. Where might there be life beyond Earth? And what signs should we be looking for that would help us find it?

We have already found thousands of exoplanets in our search for life in the cosmos, most of them using the “transit method” — seeing the way a star’s light dims slightly as a planet crosses through our line of sight. Determining which of those thousands of exoplanets host life is one of the most significant scientific adventures of all time.
There’s new technology on the horizon that will seek to answer this question. NASA’s James Webb Space Telescope will be the first telescope large enough to identify signs of life on worlds looking back at us, if it is out there. It is scheduled to launch later this year. Will it find evidence of real extraterrestrials?

And what about alien astronomers — if they exist? Could they have spotted us, using their own strategies?

In serendipitous timing, we’ve just identified the 1,715 stars that would have been in the right position in the last 5,000 years to see Earth dim our Sun. Those are the places from which someone could have spotted our Pale Blue Dot since the time human civilization bloomed. And these stars are all in our cosmic neighborhood, within about 300 light-years of Earth. And there are another 319 stars that will move into the right position over the next 5,000 years.
The fastest a human craft has ever traveled in space is 330,000 miles per hour — NASA’s Parker Solar Probe — but future spacecraft could go even faster. Even though humans would right now need thousands of years to reach those planets, we can already catch the light from these new worlds and start exploring them from Earth.
We have already spotted exoplanets in the Goldilocks Zone — the habitable zone — orbiting some of these stars that have been or will be in prime position to see Earth as we transit our own star. Such exoplanets circle their stars just at the right distance so that they are not too hot and not too cold. These could have liquid water on the surface, which we consider a requirement for life as we know it. If life were to evolve on such planets — like it did on ours — and if such life developed to the point of our current technology and was curious to look for other planets as well, then it could spot Earth because it blocks part of the Sun’s view from their sight.
Of course, life can be very unlike humans. Perhaps extraterrestrials could resemble extremophiles that can survive in environments that are dramatically inhospitable to us. But all life we know of so far needs water.
We’ve been inadvertently sending greetings to other worlds for decades already, ever since radio waves first swept away from Earth out into the cosmos. By now, they’ve already swept over some of the places where alien astronomers could perhaps spot us, out to a distance of over 100 light-years so far. And they will keep traveling ever further outward.
But because we can spot other planets transit does not mean their potential inhabitants are in a position to spot us: The discovery of three potentially habitable planets around the star Trappist-1 caused great excitement among astronomers in 2017. They’re only 40 light-years away. But while we can see them already, they will only start to see the Earth block out the Sun’s light in just over 1,600 years.
The Goldilocks planet Ross 128b is even closer, at only eleven light-years away. That’s next door in cosmic terms. Any inhabitants could have seen Earth darken the light of our Sun for more than 2000 years, but it went out of prime viewing position about 900 years ago. Potential inhabitants might not have guessed there was intelligent life on this planet if they were able to spot us only until 1121 A.D. — the Crusaders were in Jerusalem, and the Byzantine emperor was fighting in Asia Minor.
With Earth in prime view of so many stars, might there be alien astronomers who’ve discovered us already? Here at the Carl Sagan Institute, we are developing a forensic tool kit to find life in the cosmos — even if it might be different from us — such as our color catalog of life. I like to imagine astronomers like me on other worlds coming up with their own ways to identify me as alive — defining if something is alive is actually quite complicated if this life is light-years away from you. Most of the kinds of life we can imagine finding will likely only be identified by their effect on the atmosphere of their planet — such as the way that trees inhaling carbon dioxide and exhaling oxygen affect our atmosphere.
According to our research, the two thousand stars we’ve identified generally spend more than 1,000 years in a position to see Earth transit our Sun. That gives anyone searching the cosmos an extended timeline in which to notice life in our world. I wonder whether they have already every time I look up at the night sky. What would they be thinking about us?

Will the James Webb telescope find evidence of real extraterrestrials? I can’t wait to find out.