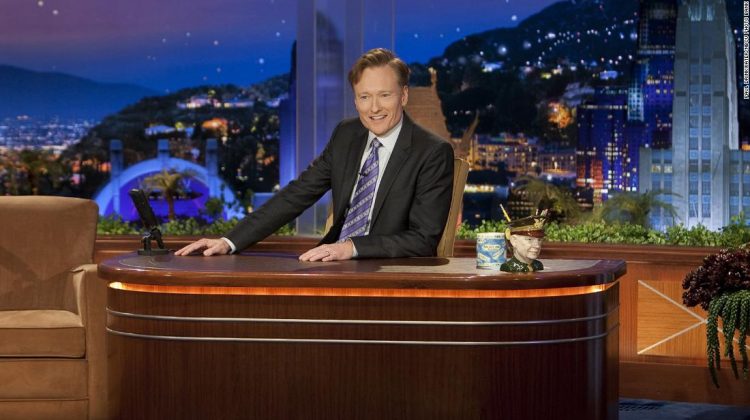 He does have something new planned for TV — a series on WarnerMedia’s HBO Max that is being labeled a variety-style show. (WarnerMedia is CNN’s parent company.) Whatever it is, Conan will surely be funny; because, when all the Sturm und Drang of his late-night career is put to one side (and there was surely a lot of that), what stands out is how original and truly off-the wall his comedic style — and mind — has been.

If you got him, that is. I have had numerous experiences with people who asked me why Conan was such a big deal because they found him odd and off-putting, not funny in the least. My response always acknowledged that humor is personal, and few comedians have been universally celebrated as hilarious; but that I could only tell them that I personally found much of his show brilliantly inventive and funny, and that I had been in the presence of many people who considered Conan a rare and perhaps unmatched comic genius.

I had seen some of those people line up in the heat of a Manhattan summer to get inside the Beacon Theatre to see one of Conan’s anniversary shows while he worked at NBC’s “Late Night.” On one occasion, I had seen an especially enthused guy wearing a T-shirt that read: “I took Conan for my Confirmation name!”

In Eugene, Oregon, where Conan did the first show on his national tour while on his hiatus from TV, I watched a screaming horde of fans, still soaked from standing for hours outside in the rain, crawl over each other to try to touch him when he walked through the aisles of the arena playing his guitar. And then I saw many of those same fans swarm the concession stands to buy “Team Coco” merchandise — hats, T-shirts, posters.

For a generation of American TV viewers, those who went to college in the late 90’s and through the first decade of the new century, Conan was their guy. Nobody else was close.

Given where he came from, this was an amazing achievement, one that few or maybe no other TV star has ever matched. It’s a now familiar tale, but Conan’s success in late night is not unlike an MVP ballplayer having started out as a kid stepping out of the stands at Fenway Park and taking Ted Williams’s spot in the Red Sox batting order.

That was the comparison Conan himself made to me about his unlikely ascension to the job hosting the NBC show David Letterman had created. (He suggested the ballplayer would have worn a uniform with the number “17 and a half” and had a name like “Chip Whitley.”)

A respected young comedy writer for “Saturday Night Live” and “The Simpsons,” Conan took over “Late Night” in 1993 with no real performing experience at all. He did a now-famous audition show for NBC, which showed him to be clever and likeable, but painfully awkward.
His early months as host contained a steady stream of wildly absurd sketches and flashes of real wit, but an equal portion of moments where the show looked like something produced in a nice Irish kid’s rec room. Those moments so distressed NBC that the network offered Conan a 13-week contract at one point, stringing him along with assurances of a new deal that never came. Then, as I wrote about in The New York Times, NBC said it was only going to keep him on the air week-to-week.
Conan came back from that low point spectacularly, giving NBC 16 years of a hit late-night show.
As bitter as that initial fight for survival was, it could never, of course, match the turn of events that resulted in Conan losing his shot at hosting “The Tonight Show” in 2010, after just seven months. NBC’s plan to install his predecessor Jay Leno in a 10 p.m. show failed, so the network proposed moving Leno to O’Brien’s slot at 11:35 p.m. O’Brien refused to be bumped to 12:05 a.m. and decided to move on.

No assessment of Conan’s career is ever going to leave out the network battles he was compelled to engage in to keep his place in late night alive. But in the end, they don’t really matter.

What matters in the careers of the individuals who put themselves front and center four or five nights a week as hosts of the American phenomenon known as a late-night show is whether or not they made significant contributions to the genre; whether their best material stands up over time as fresh, creative, original comedy.

Conan has said that he believes his brand of comedy would be found in a Venn diagram where smart meets silly. I think it might be called sophisticated silliness.

The levels of comic absurdity Conan reached from his three different late-night shows are like nothing else ever created for television.

That’s what really matters about his career as a late-night star. He was always ambitious, always trying to lift his show and the late-night genre to a more creative, imaginative, funnier level. He leaves behind no doubt: He accomplished all of that.