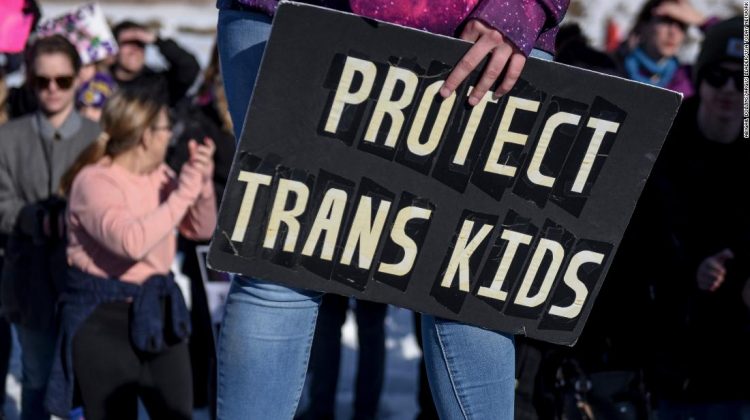 One of us is a physician-scientist and the other is a historian of medicine. We’ve both been watching as conservatives claim their legislative attacks on transgender people are rooted in science. Because we lack explicit federal civil rights protections for transgender people, a problem The Equality Act would remedy, Republicans have been able to launch a range of attacks on the civil rights of transgender people, each time using “science” as their justification. Republican Gov. Ron DeSantis, when signing a piece of anti-trans legislation into law earlier this month, claimed “We are going to go based off biology — not based on ideology.”

But here’s the thing — they’re not. In fact, attacks on trans people are also attacks on science itself.

First of all, transgender people are not “denying science” by virtue of existing. On the contrary, the medical and scientific consensus is that being trans and transitioning are healthy natural manifestations of human diversity — and transgender people have a lot of long-ignored expertise to offer the sciences.
Research confirms a strong biological basis for gender identity. Twin studies have shown that transgender identity, rooted in the brain, has a strong genetic basis, and sophisticated gene sequencing has found a range of putative genes involved in gender identity development — mostly those involved in how the body reacts to hormones such as estrogen.

Though some conservatives have a strange obsession with focusing on other elements of biology (i.e., genitals and chromosomes), it doesn’t make scientific or medical sense to give these unconscious parts of our bodies primacy over our conscious brains, where gender identity resides. As any trans person could tell you, we don’t need these biological data to justify our humanity, but they do empirically defang anti-trans ideology.

As for the legislation itself, none of it holds up in the face of actual research. Many will remember the “bathroom bill” saga that began in North Carolina in 2016, in which Republicans argued that we needed to ban transgender people from bathrooms that match their gender identity because otherwise there would be a rise in sexual assaults. However, research has shown that, in reality, trans-inclusive bathroom policies are associated with lower rates of sexual assault victimization against transgender people and no increase in sexual assault victimization among the general population.

More recently, conservative legislators have moved on from “bathroom bills” to sports-related bills targeting transgender people. These bills, dozens of which are currently being considered around the country, seek to ban transgender students from playing in sports teams that match their gender identities.

The false premise behind them is that if transgender girls are allowed to compete on girls’ sports teams, then cisgender girls (whose gender identity aligns with their sex assigned at birth) won’t be able to win. Experience in California shows that this is not true. In 2013, the state passed a law that protects the rights of transgender students to participate in sports teams that match their gender identity. Los Angeles teacher and retired basketball coach Larry Strauss wrote that he has seen and heard of no problems with implementing the policy, and trans athletes are not dominating girls’ sports leagues. Similarly, when The Associated Press asked Republican legislators who introduced these bills to name a single transgender athlete in their state, most could not. This just doesn’t seem to be a real issue.
While Republican state legislators and local officials often invoke a case in Connecticut where the families of cisgender girls filed a lawsuit to block transgender girls’ participation in girls’ sports in the state, they conspicuously leave out the fact that one of the three cisgender girls involved in the lawsuit beat the transgender girl named in the lawsuit in the state championship just a few days after the lawsuit was filed.
Some of the same conservative politicians also like to point out that cisgender men on average do better than cisgender women in many sporting events. But they refuse to acknowledge that transgender women are not cisgender men, and that they face many barriers to success in sport that cisgender men do not. Unlike cisgender men, transgender women face dramatically elevated rates of bullying, harassment and subsequent anxiety and depression — all of which make it difficult to train and succeed in athletics from a young age. In short, these anti-sports bills don’t just deny scientific and social reality, they pretend to reverse it.
The other type of legislation targeting transgender people seeks to prohibit, and in some cases, criminalize the provision of gender-affirming health care (medical and surgical interventions that are the standard of care for treating transgender youth). These bills themselves contain many scientific falsehoods. For instance, Alabama’s HB1 asserted that gender-affirming health care for transgender youth results in higher rates of mental illness (the opposite is true).
The bill also claimed that “studies have shown” that a “substantial majority” of transgender adolescents will grow up to be cisgender “when supported through their natural puberty” — in other words, if not offered gender-affirming medical interventions. This false assertion has been repeatedly debunked.
Because all existing research has shown that gender-affirming medical care for transgender youth is linked to improved mental health outcomes, all major medical organizations oppose these bills. The parents of transgender youth highlight just how dangerous these bills are. As one parent put it, passage “would mean death for my child.” Legislation taking gender-affirming health care away from trans youth is anti-kids and anti-science.
Proponents of bills like these have also tried to argue that transgender identity is something “new” or a “trend” driven by social media. Setting aside the absurdity of imagining that being cisgender is so incredibly fragile, the facts of history are being erased with assertions like these. Trans children have lived openly as trans for at least a century in the United States and have accessed transition-related health care as long as it has existed.
The most pessimistic interpretation of these developments is that these state politicians actually know that their proposed bills targeting transgender people are anti-science. One common theory is that they’re pushing the bills regardless of what research says because talking about gender stirs voters’ emotions, and it’s a powerful way for politicians and political parties to raise money.

From our perspectives as researchers, one of the most insidious effects of their attacks is that they have slowed scientific and medical change for the transgender community. Transgender people have long critiqued the medical and scientific communities for failing to support them appropriately. Transgender people have also been instrumental in critically working with, educating, and in many cases driving the medical field to become competent, despite great risk and stigma.

Trans academics have been helping the scientific community understand what the priorities in this field should be in order to support trans people instead of pathologizing them: improving access to care, addressing the history of “gate keeping” of gender-affirming medical care, reckoning with compounding race and class barriers to accessing health care, and addressing systemic transphobia in medicine.
Similar to the community-based ACT UP movement of the 1980s that critiqued the lethally slow-moving, profit-driven and state-neglect of the medical industry around HIV/AIDS, members of the transgender community have been vital to pushing care toward gender-affirming and health care justice models based on bodily and community autonomy. The platform of the first transgender liberation activists in the 1970s, who pushed for health care without the threat of institutionalization and conversion therapy, remains largely unfulfilled.

Instead of pursuing these priorities in concert with trans experts, physicians and researchers now have been pushed to focus on fighting these unscientific attacks on transgender people. As a result, we see too many trans people being shut out of the conversations regarding their own medical care and research: anti-trans legislation paints them as science-deniers, despite the fact that they have been and remain leaders in the field who have helped author today’s gender-affirming medical models.

Don’t let manipulative state legislators misrepresent science and fearmonger you into giving them money. At the very least, don’t let them continue with their false pseudoscientific assertions. Pressure them to do their jobs and introduce real evidence-based legislation — like the Equality Act — that will improve lives.