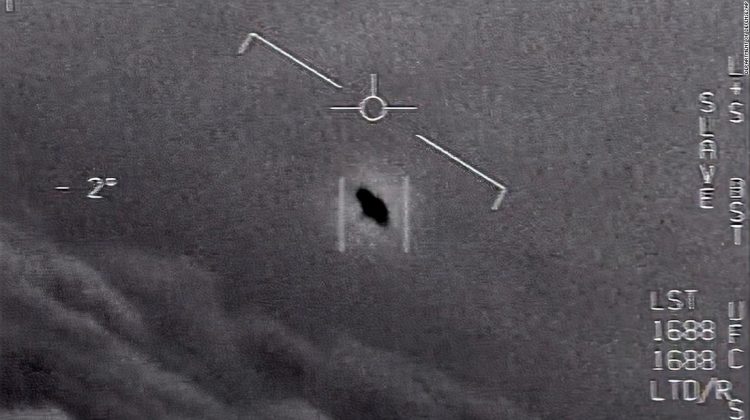 A Pentagon report expected later this month, detailing what the US military knows about UFOs (and possibly alien visitation), may shed some light on the situation. News of the forthcoming report has been met with excitement and anticipation, although officials briefed on the findings have said that the report may muddy the conversation with its ambiguous findings. And the expectation of multiple redactions, nominally to avoid revealing the US military’s capabilities will surely feed the suspicions of conspiracy theorists.
On Wednesday, weeks ahead of the anticipated report, members of the House Intelligence Committee received a classified briefing on the matter. What classified information will be revealed to the committee, we may not find out. But this much is clear: The government is taking the sighting of UFOs very seriously.
In any conversation about this topic, it is imperative to be clear about what the term UFO means. For many, UFOs conjure up imagery of flying saucers and little green men (LGM). But, of course, that’s not accurate. UFOs literally means “Unidentified Flying Objects,” or simply something in the air that is not explained. For many, however, the connection between UFOs and LGM is just too strong, so a new phrase has been coined: Unidentified Aerial Phenomena, or UAPs, which may help sever the connection.

If we break the mental link between UFOs and extraterrestrial life, then the idea of a UFO sighting seems more plausible. Sure, it could be a saucer carrying LGM — but it could also be a military craft or, most sadly for alien enthusiasts, an even more prosaic space object like the planet Venus, weather balloons, airplanes flying in formation or a myriad of ordinary phenomena — often combined together.

And one can’t rule out the possibility of outright hoaxes. Of course, if ordinary phenomena are identified as the cause of the sighting, the object is technically no longer a UFO.

Although people who are convinced that alien visitation is real point to much older stories, one of the first modern examples of what we would call UFOs comes from reports by Allied fighter pilots returning from bombing runs over occupied Europe. They told of glowing lights that followed their planes. The pilots called these lights “foo fighters,” and they believed them to be some sort of Nazi weapon.
The real progenitor report of UFOs in mainstream culture occurred on June 24, 1947, when pilot Kenneth Arnold was flying near Mount Rainier in Washington State. He reported nine illuminated objects, thin and shaped sort of like crescent rolls, and they moved in a line, like a kite’s tale. He estimated their speed as around 1,700 miles per hour, which was incredibly fast for the day. The press took a heavy interest in the story of these mysterious flying objects.
The term “flying saucers” came to our language accidentally. On June 26, the Chicago Sun ran a headline “Supersonic Flying Saucers Sighted by Idaho Pilot.” However, the story told a different tale. In an interview Arnold told reporters that the objects moved “like a saucer would if you skipped it across the water.”But the headline told made the term “flying saucer” ubiquitous. Since then, many people have reported seeing saucer-shaped UFOs. The power of suggestion is apparently real.
Another UFO tale from the frenzy of the summer of 1947 is the reports of a crashed flying saucer at Roswell, New Mexico. In July, the Roswell Daily Record headlined the capture of a flying saucer, but by the next day, the new reporting revealed that it had in fact been a weather balloon.
The story lay dormant until in 1979, when the National Enquirer ran a piece in which an intelligence officer working at Roswell in 1947 claimed that the object was a flying saucer. Documentaries followed, as did a 1980 book called “The Roswell Incident.” The public imagination had been captured.

But connections with flying saucers aside, there is a real question as to what is going on when a strange object is observed in flying through the air. Or maybe the better question is: “Is anything going on?” That’s what many people hope the forthcoming report from the Pentagon will tell us.

The US military has long taken reports of UFOs seriously. After all, whether these objects, which many have reported to move far more quickly than even the most advanced weaponry in the US arsenal, could be a military threat. It doesn’t matter if the objects are of extraterrestrial origin or some sort of advanced technology from another country. It would be grossly irresponsible if the military didn’t investigate.

And it has. For example, from 1947 to 1969, an Air Force effort called Project Blue Book investigated 12,618 reports of UFOs and found most of them to simply be ordinary phenomena. When it shut down, there were still 701 UFO reports that had not been explained and none of the explanations of the understood reports involved LGM.
More recently, a new effort to study UFOs was championed by then-Sen. Harry Reid. This effort, entitled Advanced Aerospace Threat Identification Program or AATIP, operated from 2007 to 2012 and investigated UFO reports by US military personnel. The explanation for shutting it down was simply that the funding was better spent on other programs. In 2020 a similar program was started, called the Unidentified Aerial Phenomena Task Force.
Luis Elizondo, former head of AATIP and sometimes called a real-world Fox Mulder, decried what he considered to be the project’s premature termination. He continues to urge the administration and the public to focus on what he considers to be a matter of crucial importance.
So, what do I think about UFOs and LGM? As a scientist, I think that extraterrestrial life is common in the universe. After all, astronomers have discovered thousands of exoplanets and chemistry is chemistry. Given the right conditions, life will arise from the same chemical reactions here we see here on Earth; and other chemical combinations are also possible. Indeed, it boggles my mind to think that life has not evolved elsewhere. I think it’s likely that intelligent extraterrestrial life is relatively rare.
Here on Earth, millions of species have evolved since life began, and only humanity has evolved the intelligence and abilities to develop a technologically advanced civilization. And I think that most (probably all) UFOs are not observations of extraterrestrial craft. Difficulties of interstellar travel aside, it seems to me to be inconceivable that an advanced species would find us interesting enough to visit, but not interesting enough to contact. And, if they wanted to avoid contact, they’re not being very stealthy about it.
But I’m open to being proven wrong. Personally, I very much want society to continue to fund programs that try to look for extraterrestrial life, especially SETI, the Search for Extraterrestrial Intelligence, which looks for radio transmissions from advanced civilizations around distant stars. I also want to get to the bottom of UFO phenomena. If it’s advanced weapons from other countries, we should know. And nobody would be more excited than I would be to find out that we’re not alone in the cosmos and we’re being visited.
As Fox Mulder said, “I want to believe.” But first, we need incontrovertible proof.