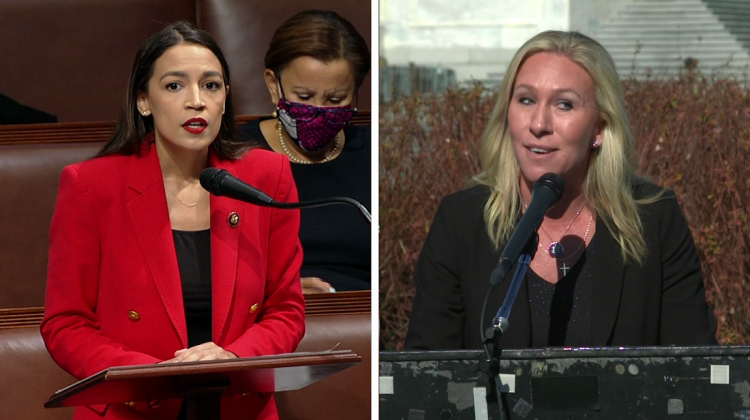 And Greene didn’t’ disappoint those Trump fans by failing to serve up the rancid red meat they clearly crave. Furthering “The Big Lie,” Greene said to the adoring crowd: “Let me ask you a question — who is president?” In response the crowd yelled back: “Trump! Trump! Trump!” She called for infectious disease expert Dr. Anthony Fauci — a man seen as a villain to many in Trump world — to be fired, eliciting roars of approval.
Then Greene went after one of Trump’s favorite targets, New York Democratic Rep. Alexandria Ocasio-Cortez (AOC). In 2019, Trump said the progressive congresswoman should “go back” to the country she came from — along with three other US-born Democratic female representatives of color. (AOC was born in the Bronx.)
Taking a page from Trump’s bigoted playbook, Greene told the Ohio audience about AOC: She’s “the little communist from New York City,” adding, “She’s not an American. She really doesn’t embrace our American ways.” In response, the crowd booed AOC with someone yelling, “Lock her up,” to which Green responded, “Yeah, Lock her up, too. That’s a good idea.”
Greene had to be feeling pretty good about her “performance.” At least until later that night, when AOC tweeted her response to a video clip of Greene calling her “a little communist.” Did AOC lash out with righteous rage against the smears and lies Greene had spewed? Nope, instead AOC responded to Greene’s smears and words with seven words: “First of all, I’m taller than her.
And boom — that tweet went wildly viral. By early Sunday afternoon it had over 470,000 likes and more than 47,000 retweets. For perspective, Greene’s “Thank you for having me, President Trump!” rally tweet, which embedded a video clip of Trump speaking, had about 9,400 likes. Ouch, that had to hurt Greene

AOC gave us a master class in the use of comedy being an effective tool in crushing the lies and smears of some in Trump world. Instead of engaging angrily — as Greene likely hoped for–AOC’s seven-word response caused far more people to laugh at Greene (based on Twitter likes) than those who cheered the attack lines at the Trump rally.

If Greene has any questions about how bad the witty putdown was, she can simply ask her favorite insurrection inciter, Trump. He fully grasped the power of comedy in the world of politics. Trump loved to mock and malign people with demeaning nicknames so that others would laugh at that person. Trump understood that helped him and hurt the person he made the butt of his joke.
It’s also why Trump was so often angrily triggered when shows like Saturday Night Live or late-night comedians made him a punchline. Trump even called for SNL to be canceled in the closing days of the 2016 campaign for mocking him and as president in early 2019, he was so incensed by “Saturday Night Live” comedy at his expense he tweeted: “Should Federal Election Commission and/or FCC look into this?” (Adding to Trump’s outrage is that he’s cut from the same cloth as authoritarian leaders, the so-called “strongmen” who want to be feared — not laughed at.)
Of course, jokes alone of course are not the answer to people like Greene when they spew bigotry and dangerous conspiracy theories. There’s absolutely nothing funny to be said about her comments in May comparing mask mandates with the Holocaust. Nor would it have been enough only to tell jokes ridiculing Greene in April for her plan to start the “America First” caucus in Congress to celebrate “Anglo-Saxon political traditions.” Sure it was funny when Stephen Colbert raised the issue for his late-night show audience, doing an impression of an invader from centuries ago and holding up a roasted chicken on a skewer while playfully agreeing that, “Anglo-Saxon culture demands we go back to the traditions established by a tribe of Germanic invaders who settled with the Britons in an attempt to flee the Norse … by Odin’s beard!!”
But it was important that elected officials — including a few Republicans — slammed Greene’s plan to create a White nationalist caucus and that she later faced a censure resolution in the House for her mask remarks. After the firestorms, she canceled plans for the caucus and apologized for her “offensive” comments about the Nazi treatment of Jews.

Can facts and comedy be the kryptonite to Trump and Greene’s lies? Probably not when it comes to their supporters. But it can be effective to reach the rest of America. And since there are far more of us than them, let the facts and jokes fly. It’s time to turn Greene into the human punchline that she deserves to be.