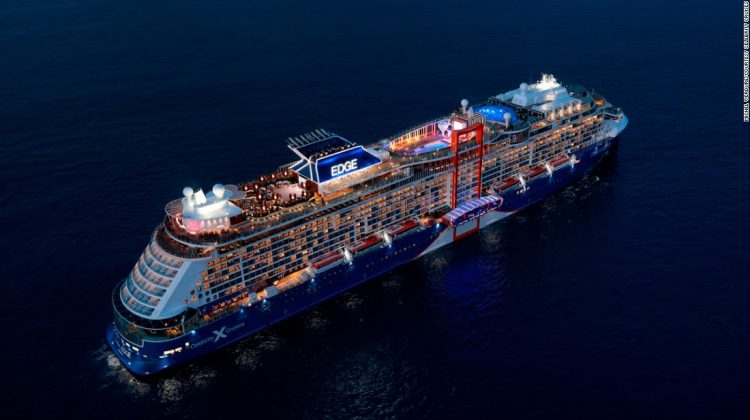 Gulf of Mexico (CNN) — The usual embarkation day boarding rush didn’t happen. There are no lines at the buffet. The casino’s slot machines are on, but few passengers are playing them. During dinner service, the bottom floor of a multistory restaurant sits empty, save for one table reserved for media. There are plenty of lounge chairs available by the pool.

These are just a few of the travel scenes playing out onboard the Celebrity Edge.
The first cruise ship to sail out of a United States port in more than 15 months, the vessel departed from Port Everglades in Fort Lauderdale, Florida, just after 6 p.m. Saturday, embarking on a seven-night voyage with ports of call in Mexico and the Bahamas.
CNN is onboard the cruise to give you a passenger’s POV of the experience.

Though this journey symbolizes the return of an industry that is among the hardest hit by the pandemic, it also offers insights into how far we are from a full return to “normal.”

“This is a lot less people,” said passenger Jen Brumfield. “The theater — it’s so easy to get a seat right now. In a full cruise, you might wait in line.”

Jen and her husband, Mike Brumfield of Creston, Ohio, knew they wanted to celebrate their 30th wedding anniversary on a cruise ship. But they wanted to be able to enjoy it without having to wear masks.

The Celebrity Edge was docked at Port Everglades in Fort Lauderdale, Florida.

This is their first time sailing with Celebrity Cruises, but they booked the trip because the Edge is the first ship to depart from a US port.

Mike Brumfield noted the food seems to be a cut above typical cruise meals — perhaps, he speculated, because the cruise line wants to impress members of the media on the ship.

Where are the children?

As the parents of eight children — none of whom accompanied them on this anniversary trip — they say it’s particularly noticeable how few children are on board.

That’s partly because the Celebrity brand caters more to an adult demographic than family-oriented brands like its sister cruise line, Royal Caribbean. But in this case, it also has to do with the stringent new cruise rules from the Centers for Disease Control and Prevention.

To gain approval to set sail, Celebrity needed to ensure at least 95% of the people onboard the Edge would be vaccinated. At present, children 11 and younger are not eligible for Covid-19 vaccines in the US.

The ship, which normally can just over 2,900 passengers, is barely at 40% capacity. With 100% of the crew and all passengers of eligible age vaccinated, the Edge is currently sailing through the Gulf of Mexico, making its way to its first port of call, Costa Maya, Mexico.

Some passengers on this voyage, such as Susan Staffa, were on the Edge’s final sailing in March 2020. At the time, other cruise ships were reporting rising Covid-19 infections, leaving passengers stranded on board, unable to disembark.

“It was pretty scary,” recalled Staffa. “People were very apprehensive on that cruise. A lot of people had canceled, so the cruise was not as full as it normally would have been. The feeling today is hoping that they have it figured out.”

Trust in the safety protocols

Passengers on the current Celebrity Edge cruise are demonstrating a level of trust in the protocols.

“I would not be sailing if there were not a requirement for a very, very high number of vaccinated passengers. I would have stayed home,” said Tina Carter.

Loyal cruisers such as Carter know this is not going to be a typical pre-Covid experience.

A sign labeled “Healthy at Sea,” which passengers saw when they boarded, read: “Notice: Proof of vaccination will be recorded and may be reviewed for signs of fraud.”

“We feel very safe being here today,” said Diana Middleton of Washington D.C., with her husband, Mark. “It was a no brainer.”

Many of the differences were minor.

The traditional first-day muster drill, during which passengers practice for an emergency, is now conducted through a series of video safety briefings on the cruise app. Passengers can check into their muster stations any time before 5 p.m., allowing them to avoid the usual crowd of people who would have previously gathered shoulder to shoulder in life vests.

The beloved cruise buffet is now staffed by servers, meaning guests are no longer allowed to lob heaps of scrambled eggs onto their own plates.

Hand sanitizer stations are placed outside every elevator and restaurant.

The experience off the ship will be vastly different for passengers. Before sailing, passengers were informed by email that they would only be permitted to go on curated excursions managed by the Celebrity at ports of call. They will not be able to participate in third-party excursions as in the past.

Masks on land but not at sea

“I’m really excited just to be back cruising. Nothing like it,” said Tina Carter of Washington, D.C.

In Mexico and the Bahamas, where vaccination rates are still low, visitors will need to keep masks on both indoors and outdoors. Temperature checks will be required at those ports of call, and staff leading the curated tours have been certified by state and local authorities.

Overall though, the cruising experience is essentially unchanged.

“What’s really remarkable for this first sailing from a US home port is really how much it looks like life before the pandemic on a cruise ship,” said Chris Gray Faust, CruiseCritic.com’s managing editor, on board the Edge.

High emotions on the high seas

With almost as many staff members as passengers on this sailing of the Celebrity Edge, a prominent part of the cruise experience is not just the excitement of guests, but the conversations with emotional members of the crew, who are back at work for the first time in more than 15 months.

On the night of departure, Yalcin Yuca, assistant maître d at the Eden restaurant, excitedly told guests about the five-course tasting menu: “a culinary journey transporting you through Eden itself.” Then upon being asked what it was like being back at work, his eyes welled up.

“I think it’s good that Celebrity has got their folks back to working and ready to sail,” said Cynthia Mitchell of Hope, Kansas, wearing matching “Straight Outta Vaccination” shirts with her husband, James.

“This ship is my ship. My family’s ship. Her family’s ship,” he said, pointing to another crew member, explaining that all the money they earn on the ship is what feeds their families at home.

During the CDC’s no-sail order, Yalcin returned to his home country of Turkey. In Istanbul, he learned new computer skills, continued hospitality training and even had time to paint.

At almost every meal or entertainment experience, staff have shared with CNN what other work they did during the more than 15 months of not working on the ship. One server at the breakfast buffet said she grew and sold vegetables back home in the Philippines. A drummer in one of the ship’s entertainment acts drove an ambulance in London.

“It kind of felt like we were back to almost normal,” says Mia Brashier, one of the cruise’s musicians, when asked about her first day back on the ship.

Brashier and her partner, Dan Nixon, started performing together on cruises exactly four years ago. On Sunday, their band, True Colours, played to fewer people than usual on the Grand Plaza of the ship, with a couple dozen guests gathered at the Martini Bar, and a few people dancing to their songs.

While steering the massive ship through the Florida Straits from the wheelhouse of the Edge, Captain Kate McCue told CNN the return to sea has been very emotional.

“It really hit me when we dropped our lines, when we came off the pier with our guests on board, because that seems so natural that it made the last 15 months a bit of a blur,” she said.

McCue, the first — and still only — American female cruise ship captain, spent more than six months of the pandemic on board the Edge starting in March 2020 with hundreds of her crew members who were trying to return home. Several competing cruise lines — forced into the same situation — did the same. A kinship among them evolved.

“I looked out the window, and we were surrounded by other ships,” recalled McCue. “And it gave me a sense that we’re not alone because we weren’t in this alone. There were other ships that were going through the exact same situation.”

What’s next for cruising

While the Edge is the first ship to get CDC approval to sail from US ports, Royal Caribbean Group CEO Richard Fain, who is on this voyage, said it’s important to get things right, rather than move too fast.

This journey is the first glimmer of hope in what Fain described as a “horrible 15 months” filled with huge losses.

“And I think when we’re looking at this as a long-term business, we’re not looking for how this summer is going to do or how this coming fall is going to do or even the beginning of next year. We’re really looking longer-term … and the evidence is that there is a pent-up demand. The evidence is people want to get out of their homes, people want to go places and want to do things. And so I think the future is very bright.”

Still, Fain realizes the virus will not be eliminated. For instance, two fully vaccinated passengers on the Celebrity Millennium, departing from the Bahamas earlier this month, tested positive for Covid-19.

Fain takes that as a sign the protocols are working, given that the guests were quickly isolated and staff immediately carried out contact tracing procedures.

“This is why we think that it is viable to have the objective of being safer than on land because we control the entire environment, and we can make sure that so many people are vaccinated,” said Fain.

“One thing we’ve seen about this virus is, it’s unpredictable and if something changes, we will change to accommodate it. But at this point, what we’re seeing is we’re able to control our environment to keep the virus off the vessel. And for those few that get through that barrier, we’re able to take care of it without disrupting everybody’s vacation.”

Fain’s hope is that the future of the industry goes as it has so far on this voyage: calm seas and smooth sailing.