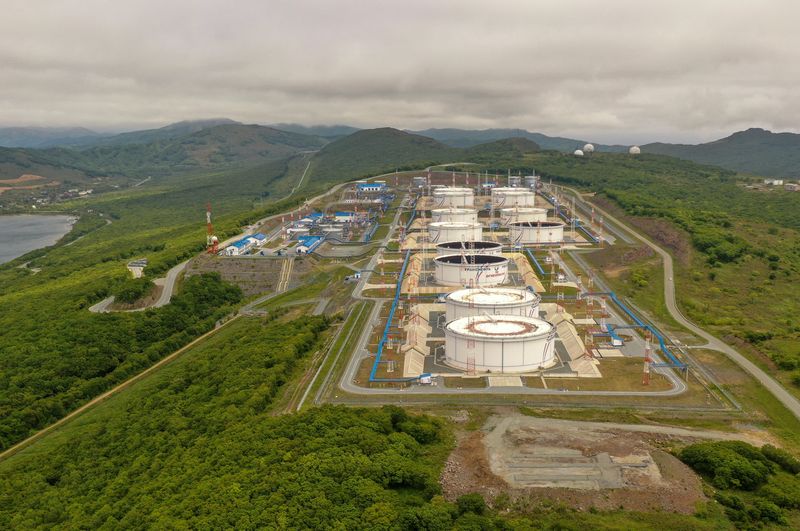 © Reuters. An aerial view shows oil tanks of Transneft oil pipeline operator at the crude oil terminal Kozmino on the shore of Nakhodka Bay near the port city of Nakhodka, Russia June 13, 2022. Picture taken with a drone. REUTERS/Tatiana Meel

SINGAPORE (Reuters) – Oil prices wobbled early on Monday as investors refocused on tight supplies, though sentiment was still fragile after 6% slump in the previous session amid concerns about slowing global economic growth and fuel demand.

U.S. West Texas Intermediate crude was at $109.55 a barrel, down 1 cent after rising more than $1 in early morning deals. Front-month prices dropped 9.2% last week, the first decline in eight weeks.

“For the moment, disruptions to oil supply are taking a back seat to concerns of weaker demand,” ANZ analysts said in a note.

“The fundamental picture remains one of tightness amid the ongoing slowdown in Russian output.”

Russian oil remains out of reach to most countries due to Western sanctions. The impact has been partly mitigated by the release of strategic petroleum reserves, led by the United States, and a ramp-up of production from OPEC+ although that is thinning the world’s buffer against further supply disruption.

“If Washington sticks to its current pace, the U.S. strategic reserve will hit a 40-year low of 358 million barrels by October,” ANZ said.

The oil and gas rig count, an early indicator of future output, rose seven to 740 in the week to June 17, its highest since March 2020, energy services firm Baker Hughes Co said in its closely followed report on Friday.

The Libyan oil minister Mohamed Oun told Reuters on Monday that the country’s total production is at about 700,000 barrels per day (bpd). Last week, Libya’s oil output was at 100,000-150,000 bpd, a spokesman for the oil ministry had said.

The country’s gasoline exports in May fell 45.5% from a year earlier and diesel exports plunged 92.7% despite stalling domestic demand, as companies ran short of export quotas, Chinese customs data showed on Saturday.