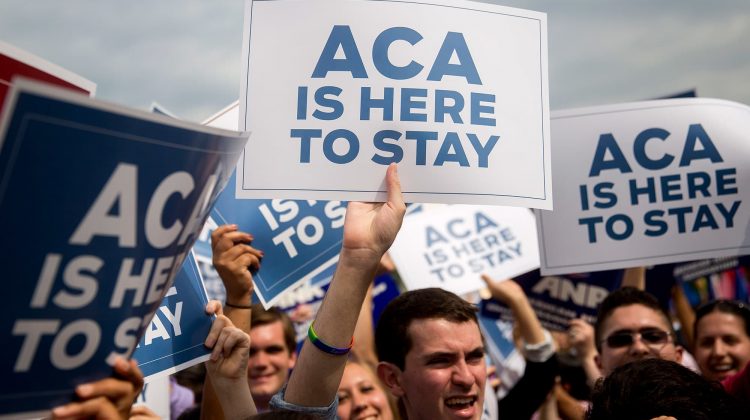 Demonstrators in support of U.S. President Barack Obama’s health-care law, the Affordable Care Act (ACA), hold up ‘ACA is Here to Stay’ signs after the U.S. Supreme Court ruled 6-3 to save Obamacare tax subsidies outside the Supreme Court in Washington, D.C. June 25, 2015.

The Supreme Court on Thursday ruled against Texas and other Republican-led states seeking to strike down Obamacare in the law’s latest test before the nation’s highest court.

The top court voted 7-2 to reverse an appeals court ruling that had struck down the law’s individual mandate provision.

Justice Stephen Breyer, who authored the opinion of the court, said that Texas and the other states that challenged the law failed to show that they were harmed by it. In legal terms, the states failed to demonstrate that they had standing.

“Neither the individual nor the state plaintiffs have shown that the injury they will suffer or have suffered is ‘fairly traceable’ to the ‘allegedly unlawful conduct’ of which they complain,” Breyer wrote.

The decision is a major victory for the legislation, which former President Barack Obama signed in 2010. The law has since become a crucial element of the nation’s health-care system, responsible for the coverage of tens of millions of Americans.

The decision marks the third time that Obamacare, also known as the Affordable Care Act, has survived a challenge before the Supreme Court. Defenders of the law worried that the panel, which now has a 6-3 majority of Republican-appointed justices, would scrap the legislation, which has long been criticized by conservatives.

Democrats had warned during Barrett’s confirmation hearings that she was likely to cast a vote in the case that would jeopardize Obamacare.