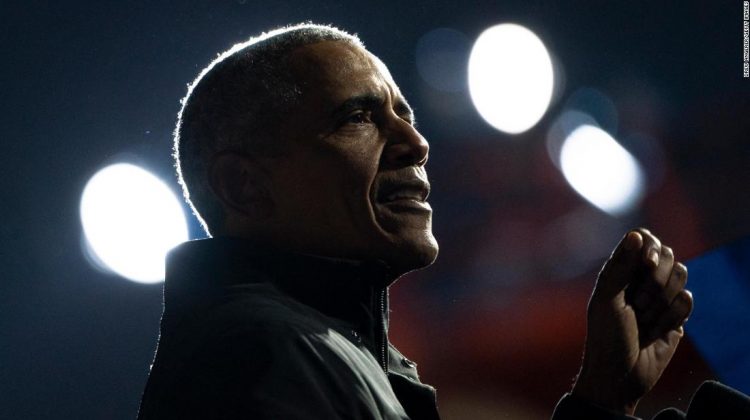 Obama’s comments came a day before the Senate is set to vote on whether to advance the For the People Act, the first procedural test of the bill.

During a grassroots conference call for the National Democratic Redistricting Committee, the former President also argued that America’s “own history” makes clear the importance for fighting for democracy and warned that “we are going to have to be vigilant in fighting back attempts by the few to silence the many.”

“The violence that occurred in the US Capitol on January 6, just a few months ago, should remind us that we can’t take our democracy for granted,” Obama said. “Around the world, we have seen once vibrant democracies go into reverse, locking in power for a small group of powerful autocrats and business interests and locking out of the political process dissidents and protestors and opposition parties and the voices of ordinary people.”

Obama added: “It is happening in other places around the world and these impulses have crept into the United States. We are not immune from some of these efforts to weaken our democracy.”

The former President opened the call by noting that since he left office in 2017, he has tried to “not to weigh in on the day-to-day scrum in Washington.” But the vote set to take place on Tuesday “is more than just a particular bill coming up or not coming up to a vote.”

Republicans, in response to losing the White House and the Senate in the last election cycle, have responded by pushing an array of restrictive voting laws at the state level, all of which has been cheered on by former President Donald Trump. Democrats view the Senate bill as the primary way they can combat the restrictive laws that have already been passed and signed in Republican-controlled states or those that are currently working through state legislatures.

It is unlikely that the For the People Act will pass the initial hurdle on Tuesday, but Democrats see the vote as a chance to highlight their unity, creating a clear contrast with Republicans who are steadfastly against it.

Central to the vote is West Virginia Democratic Sen. Joe Manchin, who Obama specifically mentioned during his remarks.

Manchin, after come out against the initial voting rights bill, signaled last week that he was open to voting for a modified version of the voting rights bill, including declaring Election Day a public holiday, expanding early voting to at least 15 consecutive days and banning partisan gerrymandering. Even if Manchin ends up supporting the bill, Democrats would need 10 Republicans to join them to break the filibuster.

Many Democrats worry that such a compromise would not go far enough, and Obama said that even the bill being considered doesn’t have “everything I would like to see” in a voting rights package. But the former President but said it was an important step to ensuring the future elections are fair.

“Right now at least, Republicans in the Senate are lining up to try to use the filibuster to stop the For the People Act from even being debated,” Obama said. “Think about this: In the aftermath of an insurrection, with our democracy on the line, and many of these same Republican senators going along with the notion that somehow there were irregulates and problems with legitimately in our most recent election. They are suddenly afraid to even talk about these issues and figures out solutions on the floor of the Senate. They don’t even want to talk about voting. And that is not acceptable.”

Former Attorney General Eric Holder, who leads the redistricting organization, joined Obama for the call. Both he and Obama made the case that while the United States can withstand chaotic elections like 2020, the country will suffer if that becomes the norm.

“If we have the same kind of shenanigans that brought about January 6th, if we have that for a couple more election cycles,” Obama said, “we’re going to have real problems in terms of our democracy long term.”