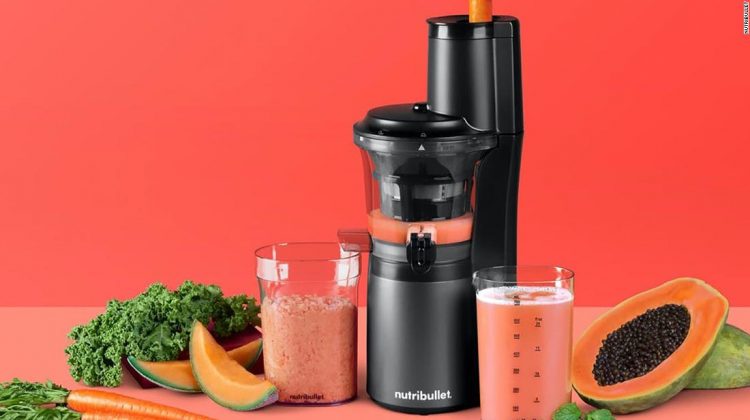 Not gonna lie: The pandemic wreaked some serious havoc on my waistline. Stress baking, over-imbibing and choosing Netflix binges over workout sessions have the words “beach season” striking terror in my heart. So when I had the opportunity to test the new Nutribullet Slow Juicer, I leapt from my well-worn perch on the couch, ran to the store to stock my fridge with lots of fruits and veggies and got busy juicing my way back to a healthy wellness plan.

With a kitchen counter that quickly began to resemble a farmers market, I plowed through the included recipe guide, getting a little thrill with each strawberry, orange, lemon, handful of greens, spear of pineapple or chunk of ginger root I sent down the juicing shoot. But is the new machine, now available for $199.99, worth its price tag? Read on to find out.

Known for its personal-size and full-size blenders (we’re smitten with the Nutribullet Smart Touch Blender), the brand also offers three juicers. The newest version, the low-speed, high-torque Slow Juicer, is made to squeeze out high-quality, nutritious juices using even the toughest fruits and veggies.

The juicer comes with several pieces: a 150-watt motor base, juice bowl, juice bowl cover, steel-tipped auger, juicing screen, rotating bowl brush, pulp container, 24-ounce juice container, food pusher and cleaning brush. And as someone who already keeps a Vitamix, coffee maker and coffee grinder out on my counters 24/7, I appreciate its compact profile: At about 18-inches tall by 5-inches wide in basic black, it’s small enough to leave out for regular use.

Now, what, exactly, makes a slow juicer different from a regular juicer? Generally sold at a higher price point, they don’t offer quite as much juice, but they do produce more pulp, meaning more nutrients come through in the end product. Typically quieter than other varieties, they also take a little more time to process and clean, but leave no trace of bits of leafy greens in your glass.

Besides juice, the Slow Juicer can also be used to make almond milk, and the recipe guide includes instructions for reusing the pulp byproduct for those who hate to waste (think muffins or veggie patties).

Touted as powerful, quiet and easy to use, I found the assembly to be as simple as advertised. Once I gave the pieces a quick wash in warm, soapy water, I put the whole thing together in just a few minutes, referring to the easy-to-follow illustrated guide. When you turn the machine on, the auger chops everything up, expelling the pulp into one container, while the juice collects and can then be poured out via a tap into another container. As far as noise levels go, it’s definitely not silent, but it’s pretty darn quiet — much quieter than a blender, which is good news for those who want to juice early in the morning before the rest of the family is up.

For my first juice, I went for Apple-Pearberry, which calls for 1 cup of strawberries with the stems on, two apples and two pears. A little prep work is necessary — the ingredients need to be cut down to fit into the 3-inch feed chute. But one I started popping them in, I had 24 ounces of juice in about 1 minute. The result? Delicious. “It’s just like a strawberry Julius,” one of my taste testers said, quickly refilling his glass.

Another winner: the Sunshine Delight, which includes two romaine hearts, a cup of spinach, two cups of pineapple and an orange. Again, you have to get things ready first — the orange needs to be peeled with the white membrane taken out; the pineapple needs to be chopped with its rind removed — but, again, it all juiced perfectly in about 60 seconds, with absolutely no bits from the greens in the juice.

In fact, everything we threw at the Nutribullet Slow Juicer came out completely pulp-free: celery, carrots, mint sprigs, even sweet potato.

One recipe I plan to put on repeat: juice shots. Designed to drink in 2-ounce portions, the trendy juices are said to offer an immunity, energy or digestive assistance boost. And whether or not they really work, everyone in my household was a fan. The spicy Ginger Zinger, with its ample amount of ginger root, lemon, orange, apple cider vinegar and dash of cayenne pepper, is just the thing for a late-morning or afternoon pick-me-up and feels so much healthier than yet another cup of coffee.

But the one recipe I didn’t love? Almond milk. As someone who goes through a carton of almond milk a week, I was excited at the idea of making it at home, but it turned out grainy and flavorless. The recipe notes it’s optional to run it through a strain or to remove the skins before juicing (and also suggests adding vanilla or cinnamon, which I will likely try), but that seems like a lot of effort for little return. Plus, I spent $8.99 for a bag of raw almonds, and after soaking them in water overnight, didn’t feel like the result justified the time involved and price. On the other hand, the process does leave you with a lot of almond pulp that I will turn into almond flour (which is also pricey) and for those who, don’t like added ingredients in their almond milk (what the heck are tricalcium phosphate, ergocalciferol and gellan gum, anyway?), it may be worth experimenting with.

Once you’re done juicing, cleaning of the juicer is pretty much a breeze. The parts all come apart fairly easily (the auger can take a little tugging to remove) and need to be hand-washed. The included brush is perfect for use on the mesh juicing screen, which collects some residue from the ingredients. The worst part is cleaning the pulp plug in the juice bowl. It improved once I discovered there’s a removable rubber plug to help force out any pulp stuck in the spout (yes, there will be a build-up of pulp in there, and, yes, it’s gross).

So, yes, I was truly impressed with the juices the Nutribullet Slow Juicer turned out. As someone who hates pulp in my OJ, it was a pleasure to sip on silky smooth, tasty juices that I knew were bursting with nutrients and were low calorie. The fact my family loved them, too? A healthier icing on the cake.

But is juicing worth the price and effort? Take the Apple-Pearberry recipe: The ingredients for 24-ounces cost me about $4.50 and I had to rinse the fruit, and slice and de-core the pears and apples before loading them into the machine. By comparison, my neighborhood juice bar charges about $9 for a similar-sized concoction. To make five 2-ounce servings of the Ginger Zinger, I spent $4.73 (not including the vinegar and cayenne pepper which were already in my pantry) and had to cut and peel the oranges and lemon. Juice shots at that same shop, however, run $2.95 a pop.

I’d say that’s a pretty significant savings, not to mention the time saved not only waiting in line and for your order but also driving to and from the store.

In all, if you’re looking for a new wellness plan and think you’ll juice daily, the Nutribullet Slow Juicer is pretty much a no-brainer. Or, as my husband who has been hand squeezing his morning orange juice for years said after trying a few Ginger Zinger juice shots: “I’m drinking this every day from now on.”