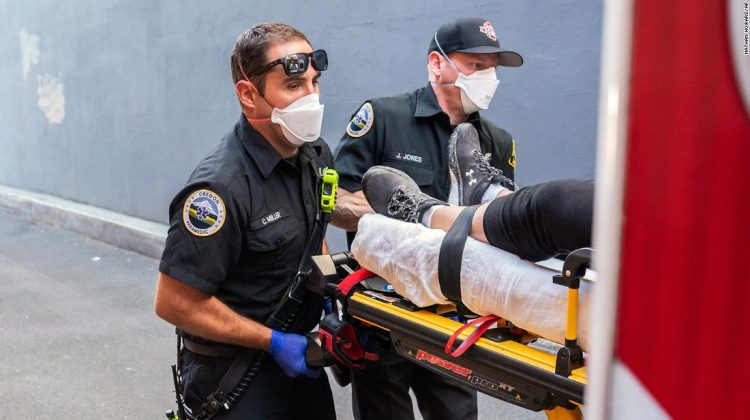 Portland set record-high temperatures three days in a row, topping out at 116 degrees on Monday. Seattle hit 108 degrees, a new record. At least two locations in Washington reached 118 degrees, which, if confirmed, would tie the state temperature record that dates back to 1928.

A town in southwest Canada registered a temperature of 117.5 degrees — the highest ever recorded in the country, and around 48 degrees above what’s normal for this time of year. Scientists have told CNN the heat wave is a clear sign of the climate crisis, and similar extreme heat events will happen more frequently in the future.

In Washington, at least 676 people visited emergency departments for heat-related symptoms from Friday through Sunday alone — before peak heat descended upon the state. Cory Portner, a spokesperson for the Washington State Department of Health, said 81 of those cases led to inpatient admissions.

King County, which includes Seattle, had 40 emergency department visits for heat-related illness on Saturday and 91 on Sunday, according to Gabriel Spitzer, communications specialist for Public Health Seattle & King County.

“Over the last three years, previous maximum single-day count of [emergency department] admissions for heat-related illness was 9,” Spitzer told CNN in an email.

The Oregon Health Authority reported a total of 506 heat-related visits to emergency departments and urgent care centers over the past four days. At least 251 visits occurred on Monday alone, when temperatures were highest.

In the Portland area, the 97 emergency department and urgent care clinic visits for heat illness is nearly the same number of cases they would see all summer, according to Multnomah County communications director Julie Sullivan-Springhetti.

“The record breaking heat also broke records for calls for help. Emergency calls, visits to the emergency rooms, and calls for people and pets reached all-time highs,” Sullivan-Springhetti said in an email to CNN.

Nearly 600 people went to the county’s cooling centers in the Portland area on Monday. Around 50,000 bottles of water, 32,000 electrolyte packets and 14,000 cooling towels were delivered to homeless people, Sullivan-Springhetti said.

In addition, animal wellness calls were up 330% more than on a typical weekend, many of which were for animals in hot vehicles and animals in distress, she said.

As temperatures rose in Vancouver on Tuesday, the Royal Canadian Mounted Police issued a statement about a “concerning increase in sudden deaths amid the heat wave.”

“We are seeing this weather can be deadly for vulnerable members of our community, especially the elderly and those with underlying health issues,” RCMP Cpl. Mike Kalanj said in the news release. “It is imperative we check on one another during this extreme heat.”

The RCMP in Burnaby has responded to more than 25 sudden death calls in a 24-hour period since Monday, with heat believed to be a contributing factor in the majority of the deaths, the release said.

Temperatures are expected to be hot in the 80s and 90s in Portland and Seattle through the rest of the week. The heat should wane a bit next week, according to CNN Weather’s Jackson Dill, but temperatures will still be warmer than normal.

Kate Weinberger, an environmental epidemiologist at the University of British Columbia, previously told CNN that hospitalization records typically only look at medical terms such as heat stroke, and neglects other potentially heat-related causes of death, like heart attacks.

“Heat likely contributes to many more deaths from causes other than heat stroke, because heat can exacerbate other chronic diseases, such as heart and lung conditions,” Weinberger told CNN. “Given the danger posed by heat, events like the ongoing heat wave in the Pacific Northwest need to be taken very seriously.”

Experts told CNN that part of what made this heat wave so dangerous was that the Pacific Northwest is underprepared for such extremes.
Seattle and Portland rank first and third, respectively, among cities with the highest proportion of households without air conditioning, according to a US Census Bureau survey of 25 major metropolitan areas.

The lack of air conditioning “makes it challenging for many residents to stay home, especially during a pandemic where many are still being asked to telecommute,” said Anthony Derrick, press secretary for Seattle Mayor Jenny Durkan. “Additionally, Washington state has not yet fully reopened, meaning that many indoor spaces are still operating at reduced capacity.”

Derrick said the capacity restrictions were relaxed for Seattle-area cooling centers, which many people took advantage of as temperatures soared.

The urban heat island effect compounds heat-illness issues. Areas with a lot of asphalt, buildings and freeways tend to absorb a significant amount of the sun’s energy and emit it as heat. They are much hotter than areas with green space — parks, rivers, tree-lined streets — which absorb and emit less solar energy.
A 2019 study found that the hottest areas within city limits were low-income neighborhoods and neighborhoods of color, places that historically have enjoyed the least improvement and investment. These are neighborhoods slotted next to traffic-choked freeways, where you can walk blocks without seeing trees, let alone a park.