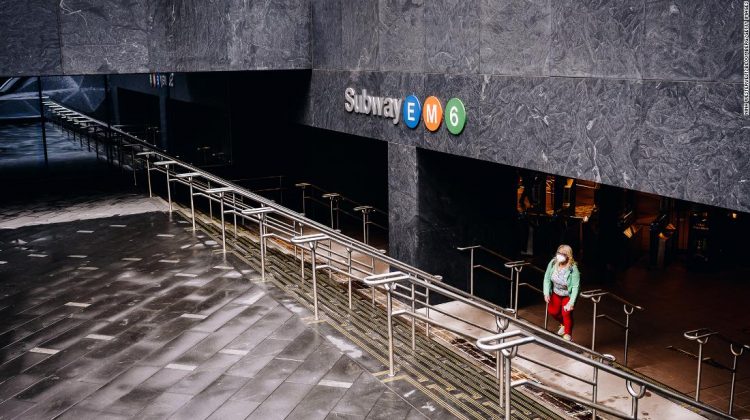 Although several states’ economies have already fully recovered — and are even outpacing — their pre-Covid levels of economic activity, New York is by far the worst-performing state, according to the Back-to-Normal Index created by CNN Business and Moody’s Analytics.

The index shows that the US economy as a whole was 93% back to normal as of June 18. But New York was only at 83%, leaving it with the furthest to go to get back into pre-Covid shape.

New York isn’t the only state below the 90% mark, though it is at the bottom of the list.

In 2019, before Covid hit, New York had the third-strongest economy among US states, lagging only Texas and California. The state’s gross domestic product — the broadest measure of economic activity — was nearly $1.8 trillion, on par with the GDP of Italy. More than $1 trillion of that came from economic activity in New York City. The state contributed more than 8% to America’s overall GDP that year.

In 2020, New York’s GDP dropped to $1.7 trillion. That might not sound like a big difference, but we’re dealing in trillions of dollars here. When states that are economic powerhouses underperform, it’s not great for the recovery of the entire nation.

New York’s GDP contracted by 5.9% last year, a bigger decline than the total US GDP suffered, putting it at No. 47 out of all 50 states for economic growth.
The jobs situation looks even worse. At 7.8% unemployment, New York has one of the highest jobless rates in the nation. US unemployment as a whole stood at 6.1% in April and fell to 5.8% in May.

Why New York lags behind

The biggest factor is the scope of the economic destruction New York City suffered during the height of the pandemic, when it was the epicenter of the outbreak. This led to more severe lockdown protocols than in many other parts of the country.

On top of that, the New York City economy is heavily reliant on service-driven industries. But offices are still mostly empty, and only some workers are commuting. That’s bad news for the coffee shops, dry cleaners and lunch spots that support the office infrastructure.

And the challenges don’t end there: One of the components of the Back-to-Normal Index that holds New York back the most is the shortage of restaurant-goers, according to Colyer. The state is still 40% below its pre-pandemic, eat-in diner volume, while the nation as a whole is down only 13%.

“I think with New York lifting its restrictions last week, I would expect for some of that gap to close,” Colyer told CNN Business.

The state has been more cautious than most in lifting restrictions to avoid new flare ups of the virus. But the scarring economic effect will be a factor for a while.