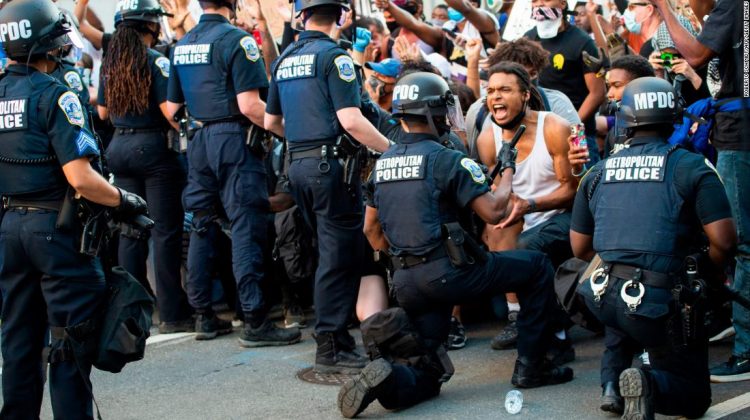 The aides put together the proposed proclamation on June 1, 2020, the Times reports, the same day that protesters were forcefully cleared from Lafayette Park — a park across the street from the White House traditionally used for peaceful protests and demonstrations — just prior to Trump’s controversial photo op at St. John’s Church, where he held up a Bible after he had declared himself the “law and order” President.

At the time, a livid Trump made clear to then-top Cabinet members Attorney General William Barr, Defense Secretary Mark Esper and Chairman of the Joint Chiefs of staff Mark Milley that he wanted active members of the military to patrol the streets in DC, an official told the Times.

Trump denied to the Times that he had wanted to deploy the military in the nation’s capital. “It’s absolutely not true and if it was true, I would have done it,” he told the paper.

The Times reporting comes a day after CNN obtained excerpts from a new book by Wall Street Journal reporter Michael Bender that say Milley, the top US general, repeatedly pushed back on Trump’s argument that the military should intervene violently to quell the civil unrest that erupted around the country last year. According to the excerpts, Milley often found he was the lone voice of opposition to those demands during heated Oval Office discussions.

Earlier this month, a watchdog report found that the US Park Police had not cleared the racial injustice protesters from Lafayette Park last year to allow for the then-President’s march to St. John’s Church. The report — released by the Interior Department’s inspector general — found that the demonstrators had been removed to allow a contractor to install a fence safely around the White House.

The Park Police had the authority to move the protesters during last June’s clash outside the White House, the report also said.

The response from law enforcement during the 2020 Lafayette Square incident has been a major source of contention, as Democratic lawmakers have pushed for information about who gave the order to clear the park, which federal agencies were involved and what measures and authorizations were used.