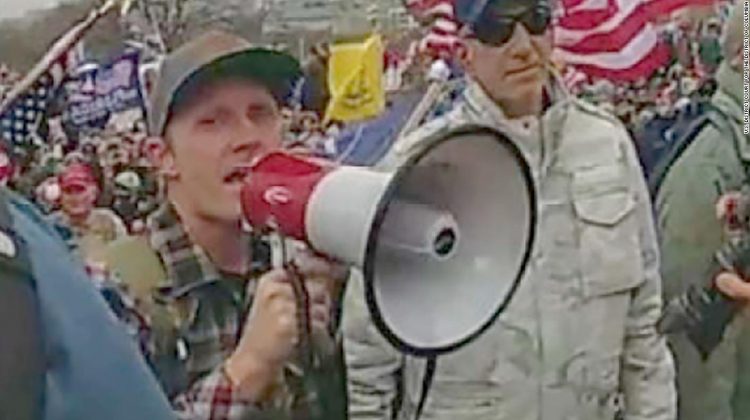 Sean McHugh of Auburn, California, is accused of obstruction and assaulting officers with a dangerous weapon, among other charges.
The video was released in 12 short clips by the Justice Department on Friday. Much of the footage was taken from police body cameras.

“If we protected our country with our Second Amendment, you guys wouldn’t be standing there right now,” he yells in one clip. “You better heed our warning, because when we do protect our country, you’re not gonna like it.”

In another video, he yells, “You guys like protecting pedophiles?” McHugh was convicted in 2010 on a state charge of having sex with a minor.

In some of the video clips, other rioters chant “our house” and yell about war.

One video shows McHugh appearing to help other rioters guide the frame of a large Trump sign into officers.

McHugh has been charged with eight federal crimes. He has not yet been formally indicted or entered a plea.

On Friday, a federal judge decided he would be too dangerous to release from jail as he awaits trial.

Chief Judge Beryl Howell of the DC District Court railed against McHugh during his detention hearing. She said actions like his have blemished the reputation of American democracy.

She said the siege has given “fodder to unfriendly nations to criticize this democracy.”

She also noted that McHugh was strategic in leading the pro-Trump mob at the police line and toward the Capitol.

His attorneys had argued he wasn’t a threat to the community, lived a stable life with his family and didn’t intend to hurt anyone at the Capitol. His attorneys say he is not part of any organized right-wing extremist group, either.

Howell has repeatedly commented on the broader national implications of pro-Trump rioters violently attempting to stop Congress from certifying the Electoral College vote.

“This is not an incident that happened even a year ago, and this is fresh in the mind of the American people,” Howell said on Friday, noting that the consequences of the attack have far from subsided. “January 6, 2021, was not that long ago.”