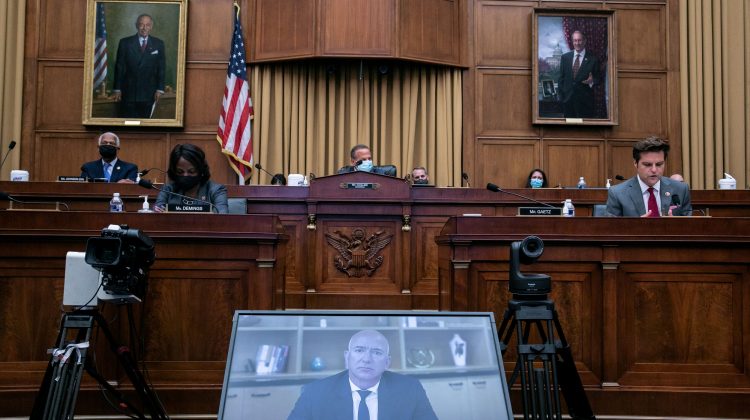 Amazon CEO Jeff Bezos speaks via video conference during a hearing of the House Judiciary Subcommittee on Antitrust, Commercial and Administrative Law on “Online Platforms and Market Power”, in the Rayburn House office Building on Capitol Hill, in Washington, U.S., July 29, 2020.

Voters favor tech regulation but are less supportive of measures they perceive to hamper their favorite services, according to a poll conducted by Morning Consult and commissioned by tech-funded advocacy group Chamber of Progress.

The survey results come Wednesday, just hours before the House Judiciary Committee is set to debate a series of antitrust bills aimed at reining in the power of the largest tech firms. The bills follow an investigation by the panel that found that Amazon, Apple, Facebook and Google hold monopoly power.

The Big Tech companies or industry groups they fund, including Chamber of Progress, have publicly opposed the bills, saying they would fundamentally alter services users have come to rely on. According to the new poll, that’s a scenario voters would oppose.

Overall, survey respondents didn’t rank tech regulation high on their list of concerns for Congress. Of a list of priorities including the economy, public health, climate change and infrastructure, 44% of respondents ranked technology company regulations as last on the list of what Congress should address.

Prior to seeing specific examples of how large tech platforms would have to change their services, 53% of respondents said they at least somewhat supported Congress passing legislation to impose new regulations on companies like Amazon, Apple, Facebook and Google.

But when given specific examples of how the businesses might have to alter their offerings under the bills, more respondents said they would oppose them. For example, when presented with the possibility that Amazon could be restricted from giving free shipping on some Amazon Prime products, just 15% said they would still support such legislation, 17% said it would have no impact on their thinking, 9% said they didn’t know or had no opinion and 59% said it would make them at least somewhat more likely to oppose the bill.

Two of the bills introduced by a bipartisan group of lawmakers earlier this month could have the greatest structural impact on the tech platforms. The American Choice and Innovation Online Act would prevent dominant platforms from favoring their own services over competitors that use their marketplaces, while the Ending Platform Monopolies Act would prohibit such platforms from owning business lines that present a conflict of interest. That presents a clear threat to companies like Amazon and Apple, which operate marketplaces on which they also offer products.

After being presented with other possible implications of the bills, like Google being restricted from showing Google Maps in its main search results or Apple being prevented from pre-installing certain apps, 39% said they would still at least somewhat support such legislation. Both Democrats and Republicans were more likely to oppose the bills after being presented with the scenarios.

Morning Consult surveyed nearly 2,000 registered voters from Thursday to Monday on a range of questions about tech regulation. It gave the margin of error as +/-2%. Of the group, 40% identified as Democrats, 34% as Republicans and 26% as Independents.

Chamber of Progress identifies itself as a center-left group.

WATCH: Here’s why some experts are calling for a breakup of Big Tech after the House antitrust report