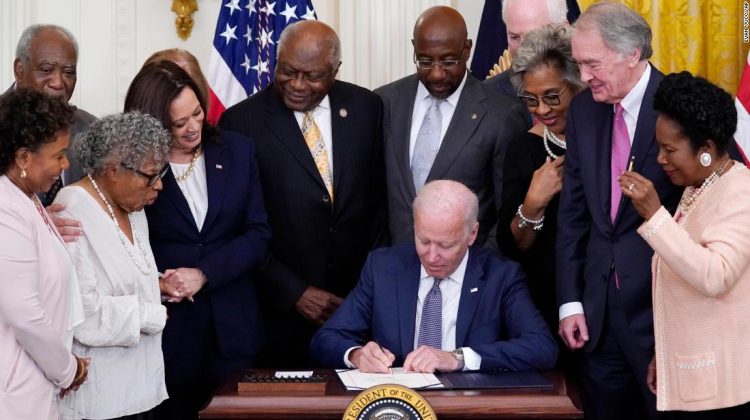 While June 19 — which commemorates the end of slavery in the United States — falls on a Saturday this year, governors across the country announced in quick succession a range of plans for their state offices Friday, the closest workday to the new holiday.

Many states like Maryland, Nebraska, Missouri, West Virginia and Alabama will give most public employees the day off, but government workers in other states, like California, will have to wait to feel the effect of the new law.

“It is encouraging to see bipartisan efforts to recognize the importance of Juneteenth,” a spokesperson for California Gov. Gavin Newsom’s office said in a statement. “The Governor issues a proclamation each year to celebrate this important day. At the state level, establishing a holiday usually requires legislation and collective bargaining.”

Similarly, in Washington, DC, “many District employees will continue serving to maintain essential District operations,” according to a news release from Mayor Muriel Bowser’s office. This includes walk-up vaccination sites, the Department of Motor Vehicles and the Department of Parks and Recreation. And while the District’s schools will be closed, high school graduation ceremonies will commence.
The patchwork of responses underscores the rarity of a new federal holiday. Juneteenth is the first one to be established since Martin Luther King Jr. Day in 1983 and becomes at least the eleventh federal holiday recognized by the US federal government.

On the federal level, the US Office of Personnel Management announced in a memo that most federal employees would have Friday off.

“Agencies should direct such employees to not report to work on Friday — unless the agency determines that their services are required. If employees are required to work during qualifying holiday hours, they will earn holiday premium pay,” the memo said.

A meeting of vaccine advisers to the US Centers for Disease Control and Prevention that was scheduled for Friday was also rescheduled because of the Juneteenth holiday.

While private businesses aren’t bound by federal holidays like government agencies, many major corporations are celebrating Juneteenth in a similar way.

US corporate employees at Apple will have Friday off, as will employees of Lyft and Peloton. Other companies, like Google, struck a middle ground, eliminating meetings on Friday in honor of the holiday. The New York Stock Exchange will also be open Friday.

The legislation, which was passed by the House on Wednesday, gained momentum following Black Lives Matter protests sparked by the police killing of George Floyd last year. It passed the Senate on Tuesday after Wisconsin Republican Sen. Ron Johnson, who blocked the legislation in 2020, dropped his objection.