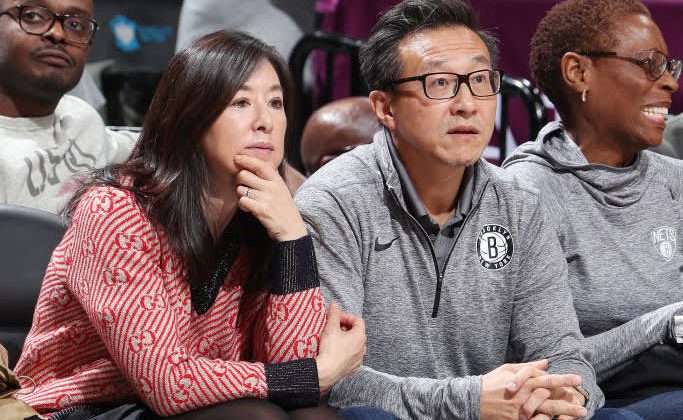 Nets Owner Joseph C. Tsai and Clara Wu Tsai at the game between the Brooklyn Nets and Indiana Pacers on December 21, 2018 at Barclays Center in Brooklyn, New York.

Brooklyn Nets owners Joe Tsai and Clara Wu Tsai are taking the next steps to distribute money from a $50 million commitment to help minority communities.

The sports owners created a $2.5 million loan program that targets Black-owned businesses impacted by Covid-19. The money derives from the Tsai foundation’s Social Justice Fund, which was established last year, and aims to combat economic inequality in Black communities.

The new loans are part of the “EXCELerate” program and catered to owners with credit scores 620 or below. But though applicants will not be judged on the scores, business owners need to be “character-based” eligible. Hence, they’ll need to have good references to secure their loan.

There are two loan types. The “rapid recovery” loan offers immediate funds up to $15,000 and no interest attached. These loans are for businesses that stayed open during the pandemic but need capital for new equipment, renovations, rent or leases.

The “restart” loan is for business owners who temporarily closed or reduced hours due to the pandemic. Well-referenced applicants can apply for up to $100,000 at 2% interest to help restart and normalize operations, and repayments depend on the success of the businesses. When money from the $2.5 million program is repaid, it returns and becomes eligible for new loans. Interest made from the loans will be used for administration costs.

“We know that there is no social justice without economic opportunity, which is why we are so excited to launch the Brooklyn EXCELerate Loan Program aimed at elevating Brooklyn’s BIPOC [Black, indigenous, and other people of color] business owners post-pandemic and doing our small part to overcome barriers this community faces in accessing capital,” said Wu Tsai in a statement.

The announcement used statistics from the National Bureau of Economic Research, which states Black-owned businesses declined by 41% during the earlier stages of the pandemic, compared to 17% among white-owned businesses. It also says this loan program “seeks to address the obstacles within capital markets that create unfair hurdles for these entrepreneurs.”

Applicants need “local community members” for references, and loans will not “require neither collateral or guarantor.” Social organizations including TruFund Financial and Brooklyn Alliance Capital will oversee the loans. Also, the Tsai foundation hired Gregg Bishop as executive director of the fund. Bishop is the former commissioner of the New York Department of Small Business Services.

“As the city comes back from the pandemic, we have an opportunity to do it better than we did before, to address some of the longstanding barriers preventing the accumulation of Black wealth and ensure that everyone can equally benefit from the capital that is coming into our city anew,” said Bishop in a statement.

“You have to admit that racism exists, and you have to understand that there are systemic imbalances in society that cause racism and cause lack of economic mobility and lack of wage trajectory,” said Wu Tsai.

Tsai and Wu Tsai purchased a majority stake in the Nets in 2019 for $2.35 billion after buying an initial share in 2017. And they also own WNBA franchise, the New York Liberty.