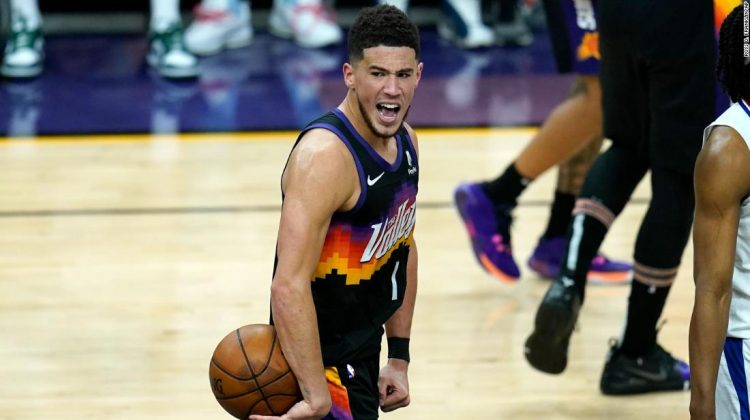 Paul was missing the first game of the Western Conference Finals best-of-seven series after he was placed in the league’s health and safety protocol after testing positive for Covid-19.

But even without their “leader” as Booker calls him, the Suns were able to clinch a vital home victory, thanks to Booker’s stellar performance in front of a loud crowd at Phoenix Suns Arena.

“I like the way Devin did it,” Williams told the media. “He didn’t inject himself into the game. He just did it out of what we do.

“There are times where a guy scores and you just want to go grab the ball and jack up a shot. I thought the way Devin did it tonight was within our scheme and what we do.”

READ: Money talks: Michael Jordan and the impact of not being an athlete activist

Doing it for Paul

Since being drafted in 2015 by the Suns, Booker and the team have had to endure some tough seasons.

Although Booker himself has improved year-on-year — he has been named an NBA All-Star the last two seasons — qualifying for the playoffs had remained elusive.

That was until Paul joined the team in the offseason.

The 11-time All-Star seemed to act as the glue for an already talented Suns squad, helping to lead them to the playoffs for the first time since 2010 with a regular season record of 51-21.

Although many of the players are in their maiden playoffs run, they’ve shown no signs of nervousness, beating some big names — including LeBron James and MVP Nikola Jokic — in their first two series.

So when the news came out that Paul had tested positive for Covid-19 and could miss game time, it looked to be a major set back for the Suns.

However, against a Clippers team who were missing their own superstar in Kawhi Leonard, Booker stepped up when his team needed him most.

After a relatively quiet first half, he exploded after the break, scoring or assisting on 43 of the Suns’ final 50 points.

He became the first Suns player since two-time MVP Steve Nash in 2005 to record a triple-double in the playoffs.

Afterwards, Booker and his teammates rung Paul to celebrate with their absent colleague.
“He’s our leader. We lean on him for a lot,” Booker said. “We know how disappointed he is and frustrated he is he couldn’t be out here for Game One of the Western Conference Finals, especially knowing his past history around this time.

“But we had him all the way through. We brought him in the locker room, had him in our after-game huddle. He’s proud of us. He’s ready to get back, he’s working and we can’t wait to have him.”

Elsewhere on Sunday, the Atlanta Hawks advanced to their second Eastern Conference Finals in 50 years after beating the Philadelphia 76ers 103-96 in a series-deciding Game Seven.

After a dramatic playoff series, which included dramatic collapses and comebacks, it was Kevin Huerter who carried the Hawks early on, eventually finishing with a team-high 27 points.

Talisman Trae Young got hot late in the contest, finishing with 21 points and 10 assists, keeping the 76ers — with Joel Embiid scoring 31 points — at bay.

Visit CNN.com/sport for more news, features, and videos
“Everybody is fired up,” forward John Collins said afterwards. “We’ve worked all year to be in moments like this. Game Seven, I feel like we all had each other’s back. We couldn’t have wanted anything else more than we did tonight. We pulled through for a victory.”

The Hawks last made the conference finals in 2015. Prior to that, they hadn’t been a step away from the NBA Finals since the 1969-70 season.

They will face the Milwaukee Bucks in the Eastern Conference Finals, after the Bucks beat the star-studded Brooklyn Nets in their series.

Game One is scheduled for Wednesday in Milwaukee.