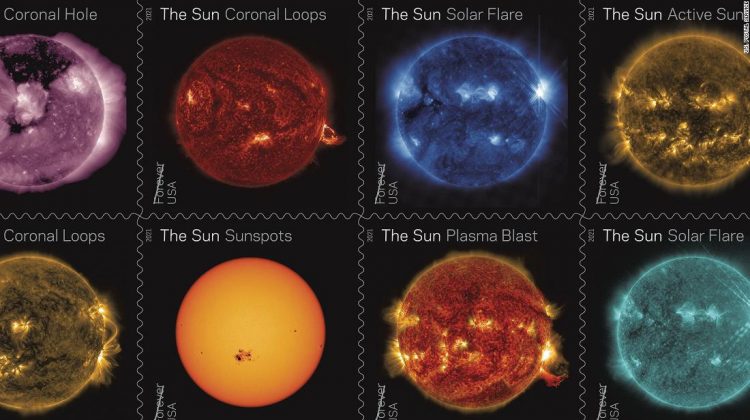 “I look at each of these pictures from the Solar Dynamics Observatory and am reminded of how they help us learn more about the Sun and the way its constantly changing atmosphere can affect Earth and the planets,” said Dr. Nicky Fox, Division Director for NASA’s Heliophysics Division at NASA Headquarters in Washington, according to the news release from NASA.

The stamps were issued by the Postal Service during a ceremony at the Greenbelt Main Post Office in Maryland on Friday.

“We hope these amazing stamps will help generate the same sense of wonder and curiosity about our star that inspired our ancestors and the scientists at NASA to want to better understand the sun, space, and the myriad of possibilities that exist in our solar system, in our universe and beyond,” said Thomas J. Marshall, the Postal Service’s general counsel and executive vice president, according to a statement.

The SDO spacecraft was launched in 2010 and began collecting data a few months later with two imaging instruments that provide complementary views of the sun, according to NASA. It also measures the sun’s magnetic field and the motion of solar material at its surface and also allows scientists to probe deep into the sun’s interior, NASA said.

“What SDO has done is given us the ecology of the Sun…. It’s giving us the big picture, one detail at a time,” said Dr. Dean Pesnell, SDO project scientist at NASA Goddard according to the release.

The new set of stamps features 10 images from the SDO.