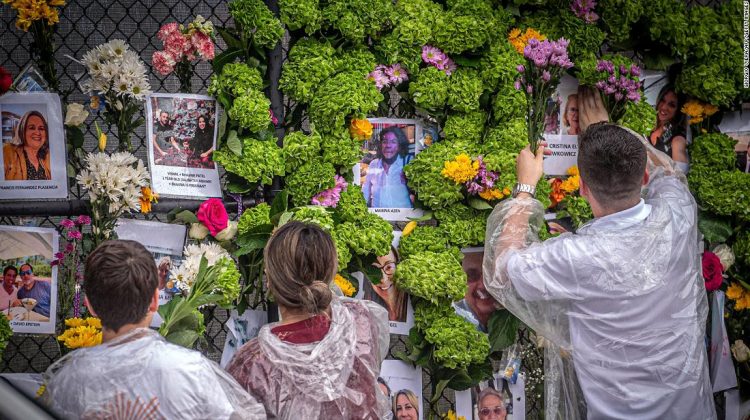 Yet I did not realize that my friends Myriam and Arnie Notkin lived there. About two hours after I learned of the collapse I received a message from one of Myriam’s daughters, asking me if there was anything I could do to find out if they were still alive. I am a commissioner in the City of North Miami Beach. I know that if I were in her situation I would reach out to anyone with possible contacts for help. I made phone calls but could not get any information; it was still too early. I was desperate to help find Myriam and Arnie.

The day was a roller coaster — no one knew what was going on, and at one point a rumor circulated that Arnie was alive but apparently it was a case of mistaken identity. For many years he was a PE coach at one of the elementary schools and has had a deep connection to the Miami Beach community. For so many people, it was important to find them. We needed to know where he and Myriam were.

I decided to post a picture of the couple on my Facebook page asking if anyone has seen them. I also posted it on two other Miami Beach Facebook pages. As of Tuesday morning, it has been shared over 2,200 times. This is all because of the love Myriam and Arnie have given to so many people. Reading the comments about both of them is beautiful, and you can tell that everyone is being sincere.

Just like my family, Myriam and her family were among the Jewish Cuban immigrants that came to South Florida in the ’60s and ’70s. We were a very united community. I went to school with Myriam’s daughters, one who was in my grade, from elementary up to high school graduation. Myriam and her husband raised three talented and special girls. She was a widow who later on in life met and married Arnie.

Pre-pandemic, I would see them both at the movie theater for premieres often. We were always in line together — and those waits were sometimes over an hour. In line, Myriam would tell me how wonderful my mother was. She would then proceed to tell the person standing next to us in line, the same. My mother passed away 40 years ago, and Myriam was one of the few people who not only remembered her but wanted to talk to me and share stories about her. Something I will always treasure.

Arnie would be sitting down on some bench, since it was too much for him to wait in line. Sometimes I would approach him just to talk. He always had an interesting story to tell. He had such a good memory. I really believe he remembered each and every one of his students. He always talked to me about his students that became famous, and even the non-famous that I also knew.

Myriam and Arnie lived in the section of the building that collapsed. We are still praying for a miracle.

The South Florida community has come together one more time. We are always there for each other in times of need. Police and rescue from all the different departments have been at the site and surrounding areas nonstop.

Just Monday, as I visited the site once again, one of the police officers from the city of Surfside where the building is located told me how North Miami Beach police officers showed up one hour after the building collapsed and, in different shifts, have been there throughout. Some of those NMB police officers told me how the surrounding condos have provided them with water, food and use of their bathrooms. Just a symbol how we all care for each other.

The pictures circulating on the news of Arnie and Myriam show a happy couple smiling — that is what they looked like every time I saw them. They both had a beautiful smile, a smile of love.

And like all the other families and friends of the unaccounted for loved ones in the Surfside building collapse, we are holding on to the hope that we will see those smiles in person again.