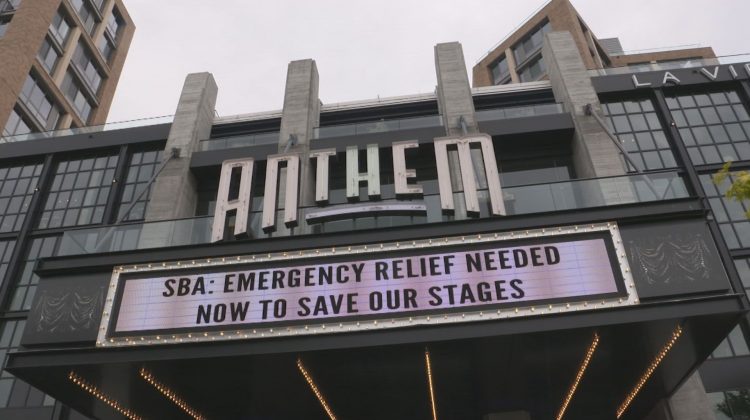 The North Park Theatre in Buffalo, New York, is a local landmark. Featuring a single screen, 600 seats and ornate domed ceilings, it is an increasingly rare gem in a sea of multiplex cinemas.

“This is the kind of place you want to see a movie — you’re going to forget about the outside world and escape for a few hours,” said Ray Barker, the theater’s program director. He has been with North Park since the 1990s, when he started as a concession worker.

North Park has been around for a century, surviving major economic shocks like the Great Depression and 2008 Great Recession. When the Covid pandemic struck, it went dark, and now it desperately needs a lifeline.

The theater is waiting on a $200,000 grant it applied for under the Small Business Administration’s Shuttered Venue Operators Grant program, said Barker. North Park has reopened as pandemic restrictions lifted, but the aid is crucial to dig the landmark out of a mountain of debt accumulated over the last year.

“The bleeding has not stopped for 13 months. This program was supposed to help us, and it has not,” he said. The theater’s application has been submitted, but for more than six weeks, Barker said he’s gotten no word on its status.

The SBA’s SVOG program, a $16 billion fund, was created to help sustain the industry until in-person entertainment can resume. Music clubs, theaters, promoters and more can access grants of as much as $10 million, based on gross revenue from 2019, as a part of the program, which was included in the second Covid relief package that was signed into law in December.

The North Park Theatre in Buffalo, New York, is a historic movie theater that has been in business for a century. It is waiting on aid from the SBA’s Shuttered Venue Operators Grant Program.

The program’s application portal was snarled by technology glitches, opening and closing within hours of its debut on April 8, without any applications being submitted. It reopened weeks later after an uproar over the delay, and applicants like Barker rushed to resubmit in hopes of getting a much-needed grant.

But now the wait is on for him and thousands of others. As of midday Monday, more than two months after the initial launch of the SVOG, the SBA reported 1,445 grants had been awarded for a total of $833.4 million. The agency said in its weekly report that 7,118 applications remain in the submitted phase and 5,853 are in review. The combined requests represent $11.6 billion in grants.

One of those applications is from the Great American Music Hall in San Francisco. Dave Bruno, the venue’s general manager, said he is eagerly awaiting news about the status of a $2 million grant request. He has heard the application is “under review” by the SBA, but no word yet on the funding.

Like North Park, the music hall has a rich history, starting out in the early 1900s as a burlesque house, then a restaurant. It was reimagined as a concert hall in the 1970s. The aid will help to pay off debts, bring back employees and prepare to reopen later this summer, Bruno said.

“We could have been reopening sooner if we had the money, but right now it’s like we’ll be lucky to open when we’re scheduled to open,” he said. “By asking us to wait longer, you are asking all of our employees to wait to come back to work.”

In other Covid recovery programs, like the Paycheck Protection Program and the more recent Restaurant Revitalization Fund, recipients received funds within days of applying.

At a Senate hearing in May, new SBA Administrator Isabel Guzman testified that money would be flowing to businesses in need from the SVOG program soon, adding that the agency was in regular communication with stakeholders. She also acknowledged early technical difficulties with the application portal.

“We are processing through those applications as quickly as possible. It’s a very complex program by statute, with various types of entities, which has created a lot of various eligibility requirements along the way … and requires intensive applicant-by-applicant review,” Guzman said.

In response to questions about issues and the speed of application approvals under the program, the agency told CNBC in a statement: “We have [a] dedicated team of hundreds of reviewers working around the clock to process, approve and disburse funds as quickly as possible to get the nation’s venues back on track. In large part because of statutory requirements – created in the last Administration – the applications require extensive scrutiny. To further shed some light, applicants have included anywhere from 30 to 100 documents in their applications to ensure they met the statute’s guidelines and each needs review before moving on in the grant award process.”

The agency added that its current pace doesn’t reflect the high standards the SBA strives to meet.

A person familiar with the agency’s efforts said it is working with the White House and other agencies to allocate additional resources to get grants out quickly, but manual review of applications has slowed the process. The team that worked on the Restaurant Revitalization Fund is now helping administer the program, fraud controls have been optimized and a new navigator program to assist with IRS verification is being implemented, this person said. The person requested anonymity because they weren’t authorized to speak on behalf of the SBA.

For advocates, the pace of funding is unacceptable. The National Independent Venue Association, formed during the pandemic to help independent operators survive, has called on the SBA to resolve its interagency issues and release all funds immediately. The group, which has some 3,000 members across the country and lobbied for the SVOG program, said venues cannot reopen without aid.

The Anthem music venue in Washington, D.C. pleading with the Small Business Administration to release aid for shuttered independent venues.

Audrey Fix Schaefer, NIVA’s communications director, said there have been some recent changes and the agency has been more communicative in the last week, however, the desperation among applicants remains.

“The SBA is supposed to help small businesses. Every day that they do not release that money, the conglomerates are helped,” said Fix Schaefer, who is also communications director for several independent venues in the Washington, D.C., area. “Our employees will go to them. … Bands will go to them. It’s not just 2021, it is for the next five to 10 years.”

Venues need to bring back workers, pay off debts and prepare to reopen, Fix Schaefer said. She explained that many operators have burned through not only emergency aid, but personal savings.

“These venue operators have been without income since March of 2020. They’ve exhausted their savings. They have put second mortgages on their homes. They’ve drained their 401(k)s and their kids’ college funds. They’re taking loans that they would never normally take if they can, but they are exhausted — their options are exhausted,” she said.

For workers and music lovers like Bruno, the last year has been challenging both professionally and personally. The aid can’t come soon enough.

“For somebody like me, and everybody who comes to shows and participates in making shows happen, it’s our way of life. It’s having our way of life taken from us,” he said of the pandemic’s impact on the live entertainment industry.

Back in Buffalo, Barker’s message is that the grant the theater needs is about much more than just keeping the business he runs going — it’s about the community.

“They don’t just see a movie — they have a drink, or a post-movie coffee to talk about the film,” he said. “That helps all of these small businesses in the neighborhood. We are kind of the rising tide that lifts all boats, and if we’re not here drawing people in … then they get hurt. Everyone is interconnected in this economy.”