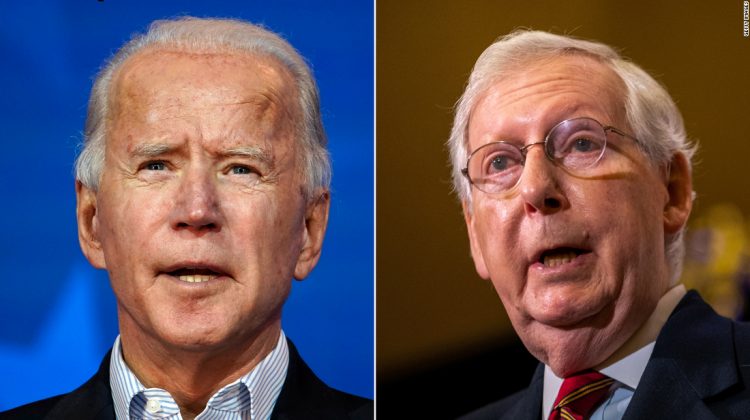 The call by the Kentucky Republican was the clearest sign yet that the Senate GOP may try to deny Democrats the 60 votes they need to pass a bipartisan plan unless they abruptly change tactics.

At an event in Kentucky on Monday, McConnell said when asked about the bipartisan deal, “I think it’s fair to say I’d like to see us get there and I do think the only way we can get there is to delink the two issues. They are really separate issues.”

The comments from the minority leader come after President Joe Biden on Saturday tried to walk back earlier remarks when he said he wouldn’t sign a bipartisan bill on infrastructure unless it came paired with a reconciliation proposal, which Democrats could pass without Republican votes. The initial remark from Biden met with a flurry of criticism from Republicans, and it now remains to be seen if the bipartisan deal can recover.

McConnell said in a statement on Monday that Biden “appropriately delinked” the two issues, but went on to say that he is “calling on President Biden to engage Leader Schumer and Speaker Pelosi and make sure they follow his lead.” McConnell added that if that does not happen then “President Biden’s walk-back of his veto threat would be a hollow gesture.”

The remarks focus a spotlight on congressional Democratic leaders who are trying hard to thread the needle on infrastructure while balancing demands from moderate and progressive factions within the party. Pelosi said last week that the House won’t take up the bipartisan infrastructure bill until the Senate passes a larger, more sweeping infrastructure package through budget reconciliation.

A group of 11 Republicans signed onto the bipartisan infrastructure framework, but whether they continue to stand by it remains to be seen. Already, one of that group, GOP Sen. Lindsey Graham of South Carolina, has warned he will vote against the bill if Democrats hold it up to get reconciliation done.

“We would say, ‘OK, you killed the bipartisan deal. But OK, you gave us some good ideas. That’s good. And you’re going to see your priorities included here in reconciliation. … The bill will be better because we solicited your input,” he said.

Kaine said of McConnell: “It’s not unlike him to sometimes pull the football from the kicker is just about to kick it. I’ve seen him do that. … He’s pretty inscrutable.”

Kaine also said that Democrats are engaged in talks this week to sort out the overall price tag of the reconciliation bill — and will try to come to an agreement among themselves by the time they return to session in July.

The goal, he said, is to get an agreement that could win over all 50 Democrats on an overall number — but there are a variety of views on the subject.

“I think the key here is let’s all get on the same page on this side,” Kaine told CNN.

Kaine said he has proposed a price tag near $4 trillion — which is higher than the $2 trillion proposed by Sen. Joe Manchin and lower than the $6 trillion number that Sen. Bernie Sanders floated — and is line with Biden’s number for his jobs and families plans.

Kaine said he spoke with Manchin over the weekend — and the West Virginia Democrat told him: “We need to get the bipartisan deal done so we can get the reconciliation deal.”

Kaine added: “Now we will have differences of opinion about what should be in the reconciliation bill — that stands to reason. That we’re going to do one I think that should be a uniform Democratic position.”

Schumer and Sanders have asked their members for input on the overall dollar amount they’d be willing to support.

“There’s a lot of discussion about the price tag that’s going to happen this week,” Kaine said.

This story has been updated with additional developments Monday.