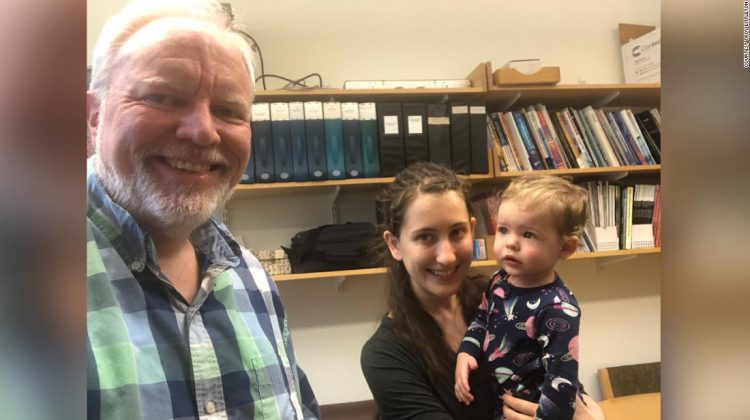 But when she gave birth to her daughter, Katie, in July 2020, the coronavirus pandemic was surging. She and her husband, Steve Cunningham, had to buy a car because they could no longer rely on public transportation. One of them always needed to be around to take care of Katie — they couldn’t count on friends or family to step in, day cares were shut down, and they couldn’t risk taking her to public places because of Covid-19.

As the world started to open back up, Karen’s biology lab professor, Troy Littleton, wanted to make things easier for her return to work. So he helped buy Katie a crib for his office, where she could stay during those in-between times when Steve needed to run to the store for diapers and Karen was working in the lab.

“People shouldn’t feel like they have to choose between being a scientist and having a family,” Karen said. “Making it financially possible for people to have a child during graduate school, which takes up most of your 20s, would be very helpful for keeping women in the academic pipeline.”

A picture of the crib in Littleton’s office went viral on Twitter, sparking conversation on child care being inaccessible during the pandemic, especially for new and working mothers.

“You don’t expect the world to be so dangerous for your baby,” Karen said. “You expect to be able to take your baby out to the grocery store and coffee shops. We expected to have Katie in day care at three or four months, depending on how we felt about things at the time, and that option was off the table.”

More than 2.3 million women left the workforce between February 2020 and February 2021, according to the National Women’s Law Center. This sunk the participation rate of women working down to 57%, a level last seen in 1988, the organization told CNN in April.
Several studies and surveys done during the pandemic showed that female academics were submitting and publishing fewer articles, including a study of 3,210 professors from March where 69 percent of female caregivers said they spent less time on peer-reviewed articles during the pandemic.

“I kind of felt like there was a tornado, and Katie was right at the center when we were (spending time) with her,” Karen said. “Everything just was calm and happy, but along the edges, all around, is all of this dizziness and uncertainty.”

Steve works as a full-time teacher, so during the summer, he’s been able to take care of Katie while Karen works. But Karen said her situation is the exception.

“These sort of ideas are built into the system, that it’s very difficult to have a child and be a grad student, often create these sort of invisible barriers that we never even see, but they keep many women from entering STEM to begin with,” Littleton said. “Having a policy where there’s clear support laid out, that is not something you have to go dig up and find and fight for, that every student has access to, will be very helpful.”