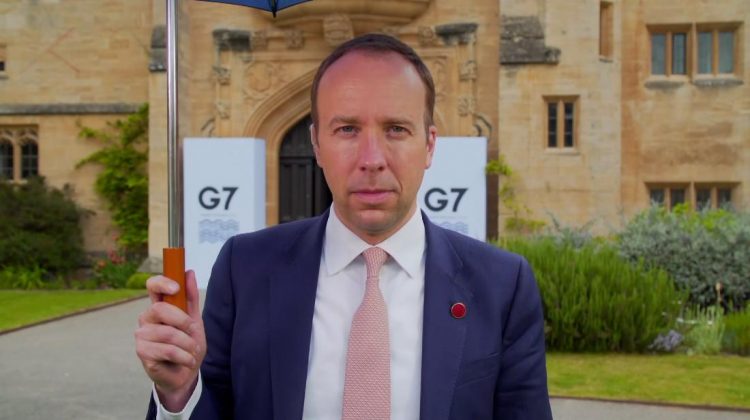 It isn’t the fact that the woman in question was not Hancock’s wife, nor that the pictures meant Hancock was breaking his own government’s Covid rules, that is most freaking out Westminster colleagues.

It’s that the images came from a security camera in Hancock’s office — and that he seems to have had no idea it was filming him.

The security implications for this are enormous and the opposition Labour party is demanding a sweeping review of security across government buildings.

“This is not about Matt Hancock’s hypocrisy being exposed, it’s about the potentially huge risks posed by such a lax approach from Government to security in its own buildings,” said Conor McGinn, Labour’s shadow security minister.

“The Government must urgently review all of its key buildings, have the intelligences agencies sweep them for bugs and unauthorized CCTV, and address the speculation about a private company with links to China having access to Whitehall’s inner sanctums,” he added.

Whitehall is a major thoroughfare through Westminster where a lot of government buildings are based, and the term is colloquially used to refer to the UK’s civil service.

For what it’s worth, Downing Street is not officially commenting on the matter beyond saying there will be an internal review and guiding away from all speculation on foreign involvement.

Government officials suggested to CNN that the fact a camera ended up in the office of a senior cabinet minister was an error rather than conspiracy. They pointed to the fact that the building is rented from a private landlord and that the camera should have been taken down in 2017 when the government department relocated.

However, the fact that any information from inside what is supposed to be a secure office was taken from the building and handed to an external figure — in this case, the press — is deeply concerning for those who know what happens inside government.

“All sort of meetings take place in a cabinet minister’s office, well beyond the reach of your brief,” says David Davis, the UK’s former Brexit secretary. “You could have classified documents on a desk; you could have briefings on matters of national security.”

This hyper-sensitivity is far from hysterical. The sorts of conversations that take place in the official offices of the most senior people in the government of a G7 nation are obviously very sensitive.

“It isn’t just that camera was there in the first place that worries me as such,” says a current government minister. “It’s that we didn’t have sufficient safeguards to stop a human being with malign intent from leaking that information to a newspaper. Replace an affair with sensitive defense plans and a newspaper with a foreign adversary, and you start to understand why every minister I’ve spoken to is very concerned.”

Davis explained that when he first became a cabinet minister, one of his senior civil servants warned him that he was now “a subject of interest to every intelligence agency in the world.”

Beyond national security and secrets falling into the hands of Britain’s enemies, Hancock’s office has hosted some of the most sensitive policy discussions of any cabinet minister in recent years because of the pandemic.

“Over the past year, Matt has invited people from all across parliament, from private industry, scientific experts, you name it, to discuss things in private about how to tackle this virus,” says a senior Conservative source. “Those conversations need to take place in private because if, say a chat looking at models showing numbers of deaths in different scenarios leak, the public would go doolally.”

Worries over information security could also lead to a damaging chilling effect within government.

“Governments need to be able to discuss stuff in private so that all options can be considered without political fallout,” says Tim Durrant, associate director of the Institute for Government think tank.

“Dismissing ideas that are on the surface a little out there could lead to poorer policy decisions ultimately being made. If ministers cannot be certain their conversations remain private, that could be very damaging for government overall,” he adds.

The fear of further security blunders in Westminster hasn’t calmed just yet.

Robert Buckland, the justice secretary, told Sky News that he has asked his department to be “swept just in case there are unauthorized devices in there that could be a national security breach.”

Hancock’s successor, Sajid Javid, told reporters that the offending camera had been disabled.

Ministers past and present will tell you that if you have an important job in government, you are always at risk of being watched.

The Hancock affair could have been much worse. The existence of the camera was a mistake, there is no suggestion it was a deliberate spying attempt, and the content of the leak was not of huge national importance.

However, modern espionage often preys on weak links and amateurish mistakes. If the camera footage had been exploited by an enemy, Hancock might have been open to blackmail.

So while it may center around a politician’s private life, this episode has served as an embarrassing reminder that leaks will always happen and people outside of government will always want to see them. The UK might thank its lucky stars that this time, it was about a relatively trivial matter.