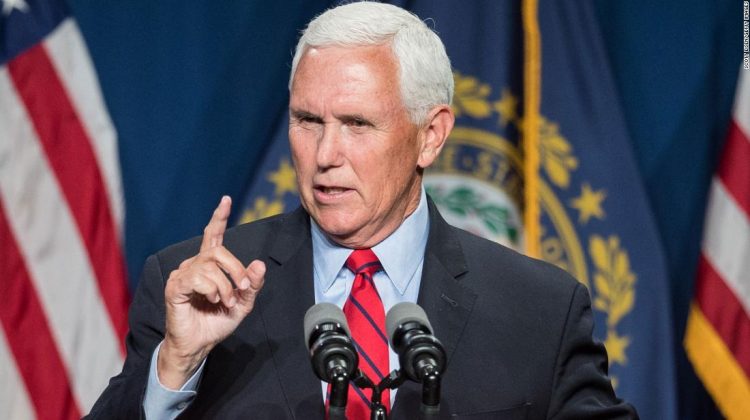 Shouts of “traitor” and “freedom” were heard coming from a small group within the audience as Pence took the stage. Wearing red “Make America Great Again” ball caps, they were immediately escorted out of the conference hall by law enforcement.

One of the hecklers later told CNN that she interrupted Pence “because he’s a traitor,” presumably referring to Pence’s role in validating the 2020 election results during Congress’ certification vote on January 6. Pence has previously been criticized by Trump for proceeding with the certification, which took place after Trump-aligned protesters stormed the US Capitol, including some who threatened to “Hang Mike Pence.”

A police officer did not reply when CNN asked if the female heckler at Friday’s speech was under arrest. Pence’s team also declined to comment on the incident.

The moment came before Pence criticized Vice President Kamala Harris for declining to visit the US-Mexico border during a recent immigration-focused trip to Central America.

Echoing a complaint lodged by other Republicans in recent weeks, Pence said it was “past time for our current vice president to go to the border, put our policies back into effect and end the Biden border crisis today.”

“Literally, in five months they turned the most secure border in the world into the worst border crisis in American history,” he charged in a speech lasting about 30 minutes at The Faith & Freedom Coalition’s annual Road to Majority Conference.

Pence, who only recently reemerged onto the public stage with appearances in South Carolina and New Hampshire, used the occasion on Friday to embrace former President Donald Trump and argue that Republicans are well-positioned to retake control of Congress and the White House in the November midterm elections and in 2024.

A rumored presidential hopeful himself, much of Pence’s remarks focused on Biden and his policy agenda — including a critique of the Democratic president’s “weak leadership abroad” that Pence claimed was on display during Biden’s first foreign trip over the past week.

“It’s amazing to think in 2020 Joe Biden actually campaigned as a moderate and he’s governed as one of the most liberal presidents in history,” Pence argued, adding that the Biden-Harris administration is “intent on transforming our country along the agenda of the radical left.”

“We don’t have to exchange the American dream for a socialist nightmare,” Pence said.

Despite facing ongoing criticism from Trump over his refusal to back the former president’s unconstitutional ploy to overturn the 2020 election outcome, Pence weaved praise of his former boss into his remarks. At one point, he said it was “the greatest honor of my life” to serve as vice president alongside Trump.

“President Trump taught us what Republicans can accomplish when we stand firm on conservative principles and don’t back down,” he said. “In 48 months, the Trump-Pence administration achieved the lowest unemployment, the most secure border and the strongest military in the history of the world.”

Unlike his most recent public appearance at a Republican fundraiser in New Hampshire, Pence did not specifically mention the January 6 riots at the US Capitol during his speech in Kissimmee, Florida. Rather, the former vice president stuck to a familiar script filled with references to religion, cultural flashpoints and his own political identity.

“I’m a Christian, a conservative, and a Republican in that order and I am honored to stand before you today,” Pence said at the outset of his appearance, borrowing a line from his stump speech as a then-vice presidential contender in 2016.