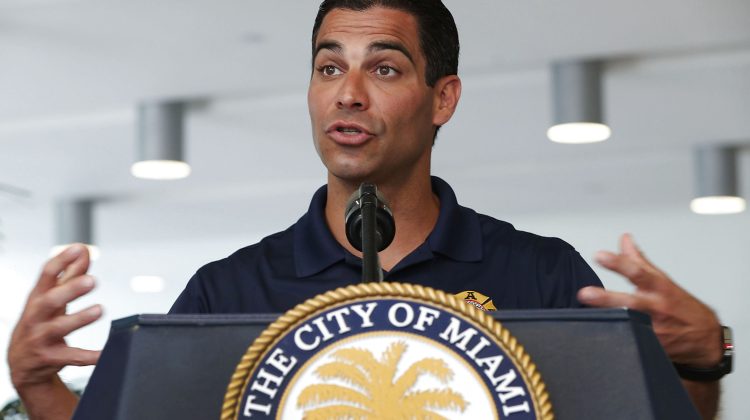 MIAMI – Mayor Francis Suarez says Miami’s doors are open to bitcoin miners in China who are currently scrambling to find a new home after Beijing made it clear that their days are numbered.

Mining is the energy-intensive process which both creates new coins and updates the digital ledger of all transactions of existing tokens. More than half of all miners are currently based in China, but a mass exodus is already underway. Where they’re going, however, isn’t yet clear.

While Suarez told CNBC he hasn’t personally received any calls from Chinese miners, the mayor is looking to patriate this mining diaspora by promoting the city’s essentially unlimited supply of cheap nuclear energy.

“We want to make sure that our city has an opportunity to compete,” he said. “We’re talking to a lot of companies and just telling them, ‘Hey, we want you to be here,’” he said.

Rolling out the red carpet

Bitcoin miners are location agnostic; all they need is a rig and a good internet connection. What varies place to place, however, is the cost of energy. And ultimately, what miners care about most is finding the cheapest source of power out there to drive up their profit margins.

That’s why Mayor Suarez, one of the most crypto-friendly politicians in the United States, is making big promises on the cost of doing business in Miami. Suarez has been a crypto believer for years, but he took the plunge into investing in bitcoin and ethereum once he saw the federal government pass a $1.9 trillion American rescue plan, because he “realized that what was inevitable – and already happening – is inflation.”

He emphasized the city’s reliance on nuclear power as a source of clean, inexpensive energy.

“The fact that we have nuclear power means that it’s very inexpensive power,” Suarez told CNBC in an interview from a second-floor conference room in the Miami City Hall building.

Less than an hour from City Hall is the Turkey Point Nuclear Plant, which helps to power Miami, according to data from the Energy Information Administration. The Bureau of Labor Statistics reported an average electricity per kilowatt hour cost of 10.7 cents in Miami, versus the national average of 13.3 cents.

Across the state of Florida, nuclear energy is the second-biggest power generator, after natural gas. Suarez is already in talks with Florida Power & Light Company to figure out how to further drive down the price of energy.

“We understand how important this is…miners want to get to a certain kilowatt price per hour. And so we’re working with them on that,” Suarez told CNBC.

The mayor is also considering a mix of other incentives, like enterprise zones specifically for crypto mining. Enterprise zones are areas in which tax concessions, infrastructure incentives, and scaled-back regulations are offered to companies, with the hope that these breaks will encourage investment and create jobs.

Miami is not alone in its ambitions to capture the attention of bitcoin miners.

“There is demand in North America…so the question will be one of capacity,” said Alyse Killeen, founder and managing partner of bitcoin-focused venture firm Stillmark.

Where physical infrastructure and capacity is concerned, the mayor is optimistic the city can meet the needs of miners.

“We were one of the first cities in the world to have a data center, and a mining hub is very similar to a data center,” he said.

But even Suarez admits that a lot needs to happen first.

“Building a mining facility is similar to building a data center. It’s not something that happens overnight,” Suarez told CNBC.

Miami is also not competing in a vacuum here in the U.S. States like Texas and Wyoming are also fast becoming hot mining destinations, thanks to their cheap energy mix and crypto-friendly policies.

“Nuclear has actually been safer than any other source of [power] generation,” Bill Gates told Andrew Ross Sorkin on CNBC’s “Squawk Box.” “You know, coal plants, coal particulate, natural gas pipelines blowing up. The deaths per unit of power on these other approaches are far higher,” Gates said.

But there are a few drawbacks to harnessing nuclear energy. While nuclear power reactors do not produce air pollution or carbon dioxide while operating, emissions are generated when constructing nuclear power plants and in the decommissioning of reactors.

“Miners’ capitalist motivations push them toward green energy,” she said.

Whether Chinese miners actually make the move to Florida remains to be seen, but there are signs of progress in Miami’s aspirations to become a mining hotspot. Mayor Suarez says he is currently fielding calls from different mining companies outside China that are considering a move to the sunshine state.

The establishment vs. bitcoin

Miami isn’t just after bitcoin miners. The city wants to become a crypto destination for all sorts of professionals interested in the space.

To draw them, the mayor has been trying to make bitcoin mainstream by advocating for policies that would enable city employees to be paid and residents to pay their taxes in the cryptocurrency. The city itself is considering holding it as an asset on their balance sheet. Suarez says they now have legal clearance to proceed, and his office is currently going through the ‘Request for Proposal’ stage, which is the next leg of the approval process.

Though the crypto world is often seen as anti-establishment and opposed to government, Suarez doesn’t think the movement is at cross purposes with his administration.

“That’s why I jumped in on crypto, and that’s why there was such a crazy response, because [people] saw that government was not antithetical; government was not trying to kill it,” he said. “On the contrary…the city of Miami understands how fundamentally important it is to our future and how it could change the paradigm in the way people live their lives.”

He also talked a little bit about climate change and the prospect of rising sea levels challenging the city’s existence in coming years. Miami is a low-elevation city, and “dry day flooding” has become common in recent years.

“100% Miami still exists in 20 years,” he said, emphasizing the money and effort Miami is putting into resilience.

“I do recognize it as a threat. You know, you can’t just put your head in the sand and pretend like it’s not happening, it doesn’t exist. We’re one of the few cities in the world that is actually putting up significant amount of resources, $200 million from our Miami Forever Fund.” He added, “And now our challenge is to be the most water resistant city on the planet.”