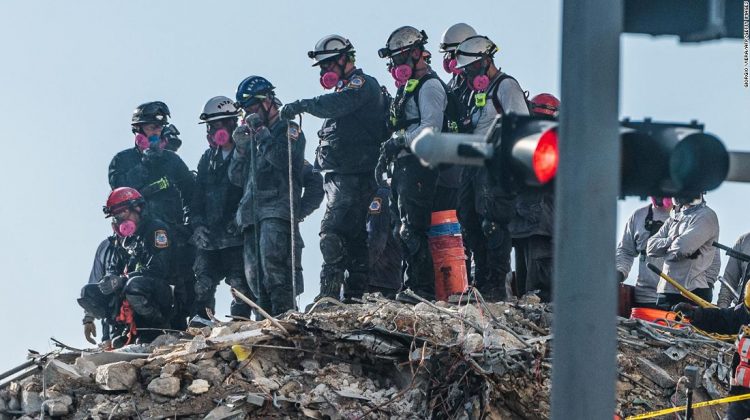 Residents of the building also had raised concerns over tremors during construction of a nearby building in 2019, according to documents obtained by CNN and interviews with the family members of people missing in the collapse.

Donna DiMaggio Berger, an attorney for the condominium board, told CNN’s Chris Cuomo on Monday that she didn’t think the building was in a state of disrepair prior to its collapse.

The condo owners were facing assessments for $15 million worth of repairs to the building, with payments set to begin July 1.

The association approved the assessment in April to complete repairs required under the county’s 40-year recertification process, according to documents obtained by CNN.

The investigation will take months

While there are no clear answers on the cause, early signs point to some failure in the lower reaches of the 13-story building, perhaps in its foundation, columns or underground parking garage, according to experts.

A pool contractor who was servicing the condo pool 36 hours before its collapse told the Miami Herald he had seen standing water and cracks in concrete underneath the pool deck.

She noted that the photos were reportedly taken in the equipment room on south side of the basement structure, rather than the north side, where the structure caved.

Families and friends are waiting for answers

Family members of those still missing are waiting for any answers they can get as the search continues.

“I have 100% faith in a lot that’s going on here,” Kevin Spiegel, the husband of Judy Spiegel, told CNN’s Wolf Blitzer. “Honestly, I think we all want more information.”

Their daughter Rachel told CNN’s Don Lemon she’s nervous about the fires from the collapse and how the heat and smoke may be impacting rescue efforts. “I’m very worried,” she said.

However, she told CNN she was very optimistic about the expert teams from abroad that have come to help with the rescue attempt. “There are so many teams from other countries coming in and coming to help us, which is fantastic.”

Ronit Felszer and Carlos Naibryf told CNN’s Alisyn Camerota on Monday that they are being realistic about the possible outcome.

Carlos Naibryf said his son “was a 21-year-old young adult. Bright. Everywhere he went, he made an impact … now he’s at U. Chicago, physics major.”

When Camerota asked the parents if they’re still believing in a miracle, Felszer shook her head.

“We want to believe in a miracle because we still don’t have the physical presence, in part or in whole, of our son,” she said.

“A miracle can come, yes, but we have to be very realistic,” the father told CNN.

“These men and women aren’t pausing,” Florida CFO and state Fire Marshal Jimmy Patronis said. “They continue to have a type of momentum and motivation that is really, really inspiring

Victims have been found in different areas as the teams search through various search grids, rather than one isolated area, according to Cominsky.

While rescuers were impeded by weather conditions and smoke conditions earlier in the week, conditions have improved but remain dangerous in the search area.

“There’s definitely a concern with the rain, and now the debris, and possibly sliding — so I mean it’s an extremely dangerous situation,” he said. “It’s a very, very difficult, very, very challenging situation, and you know we’re doing the best that we can what we’re trained to do and will definitely continue moving forward.