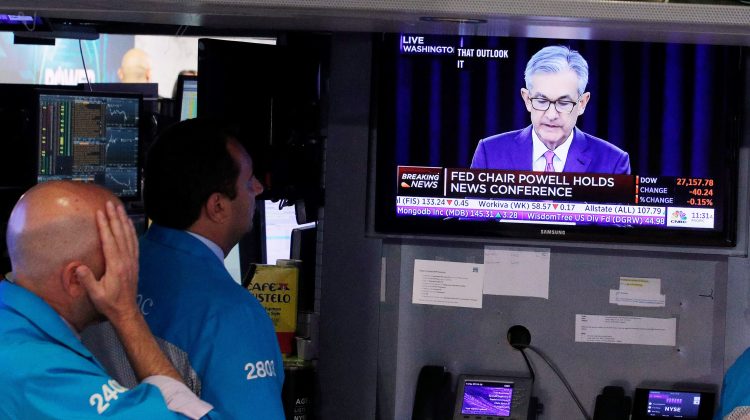 LONDON — Volatility is back for global stock markets, triggered by uncertainty over central banks’ plans for monetary policy and rising Covid-19 cases around the world.

The VIX volatility index, a real-time measure of volatility expectations over the next 30 days, inched fractionally lower in extended hours early Monday, but held above the 20 mark often seen as a separator between normal and high volatility.

Last week, the VIX spiked more than 16% to its highest point since May, as markets digested a surprisingly hawkish turn from the U.S. Federal Reserve.

The Dow Jones Industrial Average also logged its worst week since October, and futures contracts tied to the index initially fell more than 200 points in early premarket trade on Monday before reversing course to indicate a higher open.

Monday’s choppy trade also played out in Asia, where Japan’s Nikkei 225 closed 3.3% down, and Europe, where the continental Stoxx 600 index dropped 0.8% in early trade, only to recoup its losses and advance into positive territory, returning to the flatline several times.

Matteo Andreetto, head of State Street Global Advisors’ SPDR ETF business in the EMEA region, told CNBC on Monday that with Covid cases rising, the potential for monetary tightening and high equity valuations on a historical basis, a market correction could be possible.

“I think what will most likely happen is that volatility will clearly pick up. Data on the Covid side is clearly very high, and we are seeing a level of discrepancies between the development of the vaccination programs in some of the largest countries and what is going on in emerging markets,” he said.

“That could potentially cause a difference in terms of speed of the recovery on a global basis.”

Markets have been buoyed over recent months by gradual indications of a recovery from the pandemic and consistent, unprecedentedly loose monetary conditions from central banks.

However, rising inflation has introduced speculation that central banks could look to pull back some of that stimulus sooner rather than later, a suspicion enhanced by the Fed’s announcement that it expects to hike interest rates twice in 2023.

“Where we see some exaggeration is mainly that the (Federal Open Markets Committee) minutes show that the FOMC members have brought their expectations in line with what the market expectations were before the FOMC (meeting),” he said.

He added that the potential rate hikes were still two and a half years away, and as such, equity markets could continue to perform well in the coming months.

Monier also noted that so-called growth stocks, like tech, did not pull back as sharply as some value and cyclical stocks, like industrials and materials, following the Fed meeting.

So-called value stocks are viewed as undervalued and are expected to benefit from the economic recovery after the pandemic. Growth stocks, on the other hand, are expected to rise at a faster rate than the rest of the market. Cyclicals are those whose performance generally aligns to the trajectory of the global economy.

“It is related to the fact that it is very much interest rate driven. Interest rates go up, this is the reflation trade, this is more the value and cyclical stocks going up, and conversely when interest rates go down, as was the case since the FOMC, tech starts to outperform,” Monier added.

“We think there will be a lot more volatility in the weeks to come.”