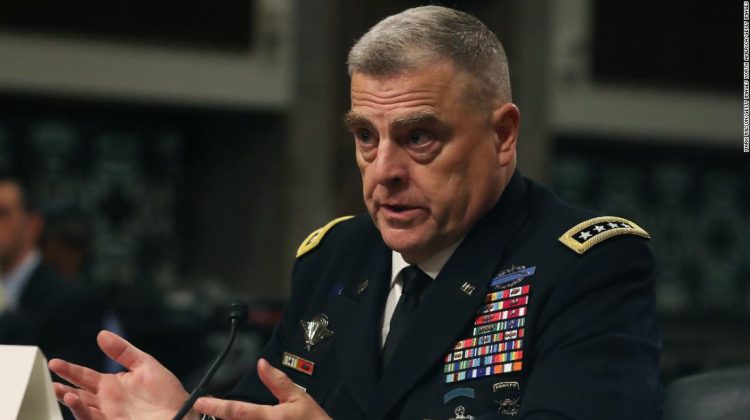 Responding to a question by Rep. Mike Waltz about the appropriateness of a seminar at the United States Military Academy at West Point called “Understanding Whiteness and White Rage,” Milley responded: “I want to understand White rage. And I’m White. And I want to understand it.”

Tying the question to the January 6 insurrection, Milley asked: “What is it that caused thousands of people to assault this building and try to overturn the Constitution of the United States of America? What caused that? I want to find that out. I want to maintain an open mind here.”

Milley called it “offensive” that service members were being called “quote, ‘woke’ or something else, because we’re studying some theories that are out there.”

“I’ve read Mao Zedong. I’ve read, I’ve read Karl Marx. I’ve read Lenin. That doesn’t make me a communist,” Milley said. “So what is wrong with understanding, having some situational understanding about the country for which we are here to defend?”

Milley’s forceful pushback came as military officials have faced a chorus of GOP voices questioning the Defense Department’s efforts to promote diversity and combat extremism in the ranks.

The exchange took place during a House Armed Services hearing on the Defense Department budget, where Defense Secretary Lloyd Austin faced similar questions on “critical race theory,” a decades-old academic concept that recognizes systemic racism as part of American society, that has become a political talking point for Republicans nationwide.
Embattled Republican Rep. Matt Gaetz, who was seen shaking his head during Milley’s comments, later tweeted a video of Milley’s remarks, writing in the tweet: “With Generals like this it’s no wonder we’ve fought considerably more wars than we’ve won.”
Gaetz had earlier asked Austin about the stand down he ordered regarding extremism, claiming he had heard complaints from service members from “majority minority” units, as well as what Austin thought of critical race theory.

Austin responded by calling the GOP-driven conversation about critical race theory “spurious” and said that he had received far more positive feedback on the stand down than Gaetz’s “anecdotal” negative feedback.

Gaetz questioned whether Austin was only receiving feedback from subordinates “concerned about criticizing your decision,” which led to Austin speculating that the feedback Gaetz was receiving were from people who “are telling you what you want to hear.”

“I trust my leadership from top to bottom that they will give me fair and balanced and unvarnished input,” Austin said.

The strong responses from Milley and Austin come a week after Chief of Naval Operations Adm. Michael Gilday fired back at Republican members of Congress who criticized his recommendation of the book “How to Be an Antiracist” by Ibram X. Kendi on a voluntary reading list for Navy sailors.

Gilday further defended his recommendation as part of a national security concern, arguing that conversations about racism and diversity in the military are necessary to combat misinformation by US adversaries.

“Everybody has to be in a position to weigh fact from fiction, even our sailors. They’re bombarded every day by misinformation — much of it comes from China and Russia — on this issue that’s getting at our national psyche,” said Gilday. “I’m trying to get after it in the Navy.”