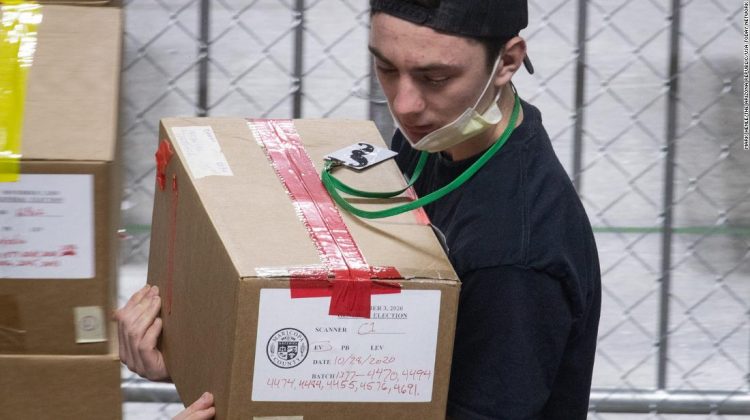 Neither the letter nor the statement mention the potential cost of replacing the machines or who would be responsible for covering it.

Maricopa County is roughly halfway through a lease contract with Dominion Voting Systems for the machines. It does, however, note the county is working on interim plans to prepare for upcoming elections.

“With the backup equipment and the other certified tabulation equipment not subpoenaed, the Board of Supervisors, Elections Department and Recorder’s Office are working with our current vendor to replace the subpoenaed equipment so we will be able to serve voters for the November 2021 election,” the county said in its statement.

Fueled by former President Donald Trump’s claims about widespread fraud in the 2020 election, Arizona state Senate Republicans demanded an election audit of the results in Maricopa County that kicked off in April. The audit was conducted by the Florida-based company Cyber Ninjas, which has no experience auditing elections and whose chief executive officer promoted Trump’s conspiracy theories about the election on social media.

The county turned nearly 400 tabulation machines over to the state Senate after GOP lawmakers subpoenaed the materials and a judge ruled that county officials had to comply.

Hobbs sent a letter in May urging the county not to redeploy any of the subpoenaed election equipment in future elections and instead acquire new machines “to ensure secure and accurate elections in Maricopa County going forward.”

She cited Cyber Ninjas’ failure to be transparent with what they did with the equipment, allow election officials or expert observers with the secretary of state’s office to remain with the equipment during the process, and to provide a “continuous, clearly visible livestream of the area” of where the equipment was kept.

“I have grave concerns regarding the security and integrity of these machines, given that the chain of custody, a critical security tenet, has been compromised and election officials do not know what was done to the machines while under Cyber Ninjas’ control,” Hobbs wrote.

The partisan audit wrapped up last week and its findings have not yet been publicly released, but election audit experts and nonpartisan observers of the proceedings have said that Cyber Ninjas’ methods are deeply flawed and do not follow standard election auditing procedures, which could introduce errors and bias into the results. Republican Maricopa County officials have also harshly criticized the state Senate’s audit.