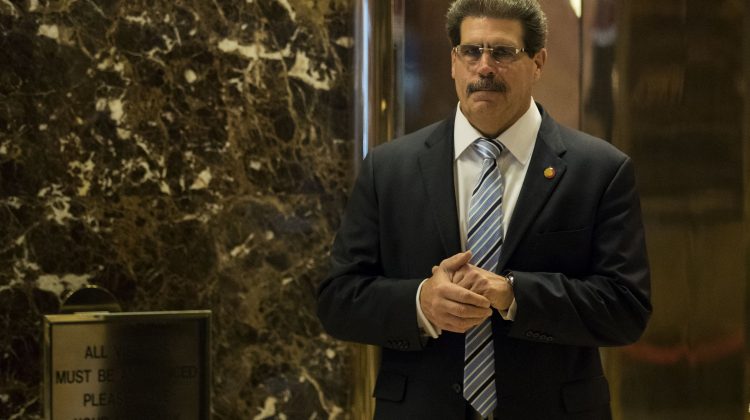 Matthew Calamari, an executive vice president with the Trump Organization, stands in the lobby at Trump Tower, January 12, 2017 in New York City.

The Manhattan district attorney’s office is eyeing Matthew Calamari, a top executive in the Trump Organization, as part of its criminal investigation of former President Donald Trump and his company, NBC News reported Tuesday.

The office of DA Cyrus Vance Jr. already was known to be focusing as well on another high-ranking Trump Org executive, Chief Financial Officer Allen Weisselberg, in the probe.

Calamari, who is chief operating officer of the Trump Org, and Weisselberg have not been charged with any wrongdoing. Neither has the company nor Trump, who claims the probe is a witch hunt.

Calamari is a former bodyguard to Trump. His son, Matthew Calamari Jr., is the firm’s director of security.

A 1993 book about Trump features a scene where Trump asks Calamari, then his bodyguard, during a ride in a limousine, “You’d do anything for me, wouldn’t you Matty?” The Washington Post noted in 2019.

“Yes sir, Mr. Trump,” Calamari answered, according to the Harry Hurt III biography, cited by the Post, “Lost Tycoon: The Many Lives of Donald J. Trump.”

“Moments later, Trump upped the ante: ‘Would you kill for me, Matty?'” the Post reported.

Both Calamaris have retained Nicholas Gravante Jr. as their attorney for Vance’s investigation. Granvante declined to comment Tuesday when contacted by NBC News.

A spokesman for Vance’s office declined to comment to CNBC. A spokeswoman for the Trump Organization did not immediately return a request for comment.

The Wall Street Journal first reported Vance’s focus on Calamari, saying prosecutors are investigating whether he received fringe benefits tax-free from the company.

Vance is using a special grand jury for his investigation, which is eyeing whether the Trump Organization illegally misstated the value of real estate assets for various purposes, either to get tax benefits or better loan and insurance terms.

Appearing before Congress in 2019, Trump’s former personal lawyer, Michael Cohen, testified that Calamari and Weisselberg were among those who would have knowledge of whether Trump inflated the value of his assets for insurance purposes.

Trump denies Daniels’ claim, and that of an affair with Playboy model Karen McDougal, who herself received a hush money deal before that election from the publisher of The National Enquirer, a Trump-friendly supermarket tabloid.

Cohen has been cooperating with Vance’s investigation, meeting with prosecutors nine times.