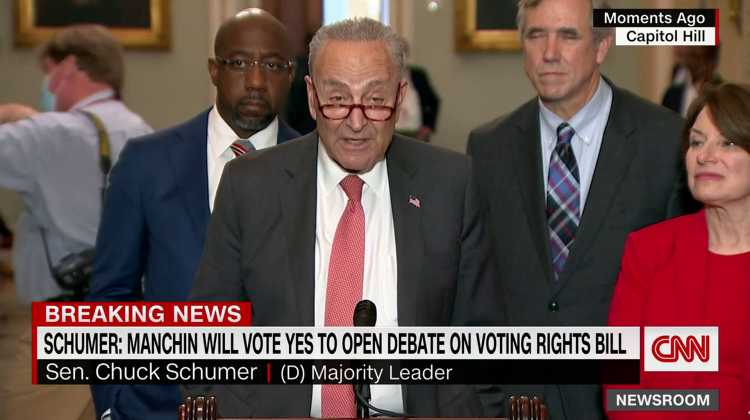 Former President Barack Obama invoked the Jan, 6 insurrection at the Capitol on Monday to advocate for the For the People Act, the voting rights bill that is set to face its first Senate procedural vote today.

Obama, during a grassroots conference call for the National Democratic Redistricting Committee, said that the insurrection proved Americans cannot “take our democracy for granted,” arguing the United States could become one of the many countries around the world that were “once vibrant democracies” but who went in “reverse” because anti-democratic decisions.

“The violence that occurred in the US Capitol on January 6, just a few months ago, should remind us that we can’t take our democracy for granted. Around the world, we have seen once vibrant democracies go into reverse, locking in power for a small group of powerful autocrats and business interests and locking out of the political process dissidents and protestors and opposition parties and the voices of ordinary people. It is happening in other places around the world and these impulses have crept into the United States. We are not immune from some of these efforts to weaken our democracy,” Obama said.

The former president went on to say that “our own history” should remind Americans about the importance of fighting for democracy, adding that recent attempts to pass restrictive voting laws mean “we are going to have to be vigilant in fighting back attempts by the few to silence the many. And that is why what is happening in the Senate is so important.”

Obama opened the call by noting that since he left office in 2017, he has tried to “not to weigh in on the day to day scrum in Washington.” But that the vote set to take place this week “is more than just a particular bill coming up or not coming up to a vote,” calling the For The People Act a “product of compromise.”

Obama specifically invoked West Virginia Sen. Joe Manchin’s name when he spoke about compromise, calling the bill a group of “common sense reforms” that most Americans agree on.

Obama made clear that the bill being considered doesn’t have “everything I would like to see” in a voting rights package, but said it is an important step to ensuring the future elections are fair. The former President, who was joined by former Attorney General Eric Holder on the call, slammed Republicans for planning to use the filibuster to stop consideration of the measure.

“Right now at least, Republicans in the Senate are lining up to try to use the filibuster to stop the For the People Act from even being debated,” Obama said.

“Think about this: In the aftermath of an insurrection, with our democracy on the line, and many of these same Republican senators going along with the notion that somehow there were irregularities and problems with legitimately in our most recent election. They are suddenly afraid to even talk about these issues and figure out solutions on the floor of the Senate. They don’t even want to talk about voting. And that is not acceptable,” he said.