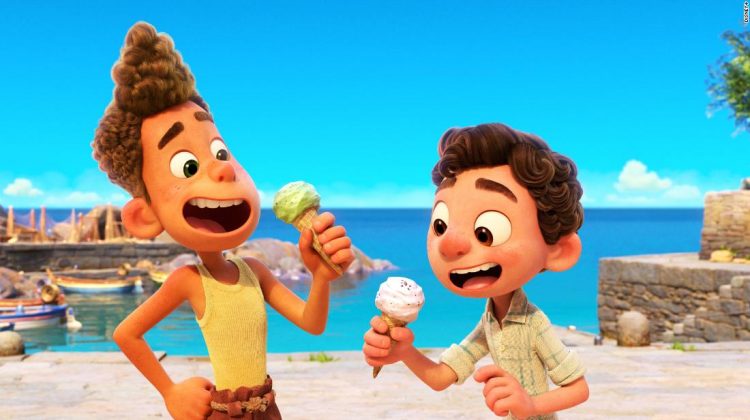 The title character owes a debt to another curious ocean-dweller that helped launch the modern resurgence of Disney animation, “The Little Mermaid.” Discontented with his life under the sea, Luca (voiced by “Room’s” Jason Tremblay) yearns for an existence he can scarcely fathom above the waves, which seems magical to a young sea monster (or “little merman,” in a sense).

Naturally, Luca’s inquisitive nature exasperates his mother (Maya Rudolph), who warns him, “The curious fish gets caught.” Indeed, he’s introduced nearly doing just that, coming too close to the fishing nets of a “land monster” from the quaint village nearby in the Italian Riviera.

On shore, for some reason, sea monsters assume human form, which is where Luca meets Alberto (“It'” and “Shazam!’s” Jack Dylan Grazer), a slightly older sea monster with a wandering spirit who has this whole land thing down — or at least, insists that he does. Their joint discoveries carry the story for a while, before they meet a human girl, Giulia (Emma Berman), who gives them the half-baked idea of entering a local race, and dazzles Luca with tales of her world.

It’s around then that the film, directed by Enrico Casarosa (whose credits include the Oscar-nominated Pixar short “La Luna”), begins to feel like it’s treading water, as the boys experience a rift thanks to Luca’s friendship with Giulia, and weather a series of near misses every time one of them gets wet, at the risk of exposing what amount to their secret identities.

Pixar movies have a habit for finding simple truths and tugging at the heartstrings, and “Luca” accomplishes some of that deftly enough before it’s over.

Mostly, though, it’s a bit of a bore when ashore — another tale of a kid who feels misunderstood and runs away from home (or the reef), forcing his parents (Jim Gaffigan plays dad) to contemplate whether they’ve been too rigid in demanding that he adhere to family traditions.

At its best, the film offers lovely glimpses of Italy, while adding to the relatively modest subgenre of human/sea-creature relations. There’s also a deeper undercurrent in the theme of hiding who you are.

Otherwise, it’s the sort of generic concept that’s pleasant enough but falls short of the high standards Pixar has set, and after the disappointing “Onward,” recently achieved again with “Soul,” which exemplified the ambition that “Luca” (the movie, not the character) conspicuously lacks. That applies to the casting as well, which includes squandering Sacha Baron Cohen in a throwaway role.

Studios have engaged in an imprecise science in deciding how best to exhibit films since the pandemic began, in some instances seemingly leaving money on the table by redirecting movies to streaming or offering them at home simultaneously with their release.

In the case of “Luca,” it’s easy to see why Disney opted to bypass theaters and go with the streaming flow. Because while it’s not bad, the movie ultimately feels like a little fish in a big pond.